The latest Guitar Hero is an Aerosmith fan's dream come true, but the game's narrow focus and lack of content will prove unappealing to many others.

There are two versions of the GH: Aerosmith available: One includes just the game, while the other contains a wireless guitar, some stickers, and the game. The guitar is essentially the same Gibson Les Paul that came with Guitar Hero III, only now it comes with an Aerosmith-themed faceplate. Several guitar controllers, such as the official controllers from Guitar Hero II and III, work with the game, as does the Fender Stratocaster from Rock Band.

With so many controllers compatible with GH: Aerosmith, it shouldn't be any surprise that it plays almost exactly like previous Guitar Hero games. Colored circles that correspond to the guitar's five fret buttons move downward along the onscreen guitar neck. When they reach the bottom, you press the proper fret button(s) and strum. If your timing's consistently right, you'll go on streaks and earn score multipliers. If you miss notes, you'll lose those multipliers, deplete your rock meter, and eventually fail the song. Certain song sections are highlighted and will fill your star power meter if played correctly. Once the meter is at least half full, it can be activated by tilting the guitar upward. Doing so makes you look super cool and increases your score multiplier. You'll want a high score not only because of the online leaderboards, but also because that's what determines your star rating at the end of each song. The more stars you get, the more cash you'll earn. Money earned in Career mode can be used to unlock songs, outfits, additional characters, and videos.

The big difference as to how this version plays compared with the last game is that GH: Aerosmith is easier. This can be attributed to several factors, such as the fact that Joe Perry's riffs are melodic and less complicated than GHIII's insanely difficult and often dissonant solos. But the friendlier difficulty was also a conscious decision by the developer. Hardcore series fans loved showing off their skills at "Through the Fire and Flames," in Guitar Hero III, but with each successive game in the series getting harder, many people found them to be too difficult. Expert difficulty in GH: Aerosmith is more akin to hard in Guitar Hero III, thanks to fewer notes and fewer chords, as well as hammer-ons and pull-offs that are easier to perform. If you've uploaded videos of your Guitar Hero prowess to the Internet, you'll likely blow through the game on expert on your first try with no trouble at all and find the game too easy. The majority of players, however, will appreciate the kinder, gentler, and more fun-to-play experience.

Career mode consists of 31 songs--19 from Aerosmith and 12 from other bands. An additional 10 songs are unlockable, all of which are Aerosmith tunes or Joe Perry side projects. The Joe Perry stuff isn't all that good (there's a reason why his solo career never took off), but the soundtrack offers a fairly comprehensive sample of the band's repertoire. You'll find older tunes like "Dream On," "Toys in the Attic," "Sweet Emotion," "Uncle Salty," and "Draw the Line." You'll also find songs from the post-1984 incarnation of the band, such as "Love in an Elevator," "Rag Doll," and "Livin' on the Edge." The group's 1986 version of "Walk This Way" with Run DMC is here, and it's awesome. The most recent songs are "Pink" and "Beyond Beautiful" from the band's 2001 album. Though most of the band's big hits are here, there are some notable omissions, such as "Dude (Looks Like a Lady)," "Janie's Got A Gun," "Big Ten Inch Record," "Cryin'," "Crazy," and "Deuces Are Wild." You can always nitpick song selection in a music game, but the band's catalog includes 14 studio albums, and Activision is asking full price, so you'd expect all of the big hits to be here. There's no support for downloadable content either, so you're stuck with what's on the disc. One song that's thankfully MIA is "Don't Wanna Miss a Thing," the sappy theme song from the movie Armageddon.

Only 30 percent of GH: Aerosmith's tracklist consists of bands other than Aerosmith. Most of the songs, such as The Cult's "She Sells Sanctuary," The Kinks' "All Day and All of the Night," Ted Nugent's "Cat Scratch Fever," and Mott The Hoople's "All the Young Dudes" are classic rock. The rest of the songs, such as "Always on the Run" by Lenny Kravitz featuring Slash and "Hard to Handle" by the Black Crowes are a little more modern, but none are more recent than Stone Temple Pilot's "Sex Type Thing" from 1992.

There are plenty of multiplayer options in GH: Aerosmith, but none of them are new to the series. You can play songs cooperatively with another player, though it's not necessary to do so to unlock all of the game's songs. One person plays lead guitar while the other plays rhythm guitar or bass depending on the song. Be warned: Even on expert difficulty, bass isn't difficult at all, so one player might be in for a less-than-thrilling experience. You can go head-to-head with another person both offline and online. Face-offs have you each play on the same difficulty and alternate riffs; both people play the same parts in Pro Face-off but are able to choose their own difficulty. Last and least is the lame Battle mode that lets you "attack" your opponent with broken strings or double, flipped, or flashing notes. Losing because of a fake broken string wasn't fun before, is not fun now, and will never be fun. Thankfully, the only time you're forced into a battle is during the single-player career in a solitary encounter against Joe Perry.

Guitar Hero: Aerosmith's presentation isn't markedly better than the last game, but it does differ in several ways. Steven Tyler, Joe Perry, Brad Whitford, Tom Hamilton, and Joey Kramer are all here (though only Perry, Whitford, and Hamilton are playable) in slightly realistic, mostly cartoony video game form. Career mode has also been tweaked a bit to take advantage of the band's presence. Each of the six venues has a special meaning to the band. For example, the high school gym was where they played their first gig, the Orpheum Theatre was the site of the band's big comeback, and the Rock-and-Roll Hall of Fame is pretty self explanatory. Before your first gig in each venue, a short video clip plays of the band members reminiscing about that particular location. These videos look low-budget and certainly aren't in-depth, but they're a neat way of integrating the band into the experience.

While it's entertaining to see a virtual Steven Tyler prance about the stage in a high school gym, the band's music is the real highlight of the show. The music sounds great and the songs that the band rerecorded for the game ("Dream On" being one) sound just like they did on the albums--possibly even better. It's always nice to have the original version of a song, but a few of the non-Aerosmith songs such as "Hard to Handle" and "All the Young Dudes" are covers. All of them are well done, so it's not a huge deal.

The biggest knocks against GH: Aerosmith are that it only has 41 songs (versus 70+ in GHIII), and if you're a Guitar Hero fan who doesn't like Aerosmith, you're not going to like a huge chunk of the game. If you're a big fan of the group you might enjoy the brief documentary videos, as well as seeing the band in video game form, but there's not much here for you if you're not fan or were hoping for new game modes. What's here is a lot of fun, but there's not enough content to justify charging full price. 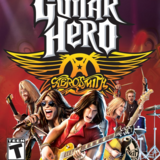 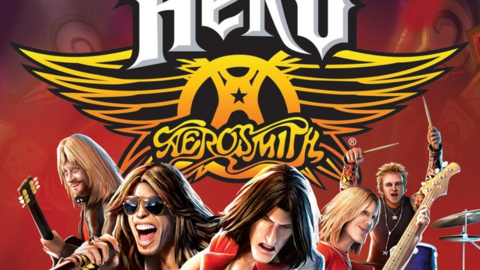 Guitar Hero: Aerosmith features tracks from the legendary rock band, as well as songs by those who have played with or inspired them.