Dust Strikers defies convention for the worse, resulting in an awkward and frustrating fighting game.

Guilty Gear Dust Strikers makes a strong case for sticking to a proven formula, because that's exactly what it refuses to do. Instead of bringing the great cast of outrageous characters and flashy moves to the Nintendo DS in the form of a standard 2D fighter, Dust Strikers mixes up the Guilty Gear formula with four-character battles, multilevel stages, power-ups, and touch-screen minigames. The result is a shallow, confused mess of a fighting game that's far more frustrating than it is fun.

The best part of Guilty Gear Dust Strikers is by far its great cast of more than 20 characters. There are no new characters to speak of, other than one extremely lame boss, but all the favorites--like Ky Kiske, the holy knight; Bridget the transvestite nun; Venom, the billiards-playing assassin; I-No, the rock-star witch; May, the pirate; and many more-- are on hand to do battle. The character sprites all look great and the attack animations are fantastic. It's expectedly not quite up to the standard of the console Guilty Gear games, but Dust Strikers still looks sharp and colorful on the DS

The problem is that there's often so much going on that you don't actually get to see most of the action. Most of the battles are four-player, free-for-all matches, which makes Dust Strikers much more akin to Guilty Gear Isuka than the original games in the series. The result is a jumbled mess of overlapping attacks that always seem to pile up in one corner of the screen. Because the characters can all occupy the same space, you'll often find yourself stuck in a corner with three stacked opponents doing everything from summoning dolphins to swinging guitars, all at lightning speed. Likewise, you can pull off your own special moves with a simple press of a button, which takes all the skill out of the game. In previous Guilty Gear games it was challenging to pull off super moves and lengthy combos, which made the fighting that much more satisfying. In Dust Strikers you simply have to mash buttons and wait for an opponent get in the way of your attack. Also, some of the moves are extremely cheap, and it makes the game feel unbalanced.

The only real challenge is staying oriented as people move about the screen. The stages in Dust Strikers are vertically designed and take up both the bottom and top screen on the DS. There are a series of platforms on each stage, so instead of fighting enemies to the left or to the right, you have to fight up and down as well. This added dimension results in some confusing and awkward moments, because your fighter doesn't automatically turn to face his or her opponents. Instead, you have to tap the direction you want to face to manually turn your character around. When there are four characters onscreen and the battle is moving quickly, you'll often find yourself completely turned around, and it isn't odd to end up launching a string of attacks at an empty space while your opponents whale on you from behind.

As if fighting four characters on four levels simultaneously wasn't hectic enough, there are also items that you can pick up and use during the fights. These items range from lightning bolts to extra health, and once you pick one up you have to touch the bottom corner of the screen to use it. Some of the items can be helpful, but others are useless. One item in particular swaps the location of all the fighters onscreen except for the one who used the item. You'll be fighting on the lower screen and all of a sudden you'll appear on the top screen. It breaks up the action, as is probably the intention, but it's more annoying than anything else. What's also annoying is that after you beat the tar out of an enemy, he or she will go pick up some health and take the lead in the final few seconds of the match. In fact, on the default settings you rarely have time to actually knock out all your opponents, and instead you just have to hope that you have the most health remaining when the clock runs out. Thankfully there is an option to turn off the items and increase the round timer. However, if you set the round time to infinite, you can expect to have matches last several minutes, which isn't a good thing when the fighting is as tedious as it is here. If you can manage to avoid getting cornered and ganged up on, it's fairly easy to beat the game on the default difficulty setting. You can max out the difficulty setting, but rather than getting better, the enemies just get three times as much health as normal, which makes for a longer, even more tiresome match.

In addition to story and arcade mode, there are a variety of ancillary modes in Dust Strikers. You can play the game with up to three other players, provided that each player has his or her own copy of the game. In challenge mode, you can set up an arena and play against computer opponents until someone decides to jump in and play, just as it works in an arcade. This mode keeps track of your wins and losses and assigns you a ranking based on your record. Challenge mode is for human players only, so if you only have one friend to play against, you'll simply be playing a two-character battle. The other multiplayer mode is versus mode, which again is for up to four players. The difference is that versus fights always have four characters, with AI-controlled opponents filling in the spaces when there are fewer than four live opponents. The multiplayer battles are lag-free and move just as fast as the single-player battles.

In keeping with DS standards, Dust Strikers features a selection of touch-screen minigames that have nothing to do with fighting. There are seven games in all, and most of them are terrible. You can play a game of nine-ball billiards with Venom, but the aiming is imprecise and the ball physics are broken. You can tap and rub the screen to clean off Bridget's yo-yo as quickly as possible, play a whack-a-mole game with Faust, cut bushels of hay as they fall from above, and guide dolphins through hoops. None of the games offer anything fun or original, and you can finish all of them within about 10 minutes. Your rewards for getting high scores on the minigames are unlockable move sets that you can assign to Robo-Ky to create a custom fighter. It's a great concept, but it's hardly worth playing a bunch of lame minigames for.

Part of what makes the original Guilty Gear games so great is that sense of controlled chaos derived from the bizarre characters and exaggerated moves. Dust Strikers removes that sense of control that gave the original games their depth and challenge and kept people coming back for more. Instead, Dust Strikers just throws together some components that have worked in other games, and hopes for the best. The result is a game that lacks the focus, depth, and challenge to be a competent 2D fighter. 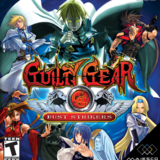