It doesn't take long to get over the novelty of the included steering wheel, and beyond that this is a very unremarkable racing game that isn't much fun.

It slices, it shoots, it...drives a car? That's right, the Wii Remote can add serving as a steering wheel to its list of uses thanks in part to Ubisoft's racing game GT Pro Series. The concept of using the remote to steer a vehicle is used in other games--and will no doubt be used by many others many more times to come--but what makes GT Pro Series unique is that it takes the concept a step further and turns the Wii Remote into a wheel. Specifically, the game comes packaged with a small plastic steering wheel that has a slot that you can fit the Wii Remote into and then use as you would any other steering wheel to control your onscreen vehicle. It's a novel idea that's fun for a few minutes, but the enjoyment quickly fades, and you're left with an ugly, unexciting racing game.

GT Pro Series is a road racing game featuring real-world vehicles from Japanese manufacturers such as Honda, Subaru, Toyota, and Nissan. It's a very straightforward game of racing on some very generic tracks with broad corners to encourage drifting. It's all very bare-bones stuff that has appeared in countless other racing games. The only interesting element of GT Pro Series is the way you control the car. You hold the Wii Remote so the buttons are facing you, and then you tilt it left and right to steer your car. The included steering wheel casing for the Wii Remote makes it so that you have an actual wheel that you can turn, rather than just tilting the remote. The way the remote is positioned in the wheel, it's easy to reach the 1 and 2 buttons to use your brake and gas, respectively.

The wheel makes it easier to manipulate the remote, but the control isn't very responsive. You have to turn the wheel a full 90 degrees on most corners, and since the game relies a lot on drifting, you usually need to quickly turn the wheel in the opposite direction to right yourself when you're coming out of a turn. This results in a lot of exaggerated back-and-forth turning movements that just aren't much fun after the first lap of a race. It also doesn't help that there's no resistance or feedback, and the whole setup is fairly lightweight. So even though it's fairly easy to control your car, it doesn't ever feel like there's a strong connection between the wheel and the car. There's also a bit of lag in the controls, which is a good thing, because if the remote picked up every little twitch, your car would probably be all over the place. At the same time, this means that the game won't read quick reactions, so if you're trying to avoid an opponent or correct yourself before smashing into a wall, you'll have to start steering much further in advance than you're probably used to.

GT Pro Series compensates for the somewhat loose controls by emphasizing drift cornering typical of arcade-style racing games, rather than the precise, technical style of racing you'd find in a simulation. It's easy to simply tap the brake going into a corner, then turn the wheel and hit the gas to initiate a powerslide that will take you through a turn without diminishing your speed. It can be a bit tricky to control a drift and to know when to steer out of it, but the game is forgiving enough that you should be able to get the hang of it in just a few minutes. Even so, the turn-gas-slide routine gets old quickly, and there isn't much challenge to whipping your car around turns. In fact, aside from when you need to initiate a drift, you can get away without ever touching your brakes in most races.

That isn't to say the races don't get challenging. At first, the computer-controlled opponents are easy to beat, and you probably won't have a hard time taking the gold cup in your first dozen or so race events. Eventually the artificial intelligence does put up more of a fight, but it still feels mechanical. You'll never see opponents leave their lines unless you bump them off course, and as you progress in the game, your opponents will start driving faster, until eventually you have to run a perfect race if you hope to take first place. It also doesn't help that you always start out dead last no matter how you did in the previous race, which means that you'll spend the first half of a lap wading through a mob of 11 other racers until you get in position to make a move on the leader.

GT Pro Series includes the standard race modes like versus, time trial, quick race, and career mode. The career mode includes four circuits, although each one is locked until you complete the previous one. There are several race events in each circuit, with a total of 36 different events in the game. Each event is a series of three races and usually has specific requirements on what type of car you can race. There are events focused on a specific model or type of car, as well as general championship events that let you enter with any vehicle. For each race in an event, you have to place third or better to move on to the next race. Depending on how you place in each race, you're awarded a certain number of points, and the driver with the most points at the end of the three-race event is the winner. By completing events, you'll unlock new cars and tuning options.

There are more than 80 different real-world cars in the game, including familiar models like the Subaru Impreza, Nissan Skyline, Honda Civic, and Toyota Supra. All of the cars have a cel-shaded look, so they aren't as shiny, detailed, or authentic as the vehicle models you'll find in most other contemporary racing games. There's also no damage modeling, so you can smash into walls all day long, but you'd never know it just by looking at your car. Each car handles differently, but none of them handle very realistically. Even the most underpowered or ordinary cars in the game easily drift around corners as if they were high-performance racing machines. You can tune the cars, but your options are limited. As you complete racing events, you'll unlock tuning options like new brakes, exhaust systems, and engines. There are also upgrades in somewhat unusual categories, such as seats, horn, and headlights. There are only a few options in each category, and tweaking them won't make much of a difference, if any, in how your car handles.

In addition to the championship race mode, there's "drift combo" mode. In this mode you have to try to rack up as many consecutive drifts as possible. There are three special tracks that are designed so that you can feasibly hold a drift the entire time, just sliding back and forth from one turn to another. It could have been an interesting mode if the driving were fun, but as it is, the drift combo mode gets stale quickly. Other than championship mode and drift combo mode, you can race against up to three of your friends in split-screen races in versus mode. However, bear in mind that there's only one wheel included with the package, so your friends will have to supply their own or simply go without.

There are 10 regular courses in the game, but you can race each one in reverse as well. The courses are as generic as they come, with names like "green field," "urban circle," "downtown street," and "heights mountain." The courses have no more character than their names, and after you've been racing for a while, all the tracks seem to blend together. None of them look impressive at all and exhibit bland backgrounds, minimal detail, and downright ugly roadside visual touches like flat, lime-green grass, blurry, jagged barriers, and blocky, undefined structures. It all looks ugly, and the day and night settings and laughable weather effects do nothing to enhance the atmosphere.

The visual presentation in GT Pro Series looks like something from the Nintendo 64 era, and the sound isn't any better. There's some cheesy electronica music that loops in the background and sounds really bad, not only because of the quality of the music, but also because of the poor quality of the recording. The sound effects are equally distorted and lacking. The cars all whine pathetically and don't sound anything like they should, and the sound effects, such as the muted crunch that you'll hear when you hit something and the digitized screech of tires on asphalt, are awful as well.

GT Pro Series makes sense in concept, but in practice it feels like an incredibly generic, cheaply made, stripped-down racing game that has been saddled with a gimmicky control scheme. Once the initial novelty of using the steering wheel subsides, there's nothing much left here to keep you playing. You can play through most of the game's events in six hours or so, and beyond that, all that's left is split-screen multiplayer, which is difficult to get excited about in light of all the issues with the game. So if you're looking for a racing game for the Wii, there are other launch titles that use the same control mechanic with better results. The steering wheel included with this game may be nice, but it's difficult to justify paying full price just to get that piece of plastic. 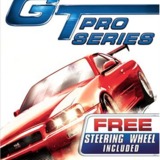 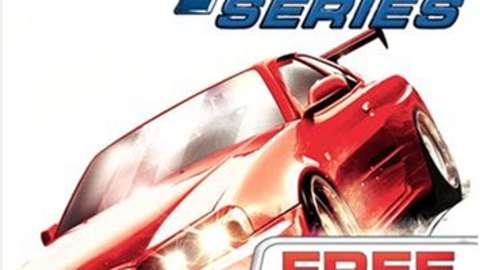