GT Advance 3: Pro Concept Racing is a spicier version of the original GT Advance that was released when the Game Boy Advance launched in June 2001.

The first two GT Advance games are widely regarded as the best racing games available for the Game Boy Advance, and THQ is hoping that lightning will strike a third time with its latest sequel, GT Advance 3: Pro Concept Racing. If you're familiar with the two previous releases, you'll recall that the first game, GT Advance: Championship Racing, was a realistic racer done in the style of the Gran Turismo series, while the second game, GT Advance 2: Rally Racing, took the action into the dirt and snow for a bit of off-road racing. Conceptually, GT Advance 3 is a combination of the two. The courses are paved and the vehicles are all city models, but car handling is slipperier than it was in the first GT Advance--meaning that lengthy drifts and fishtail slides are now integral to successful race strategy.

One of the game's nicer aspects is its car selection. In all, there are 97 cars in the game, hailing from manufacturers such as Honda, Mazda, Mitsubishi, Nissan, Subaru, and Toyota. To start with, your initial garage contains only a dozen or so vehicles, but you'll earn an additional car for each first-place finish you achieve. The game also includes a tuning menu that allows you to install performance upgrades, which you can earn for first- and second-place finishes in specific races. Upgrade options include engine, muffler, suspension, limited-slip differential, air filter, seats, CPU, and weight reduction--each influencing overall handling, speed, and acceleration to varying degrees.

The courses in GT Advance 3 are lengthier than those in GT Advance, and they're also much better at challenging your driving skills. U-turns, S-curves, and combination hairpins are more common, and you'll participate in a fair number of nighttime and rainy-day races as well. In all, there are 40 tracks, which you'll unlock by completing races in the five classes of the championship mode. A new feature of GT Advance 3 is its license tests. Before you begin a set of races in the championship mode, you have to successfully complete three test situations in order to qualify for that particular racing class.

Additional play modes include time attack, quick race, practice, link play, and a rather unique diversion called drift combo mode. In drift combo mode, your goal is to perform as many fishtail slides in succession as possible. Once you complete all five classes of the championship mode, you'll also unlock a kart-racing mode. More importantly, GT Advance 3 includes a battery save feature to record your progress--in contrast to the terrible password-based system that was used in the original GT Advance.

The visuals and audio in GT Advance 3 are no better or worse than they were in the previous games. Cars are drawn using numerous sprite frames, which gives the illusion of 3D vehicles without monopolizing the GBA's horsepower. The courses are flat but have enough detail in the way of signs, trees, and rocks to at least appear lifelike. M2TO, the game's developer, improved the overall look of the game a little bit by adding some texture to the road surfaces and by yanking the camera perspective back slightly in order to provide a less claustrophobic view of the road. As for the audio, each car has its own unique engine, and there are different sound effects used for skids on pavement, gravel, or grass. The audio won't blow you away, but it's adequate for this kind of game.

Overall, GT Advance 3: Pro Concept Racing is a spicier version of the original GT Advance that was released when the Game Boy Advance launched in June 2001. The inclusion of a battery save feature makes this game infinitely more enjoyable, however, and the twofold increase in car selection isn't too shabby either. 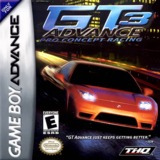