Grooverider: Slot Car Thunder is the very definition of a stripped-down budget title, as practically every aspect that would make a game fun or interesting is missing.

Though slot car racing was once a popular hobby, its relevance has all but disappeared in this day and age. Sure, occasional businesses can be found that still cater to the slot car audience, but the level of popularity once achieved by slot car racing has sunk well below the general population's collective radar. Still, there are those who continue to cling to slot cars as a diehard hobby; and this is where Grooverider: Slot Car Thunder comes into the picture. Slot Car Thunder is actually one of the few games to try to re-create slot car racing into video game form, and it does so at a budget price tag. You'll find a number of different game modes available in Slot Car Thunder, as well as more than 20 different types of cars and tracks. What you won't find, however, is much in the way of fun or production value.

Slot Car Thunder features a few different single- and multiplayer modes, including arcade, time trial, championship, and special. Championship is the meat of the single-player mode, and playing through it is the only way to unlock new cars and courses. Additionally, taking first place in certain races will allow you to unlock special games, which include such offerings as cop challenge, mine madness, and GT sports. Unfortunately, while there is a nice variety of races in the game, and some of the special games are conceptually amusing, the problematic gameplay prevents any possibility of fun in any of the game's modes.

Slot Car Thunder is just about as pick-up-and-play as any game you'll ever find. To control your car, you simply press forward to accelerate, use the right and left triggers to change lanes on the track, and press the A button to enact generic power-ups, such as laser bursts, shields, and speed boosts. The in-game action isn't much more complex either. In any given race, you'll be up against three other opponents. You basically try to navigate the various obstacles in each course (like barriers, for instance) that can pop up or go down via switches, negotiate rough curves that can send your car flying off the track, and avoid gaps in the track. These hindrances are pretty easy to figure out once you've played each track a few times. The biggest challenge you'll face in Slot Car Thunder comes from its own sloppy gameplay design.

The speed at which you can safely go around corners seems to change at random. On some passes you'll be able to whip around a corner at full speed, while, one lap later, the same turn will send you flying off the track. Periodically, after crashing off the track, you will respawn in the most inopportune place on the track, leading to a lengthy loop of crash after crash until the game decides to spawn you elsewhere. On top of all of that, the placing icons that appear above an opposing car, letting you know who is in what place, obscure so much of the screen that you can't see oncoming obstacles. Ultimately, these irritating quirks make the game far more frustrating than fun to play.

While budget games are rarely ever renowned for their presentational aspects, Slot Car Thunder is especially unimpressive. The game's graphics can easily be compared to a marginally cleaned-up PlayStation game, with some pretty bargain-basement-looking track designs and an erratic frame rate that becomes noticeably unpleasant during multiplayer. The range of different cars in the game is decent enough and includes classic British autos, stock cars, and even '70s cop-show-themed cars. However, there's really only one type of car for each, with just a slightly different paint job and a couple of other minor aspects tweaked. The game's sound is equally lacking. While playing, you'll only hear some tinny-sounding engine noises, along with occasional crashes and tire screeches. Some faint, repetitive techno music plays in the background as well, but it's all so generic and dull that you'll probably forget it's even there.

Grooverider: Slot Car Thunder is the very definition of a stripped-down budget title, as practically every aspect that would make a game fun or interesting is missing. If you're a slot car enthusiast who's dying for a chance to take your hobby to a console system, or even if you're just a fan of cart racing titles and are searching for something a bit different, don't bother with Slot Car Thunder. The game does little justice to slot cars or racing games in general, and it just isn't worth your time. 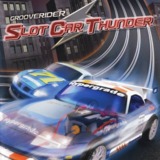 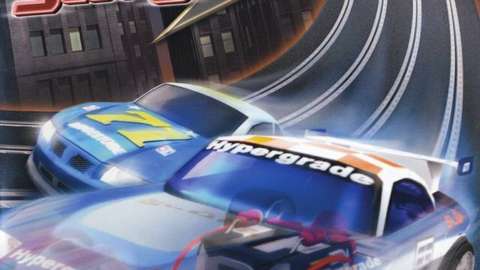 With 20 tracks in 5 environments, this game sets out to capture the nostalgia and excitement of slot car racing, and includes 20 different cars varying in style from 1920s British race cars to American stock cars and Indy-style cars.