GripShift's unique qualities are undermined by one severe flaw: Driving in the game isn't much fun.

Developer Sidhe Entertainment's GripShift is not so much a driving game as it is a puzzle game that happens to use cars as its focal point. It's got far more in common mechanically with something like the PC cult favorite TrackMania than any brand of racer, arcade or otherwise. Unfortunately, GripShift's unique qualities are undermined by one severe flaw: Driving in the game isn't much fun. Even though you're not racing, you still have to drive a vehicle around the game's plentiful number of tracks (or puzzles, or whatever you want to call them), and the controls for doing so are so frustratingly unwieldy that it renders the entire process an infuriating chore. It's too bad, really, as the concept of a platform-heavy puzzler that features crazy cars sounds like a neat idea. GripShift just doesn't deliver on its lofty concept.

You begin GripShift by picking from one of a few goofily designed racers (which all look like Saturday morning cartoon versions of obnoxious club kids) and then one of the four initially unlocked vehicles. Racers don't have any specific stats, but cars do, and you'll want to find one with particularly good handling for the early goings. You'll be indoctrinated into the game's challenge mode by a series of beginner-level courses that give you a pretty good overview of what to expect throughout the rest of the experience. Essentially, every track in the game is some kind of a hovering, twist-and-loop-filled monstrosity that's filled with crazy platforms, shortcuts, jumps, teleporters, and so on. As you play through each track, you'll have a couple of objectives to complete. They rarely go beyond the scope of completing the track in a set amount of time, collecting a series of stars scattered about the place, or just hitting all the set checkpoints. Though you can progress to the next track simply by finishing the course before time runs out, you can't unlock the next difficulty level and series of courses unless you collect a certain number of credits. And you can't earn credits unless you finish these objectives. Right. Easier said than done.

Again, you can complete any course simply by hitting the finish line before it's over, but you need the objectives to earn credit, and it's pretty much a physical impossibility to complete more than one objective per try on most courses. To the developer's credit, part of this is because the puzzles are fairly cleverly designed, requiring some strategy on your part to get to where you need to go in the right amount of time. Unfortunately, this quickly degenerates into terribly frustrating trial and error thanks to the driving mechanics. No matter what car you're driving, and no matter how good the handling rating might be, you will spend more time trying to keep a solid grip on your car and its wheels on the track than you will spend actually thinking about any of the game's puzzles. Every car slips and slides around the roads like a greased pig. This represents double trouble, because none of the tracks have side rails of any kind.

So, essentially what you get is a lot of you desperately trying to keep your car on the track at all times. You have to be extra-careful in leading your turns, and any time you have to perform a big jump or something similarly grandiose, be prepared to do it over and over again until you figure out the timing. We understand the developer wasn't trying to make realistic car physics here. But in this case, what you have doesn't even feel like a vehicle we've ever seen--in real life or in a game. You can brake and accelerate in midair, for one thing, plus there's the aforementioned slip and sliding. It will take you a good long time of playing GripShift to get any sort of regular handle on the cars, and even then you'll feel like you're gripping the PSP for dear life as you take every turn and jump. That's not fun. That's a rage-induced aneurysm waiting to happen.

It's even worse during the races. The game does have a standard race mode, and races pop up during the challenges as well. The racing here is pretty close to the kind of kart racing we've all grown to know and love over the years, with random weapon pickups (like missiles, shields, and TNT bombs) and plenty of nitro boosts. But again, the handling pretty much sucks the fun out of all of it, and the races are made even more angering by the fact that you're not only having a hell of a time staying on the track, but also you're getting missiles constantly launched at your ass on a semifrequent basis.

What makes this problem so exasperating is that Sidhe included a metric ton of content for this package, all of which looks great on paper. Between the challenge mode, the races, and some of the bonus minigames, there are about 100 different tracks here. But again, their value is mostly negated by the fact that the control mechanics are so flawed. The minigames are really the only competitions to skate by unabated by these problems, since they don't rely too heavily on tight control. There are a lot of goofy games here, like penguin bowling, where you launch yourself at 10 penguins that are standing there like bowling pins, and playground, where you're given a kooky arena track and are instructed to just go wild collecting items and boosting around like a nut. Sadly, these minigames are merely a fraction of the overall package, so you'll spend far more time enduring the irritating races and puzzles.

There's also ad hoc multiplayer for up to four players--provided you can get the people together--and, of all things, a fairly in-depth track editor. Apart from multiplayer races, you can also engage in a combat-oriented deathmatch that isn't half bad, as well as a tag-inspired game where everybody competes to be "it." The best thing, though, is that you can use the game's track editor to upload your own created tracks to friends so you can race against them. The editor itself might be a bit taxing to use at first, as it actually offers quite a bit of depth, but after some time playing around with it, you ought to find it pretty rewarding.

Graphically, GripShift employs a pretty-looking engine. Everything moves at a solid 30 frames per second, with no slowdown apparent, and the basic track environments, while not wildly varied, have a neat look to them. The car models and drivers are similarly well rendered and detailed, though aesthetically they're not anything special. In fact, the game's art style is pretty generic as a whole, and while you can certainly laud its technical merits, you won't find much worth getting excited about otherwise. The audio in the game consists of some highly repetitive musical tracks by hip-hop artists you've never heard of, some squealing tires and other predictable sound effects, and a whole lot of your driver shrieking as he or she plummets to his or her death.

For as bad as the driving mechanics in GripShift are, big-time puzzle fans and those who really enjoy the notion of a track editor will at least get something out of the game. You'll never fully get used to the way the cars move, but the breadth of content is undeniable, and the game doesn't look half bad to boot. Serious puzzle fans in search of something different might find a decent rental in GripShift. Less-hardcore puzzlers, however, should probably just stick to their copies of Lumines for the time being. 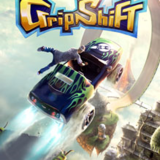 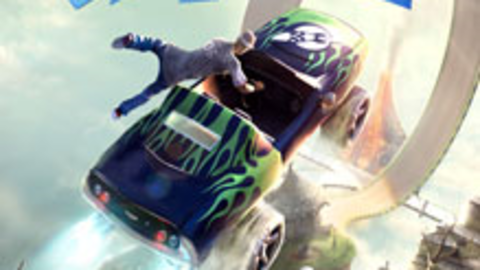 GripShift is a driving game that combines racing, stunts, and puzzles and features more than 100 maps.