GrimGrimoire is a creative, one-of-a-kind game that's a lot of fun to play.

What is a grimoire, and how did it get so grim? It's a good question, but there are far more important reasons for you to pick up a copy of GrimGrimoire than just to find out the answer. Instead, play it because it's a colorful, original strategy title with a big heart and compelling gameplay. It's also an arresting display of painstaking artistry, overflowing with imposing mythical creatures and amusing unit designs. It's not every day that a game this unique comes along, and while it's got its share of minor flaws, it's a delight to play and hard to forget.

GrimGrimoire's story is one of many strengths, though you'll first be inclined to dismiss it as a Harry Potter knockoff. After all, you play as a new student in a famous school of magic that protects the philosopher's stone--and is presided over by white-bearded professor Gammel Dore. Sound familiar? Well, obvious Rowling references aside, the similarities are completely superficial. Sweet-natured student Lillet Blan finds herself in the midst of a confusing magical melodrama that comes into focus only because she relives the same five days over and over again, Groundhog Day style. Each pass-through clarifies dozens of questions as you slowly unravel the weird, wonderful tapestry that ties together an odd and charming collection of misfits and miscreants. The setup is terrific, but the payoff is the cast of larger-than-life characters. A snarky devil, a wandering ghost, an earthbound angel--they've all got something to hide, and the web of lies that they weave would make even a politician blush. The dialogue is clever and accompanied by gorgeous 2D character portraits presented in traditional Japanese RPG style.

But make no mistake: This is no role-playing game. GrimGrimoire is real-time strategy, and like in most strategy games, you've got to collect resources, churn out some units, and attack the bad guy. That's where grimoires come in. Grimoires are spell books, and learning their contents lets you place runes on the battlefield. They come in four flavors: necromancy, sorcery, glamour, and alchemy. Each discipline contains three grimoires, giving you a total of 12 runes to summon. Runes are comparable to your everyday RTS structure, and placing one lets you create a number of different kinds of units. They also grant you the rough equivalent of a tech tree, so each one can be leveled up, and in turn can produce stronger, more effective units. So as in most strategy games, you create a bunch of workers--in this case, elves, imps, and other cutesy creatures--and send them off to collect resources. Here, it means gathering mana from the various crystals on the map. Then you place your runes, build your combat units, and set out for map control.

While GrimGrimoire does an outstanding job of transporting PC-centric strategy mechanics to the PlayStation 2, it's the differences that make it legitimately great. For starters, you don't view your map from overhead. Instead, each mission is a castle cross-section that at first glance makes it look like a side-scrolling platformer. Every map is an amalgam of hallways and stairwells that most units must traverse to get from one point to another. While each one looks much the same as the last, the placement of various features like mana crystals and barriers make each map functionally different. Thus you need to take into account the path your units must take to their destinations, which may involve climbing stairways and crossing enemy territory. Top-level units like chimeras cross the map without such concerns, but come with their own sets of needs and strategies.

While the first few hours will lead you to believe that success is only a matter of building a bunch of mythical creatures and rushing the artificial intelligence, unlocking new grimoire pages and runes proves that's anything but the case. Units like fairies and demons have fairly standard melee or ranged attacks, but as you level up and summon new familiars, the intricacies become noticeable and fairly complex. It's tempting to build a powerful unit like a dragon and send him out to do massive damage, but even a dragon has its counters, and the rock-paper-scissors relationship between unit types ensures that you react to your enemy and build a well-rounded army. Support units are an absolute must in these cases, and can turn a battle topsy-turvy in a matter of seconds. A chimera is a powerful and awe-inspiring aggressor, but astral units are impervious to his rotating claws. On the other hand, a homunculus can make astral units turn physical for a short period, which lets the chimera make toast of your ghosts. Because you're rarely limited to a single discipline, you've got access to any rune at any time, and it makes for a smorgasbord of support possibilities and attack options.

All of these detailed unit interactions require a good amount of babysitting, but while that's a chore in most RTSes, it's an absolute pleasure in GrimGrimoire. A lot of that has to do with how varied unit mechanics are. You don't just summon a dragon--you summon its egg, and then must incubate it before it hatches. A morning star must be equipped with ammo to attack, but can hold only five charges before you must return and reload. A grimalkin can put an enemy to sleep, but you must command it to cast the spell, or it's demon fodder. All of this requires you to move around the map, issuing commands and keeping your units in check, but it makes for a wild and crazy time. This would create a big mess in a standard RTS, but here, the maps are small and your high-level units take up half the screen, so it's never unmanageable.

A few other elements help make battles easy to handle, such as how the game pauses when you select any unit, and the handy pull-up map that lets you quickly jump to any spot on the battlefield. On the other hand, there are times when it's tough to find units or group them in meaningful ways. Welcome features would include a rally point feature to get your worker units automatically gathering once summoned, and a quick way to locate a particular unit. There are plenty of times where a small area will get cluttered with units, and while you can cycle through available ones with the D pad, it's tough to choose the exact one you want on the fly. These are small nitpicks, but they may throw players of traditional strategy games for a loop. Yet it's all part and parcel of the game's warm embracing of micromanagement, and while it sounds peculiar at first, it's great fun in practice.

GrimGrimoire is absolutely dripping with visual class. It's not a technical powerhouse, so the sprite-based units and 2D backgrounds won't push the limits of your PS2 hardware. But it doesn't matter, because it's often stunning to watch in action. The frightening majesty of a dragon slowly crossing the map is a breathtaking sight, yet it's the tiny details that make the visuals sing. Character portraits in cutscenes pulse when they breathe, blobs goopily bounce from crystals to runes, and it all exudes a sweet, vibrant charm that's hard to resist. The appeal doesn't transfer evenly to the sound design, but the soundtrack is cute and quirky, and spells and attacks sound great. The acting and unit voice-overs are hit and miss, but rather than grate over time, they grow on you.

It'll take you a couple dozen hours to finish up the story, but you can return to any map you want once the mission is complete--and you'll definitely want to. You can't beat a screen crawling with unicorns, golems, and demons, and the difficulty ramps up nicely as the game progresses from a walk in the park to a flurry of insanity. GrimGrimoire is a fun and terrific gem waiting to be discovered. It may not be the most fully featured strategy game, but it's brimming with magical wonder and is easily recommendable. 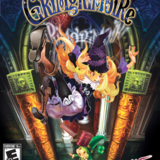 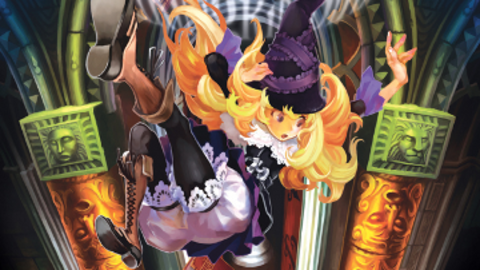 When a young magician is admitted to a prestigious magic school, she finds that her memories hold the keys to saving her fellow students, if she can only solve the mystery and prevent tragedy.