Grid Runner is a hectic, 3-D tag-capture-the-flag game that takes players on a relentless, nail-biting ride.

Featuring rocket-quick, competitive or single-player gameplay, Virgin Interactive's Grid Runner is a hectic, 3-D tag-capture-the-flag game that takes players on a relentless, nail-biting ride. Like Nintendo's BomberMan series, Grid Runner gets back to the basics of what makes a game fun.

The object of the Grid Runner is simple: Players speed through a top-down perspective maze to claim a certain number flags before their opponent snags them. This game would be little more than a glorified Pac-Man were it not that players can only claim flags if they already possess the first flag. This means the player without the flag has to track down his opponent and tag him before continuing the flag-snatching quest. An onscreen arrow points in the direction of whichever player has the flag-capturing power, so there's never any question of where the competition is. The various computer-based cretins you're pitted against get uglier - and more cunning - with each interplanetary level.

To really foil an adversary in Grid Runner, however, players have to master the art of evasion - and attack. Each course is chock-full of teleports and launchers that propel runners from one end of the maze to the other. These make for great escape hatches in panic situations. But when it's just not possible to run away, players must instead turn to the offensive magical abilities at their disposal. Blasting opponents with fireballs to slow them down, or deploying mines to temporarily disable them are par for the course. It's also possible to lay down electric "bridges" that lead to flags otherwise unreachable. During each level players can claim color-coded power-ups that increase speed, agility, or magic. It's also possible to pick these up in intermediate bonus levels, incrementally augmenting the character's general power throughout the rest of the game.

Graphically speaking, Grid Runner represents a considerable leap from the 2-D rendered BomberMan, and the 3-D mazes and animations evoke memories of long nights spent kicking bombs in front of the SNES. In terms of play, there's nothing terribly innovative here. In fact, people who were hooked on the cute dementia of BomberMan might not find everything they're looking for in this game. But don't be mistaken, Grid Runner is an addictive dash around the Playstation. 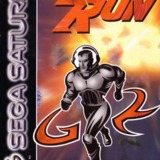