Last year, The Beatles: Rock Band demonstrated how a rhythm game dedicated to the songs of one band can create a uniquely immersive and enjoyable plastic rock experience. Green Day: Rock Band follows in those footsteps, and while it doesn't rise to the same lofty heights as its predecessor, it is still a solidly entertaining package. There's a good amount of music, including three full albums, though your affinity for the Bay Area band's work will likely be the determining factor in whether or not you think the game is worth full retail price. The unlockable photos and videos are a nice touch, but Green Day: Rock Band lacks the artistic ingenuity to broaden its appeal much beyond its established fan base. Still, there is some high-energy entertainment to be had here, and interested parties won't be disappointed.

The 47-song tracklist includes three full albums (Dookie, American Idiot, 21st Century Breakdown), as well as a few selections from Warning, Nimrod, and Insomniac. The game also incorporates the six downloadable Green Day songs available for the original Rock Band and Rock Band 2, provided you shell out the funds to download them. The youthful energy of Dookie contrasts nicely with the more melodic 21st Century Breakdown, and though the drum parts in many songs feel a bit too familiar, there is a substantial degree of musical diversity.

Unfortunately, the presentation doesn't do much to highlight that diversity. There are only three venues to play in, and the band members wear only three different outfits (and hairstyles/colors). Career mode is centered around these venues, and as you progress, you unlock new setlists and new songs to play (though all are available from the get-go in Quickplay). There are no music videos to accompany each song and differentiate among them, only a live performance scene featuring avatars that, while recognizable, fail to capture the band's dynamic energy. While the unique videos in The Beatles: Rock Band helped create a sense of progression and novelty from song to song, the forgettable visuals in Green Day: Rock Band practically beg to be ignored. More venues and some of the artistic variety shown in the band's videos would have made this a more unique experience; as is, it feels more like a track pack.

Of course, Rock Band has always been about the experience of playing, not watching, and Green Day: Rock Band is a lot of fun to play. There is a good range of difficulty, ensuring that rockers of all skill levels will have something to enjoy. Each instrument has a number of standout songs, and the three-part vocal harmonies pioneered by The Beatles: Rock Band are on full display here. It's still great fun to chime in on vocals, especially while playing an instrument, making a mic stand an increasingly valuable part of any living room rocker's gear. Venue repetition aside, the setlist format works fine for Career mode, and the unlockable challenges repackage songs in different ways, providing a refreshing change of pace.

You can also unlock pictures and videos from throughout the band's career that include amusing behind-the-scenes profiles and electrifying performance recordings. You can play Quickplay, Career, and Score Duel (a competition against an opponent playing the same song and instrument) either locally or online, and you can export all the songs on the disc to your hard drive using the code on the game manual and 800 Microsoft points/$9.99. As far as value goes, 47 songs for full retail price isn't a great one, but there is more than enough music here to keep Green Day fans rockin' into the wee hours. It goes without saying that Green Day haters should stay away, but those on the fence will find that there is plenty of fun to be had with this solid new entry in the Rock Band lineup. 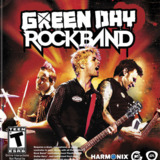