Grand Slam Tennis 2 comes to the sports gaming sphere when fans of the sport already have two other options: Top Spin 4 and Virtua Tennis 4. To stand out from its competition, it's coming onto the court as the only game with all four Grand Slam venues and a deep roster of legendary players, featuring names that people from all walks of life should recognize. While these two elements are good, a weak career mode and a lack of additional courts cause Grand Slam Tennis 2 to land in the middle of the tennis gaming landscape.

For starters, Grand Slam Tennis 2 is extremely user-friendly thanks in part to two different control options. EA Sports games have never been afraid of letting you use the right analog stick to control things. Here, it's used for swing mechanics. Flicking the stick in a different direction will result in a different kind of shot. The stick is used for all aspects on the court, including serving, and it works well in all regards. But for those who want simple button presses to dictate shots, that option is also available and can be grasped in no time.

PlayStation 3 owners have the additional benefit of the Move controller, and as you'd expect, it works fairly well. There are some minor delay responses, specifically when you're required to bring your hand down to initiate a serve, but otherwise, no real problems exist. On top of that, if you have a navigation controller, or want to hold a Sixaxis in the other hand, you can use it to control your player instead of your player being moved automatically.

Grand Slam Tennis 2 also takes a different approach to serving. While other tennis games have you pay attention to the height of the ball or a meter to maximize speed, here you have a bell curve that determines power. Before initiating the serve, holding the serve of choice for a period of time dictates how much power you want. Based on your serving skill, a sweet-spot marker appears on the court. Once it's set, a bar moves and your goal is to stop the moving line at the peak of the bell curve to get the strongest shot possible. It isn't necessary to hit that sweet spot to have a successful shot, but the closer the line is to the peak, the more likely it is that the serve will result in an ace.

One of the highlights of Top Spin 4 is its fantastic and deep career mode, which includes a plethora of tournaments and game types to take part in, not to mention that your created character earns experience regardless of the mode being played. Grand Slam Tennis 2's career mode entices you by giving you the opportunity to play at all four Grand Slam venues. While other tennis games have included three of the four, Grand Slam Tennis 2 is the only one that also includes the famed All England Club in Wimbledon.

While the inclusion of all four Grand Slams is nice, it's the only real highlight of the mode. Each year spent in the 10-year career is broken up into quarters for each Grand Slam. Before each one, you have the option to take part in up to two different activities, such as entering minor tournaments. Alternatively, you can try to complete training exercises while famed tennis player John McEnroe yells at you, or take part in exhibition matches that unlock additional gear and attributes.

There are a few problems with the career mode. The first is that it's limited. On top of the fact that there are only a few match types, there are only four major and four minor events available. This means that once the year is done, you may have seen everything the mode has to offer. The other problem is the way the difficulty increases. Rather than restricting what you can do based on your player's rating or career ranking, the game's difficulty increases as you progress from year to year. The first year you play on the game's easiest difficulty, rookie; year two moves you up to amateur; year three takes you to professional; and then years four until the end are played at the superstar level.

This progression in difficulty is hardly ideal. This system makes your first year so easy that even with a created character at a rating of around 35, you can easily beat the best players in the game, such as the highest-rated player, Novak Djokovic. Being able to win all four majors in your first year in real life should be impossible. But in Grand Slam Tennis 2, it's highly unlikely you won't accomplish this feat. In fact, winning all four majors in your second year is also highly likely.

Since you can more or less win eight majors in the first two years of your career--more than most real players have won--there are few reasons to keep playing. You might wish to keep pushing onwards if you long for a greater challenge: Once you move from amateur to pro, winning matches requires a lot of skill, not just a highly rated player. Nevertheless, had the difficulty been more related to your character's skill rating, then the career mode would have been more interesting.

Online play is also available and includes the ability to play in tournaments against others from around the world. Online connections are decent, but when you're playing with people overseas, there are some minor response delays; the ball stops mid air for a moment before the opposition makes its shot, and a few times, it got stuck on the net before the game signaled the stoppage of play. Your created players can also be used online, but because of their lower ratings, most people are playing with real pros instead.

Playing with the roster of real tennis players is available in the game’s ESPN Grand Slam Classics mode. Here, you can replay some of the most iconic Grand Slam matches from the last 30 years. Each match starts you off at a particular point--perhaps down two sets to one--and you must complete specific objectives. Completing the more recent matches unlocks older ones and the opportunity to play a few fantasy matches that have the best of today's players playing against the best from the past.

The roster of players is both incredible and lacking, depending on how you look at it. On the men's side, the roster of fifteen includes both current and former household names like Pete Sampras, Andy Roddick, Bjorn Borg, and Roger Federer. But on the women's side, there are only eight players included, four present and four classic. The roster of woman’s players does include famous players like Martina Navratilova and both Williams sisters, but of the current roster, only one of them is currently ranked among the Women's Tennis Association's top 10.

Thankfully, though, the entire roster has been incredibly re-created to replicate how those particular players act on the court. Rafael Nadal's backswing is wild, Maria Sharapova's signature grunt is there, and even John McEnroe gets visibly upset when shots don't go his way. Although only eight events are included, each of the four majors features three different courts, and outside of the plain looking judges and fans in the stands, looks really good.

There is also commentary from former tennis greats John McEnroe and Pat Cash. Both know their stuff and are interesting, but they end up repeating themselves after a short while if you tend to play a particular type of tennis. Because other tennis games don't include commentary, the advantage goes to EA.

As a first effort on PlayStation 3 and Xbox 360, Grand Slam Tennis 2 is a fine introduction but could have used some more work. The virtual pros included have been implemented really well, and the varied control schemes are easy to learn. Unfortunately, the career mode lacks depth and fails to hold your interest for very long. Still, if EA Canada plans to make another tennis game in the next two to three years, as is the trend, there is potential for this franchise to have a long shelf life. 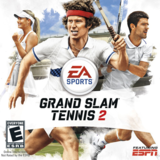