Grand Prix Legends will reward you with arguably the most intense racing experience ever seen on a personal computer.

How real is real enough - or, in the case of Grand Prix Legends, how real is too real?

Those are questions some gamers will be asking themselves after wrestling to complete a single lap - without spinning out or crashing, that is - on any of the eleven world-famous tracks featured in Grand Prix Legends, Papyrus' newest racing sim that's being rightly hailed as the most realistic simulation ever developed.

Grand Prix Legends is a nearly perfect re-creation of the 1967 Grand Prix season, with Watkins Glen, Monza, Spa-Francorchamps, Rouen-les-Essarts, Mosport, Silverstone, Kyalami, Zandvoort, Mexico City, Monte Carlo, and the mighty Nurburgring modeled in the sim; only Le Mans is missing, and only two teams (Cooper and Honda) are missing from that year.

In addition to five historically accurate cars - the Lotus-Ford 49, the Repco-Brabham BT24, the Eagle-Weslake T1G, the Ferrari 312, and the BRM H-16 - Papyrus has also included two fantasy cars, the Murasama and the Coventry (obviously meant to take the places of Honda and Cooper, respectively). And of course there are the drivers: Gurney, Clark, Hill, McLaren, and many others who literally put their lives on the line in pursuit of victory and to slake their thirst for raw power and speed.

It might sound like a tired cliche, but each of these cars really does have its own distinct characteristics, and if you don't believe me, then try driving the Murasama after you've gotten used to the Lotus or the Ferrari. They all, however, share a common trait: They're incredibly hard to drive. That shouldn't come as any big surprise; put a novice in a lightweight car with a 400-plus horsepower engine and no type of aerodynamic additions like spoilers or wings to provide down force, and it's only natural he'll find himself flipping, spinning, rolling, and generally doing everything except staying upright and heading around the track. Even after heading to the pits over and over again to tweak the almost innumerable settings for suspension, fuel, tires, and so on, you're likely to still find it hard to handle these beasts - at least if you want to keep up with the rest of the pack.

It's not as though Papyrus tried to pull the wool over anyone's eyes regarding the game's difficulty level and steep learning curve. On the second page of the manual - not to be confused with the nearly 100-page strategy guide bundled with the game, without which the learning curve might become vertical - you'll find this statement: "You will spin and crash because everyone who tries the simulation spins and crashes the first time out. And the second time out. And the third. People who have raced real cars spin and crash in the simulator - mainly because they aren't feeling the forces they are used to feeling while driving."

And it's that last little bit that leads me to my only serious complaint against an otherwise stunning achievement: Why didn't Papyrus attempt to ease the learning curve with a few realism toggles? These cars are incredibly difficult to drive when you are getting real-world feedback, and they become absolute bears when you don't have any input except what you see on a computer monitor and hear through some speakers.

How about a toggle for a traction meter that would give some idea of how close you are to spinning out? Or an option to put a "governor" on the top speed of the computer-controlled drivers so you could race with the physics model fully active and at least be competitive as you gradually mastered the sim? It's true that there are driving aids for shifting, throttle, and braking, but these are little more than crutches that slow you down more than teach you how to handle the toughest driving sim ever created. Instead, it'd be far better to have an option to make the opponents a little dumber and a little slower so you could first learn how to race and then work on speed. I know, I know - you can get your chops down in the game's training mode. But that doesn't change the fact that GPL might lure more people in if at least some of them could find a way to be competitive from the green flag.

And I really want more people to get into this sim, because once it casts its spell on you - even if that takes 10 or 15 hours - you're likely to be hooked for a long, long time to come. I know, because I was just about to throw up my hands and walk away when I actually finished in the top ten (in a field of 20) at Monza - and I felt so happy and proud that it was almost like an early Christmas present. Yes, Monza's one of the easiest tracks, and I had the race length set to novice. But that one little taste of success was enough to have me eager to climb back in the Lotus and set my sights on even tougher challenges.

What makes GPL even more entrancing is the wonderful graphical flourishes - the bystanders, the animated officials, accurate mirrors (mind blowing the first time you see them), and drivers shifting down and turning the wheel as they enter turns. The instant replay feature gets a near-perfect score, as do the outstanding artificial intelligence routines developed for the drivers. Tracks and background scenery are first-rate in 3D-accelerated mode (more on that later), but you won't fully appreciate how well they're done until you're able to sit back and watch the drama unfold on replay.

About the only quibble I have with gameplay is the limited number of views: Like Papyrus' previous IndyCar Racing and NASCAR Racing games, GPL has only two views (cockpit and chase) available during the race, but about ten during the replay. I'm certainly not going to race from the nose view, but I'd like to access the roll-bar view because it gives you greater viewing distance down the track (another potential way of balancing the hyperrealistic physics model). As it stands, the only way to access anything besides the two standard views is to edit the PLAYER.INI file - and if you hit F10 to access the chase view, then it wipes out the changes and sticks you back in the cockpit.

A lot of racing fans have raved about the game's multiplayer action even over the Internet, but Papyrus and Sierra have come up a little short of the mark by failing to provide even a rudimentary chat area where GPL owners can meet and arrange matches. There are a couple of web sites that provide such a feature, and of course you can always check out the #gpl channel on IRQ or head to Kali to look for opponents. But just as with the game's learning curve, these are things we veterans take for granted but which are likely to be off-putting for newbies or casual gamers.

Besides plenty of patience, you'll also need one other thing to fully enjoy GPL: a fairly high-end system with a good control setup. Papyrus recommends a 266MHz with 64MB RAM and a 3D card using either the 3dfx or Rendition chipset (strangely, there's no Direct3D support), but I suspect that you'll need a 300MHz to run at 800x600 in 16-bit color against a full field of opponents. As far as controllers go, the Microsoft Force Feedback Wheel worked like a charm even though the game doesn't have force-feedback support, but I also got nice results with a pedal/wheel combo as well.

Grand Prix Legends isn't for everyone, but that little adage is true of many of the finer things in life. Provided you've got enough computing muscle to run it smoothly and the patience to stay with it long past the first feelings of frustration, Grand Prix Legends will reward you with arguably the most intense racing experience ever seen on a personal computer. 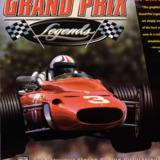