The Gradius series of space shooters has developed a reputation for being extremely difficult, and Gradius III justifies that notoriety. The game was originally released for the Super Nintendo Entertainment System in 1991 and is now available on the Wii Virtual Console for 800 points ($8). It's a good deal if you're looking to test your reflexes, and it will provide a steep challenge to even the most seasoned Gradius veterans. However, for the inexperienced player, Gradius III is a nearly impenetrable, often maddeningly difficult experience that's still entertaining in an almost masochistic way.

Gradius III is a side-scrolling shooter in which you pilot a small spacecraft known as the Vic Viper. It's up to you to make your way through 10 different levels (and a handful of hidden bonus levels) to defeat a menagerie of imposing alien bosses. Fortunately, the Vic Viper is well suited for the task, even if you aren't. Before the game begins, you can select which weapons you want to equip. You can choose missiles, double weapons, lasers, shields, special attacks, and options. The options are small balls of light that hover near your ship and mimic its firepower. Unlike in previous Gradius games, Gradius III lets you customize your weapons in edit mode if you don't find any of the preset loadouts to your liking. There's a good deal of strategy involved in choosing your weapons, and you'll often find yourself at a significant advantage or disadvantage in certain stages based on your weapons. There's also a bit of strategy involved in activating your weapons. As you play the game, you'll collect power pods, and depending on how many you've collected, a power-up will be highlighted on a bar at the bottom of the screen. By choosing which power-ups to activate and in which order, you can transform the Vic Viper from an incredibly slow peashooter into a nimble powerhouse that can effortlessly clear entire screens full of enemies.

The difficulty in Gradius III comes from the fact that unless you have a shield activated, it only takes a single stray projectile or contact with an object to kill you. You will have to contend with often dozens of enemies, bullets, and lasers, and they come from every direction. There are times when you're forced to navigate narrow pathways while defeating streams of enemies or trying to evade fire and collect power pods all at the same time. If you take your eyes off your ship for even a moment, you'll often end up getting killed by a hazard that you didn't even see coming. And if you manage to survive a stage, you have to defeat a boss. The bosses start off easy enough, but by the third stage, the difficulty ramps up significantly. You will have to dodge volleys of lasers and enemies while trying to shoot a usually tiny weak point on each boss. Even after hours of trial and error, the stages and bosses are extremely challenging. You can adjust the difficulty setting or use cheat codes to earn more lives, but you'll still find yourself dying frequently.

Gradius III looks a lot like any other Gradius game. Each stage carries the space theme but still displays a decent amount of variety. The bosses are huge and detailed, while many of the enemies and obstacles you have to overcome are imaginative and look good. Like in most shooters, there's almost always a lot happening onscreen in Gradius III. The problem is that when there's a lot happening onscreen, the game just can't keep up with the action. The slowdown is pervasive enough to completely kill the action at times. Unlike the frame rate, the music keeps up with the action fairly well, with energetic tunes fitting the lone space hero theme perfectly.

Despite its prohibitive difficulty and pathetic frame rate, Gradius III is a fun game. The customizable weapons bring a decent amount of variety and depth to a style of game that typically relies on pattern recognition and memorization almost entirely. The level design and classically huge bosses will test your mettle while maintaining the illusion of being able to beat them that will keep you coming back for more punishment time and time again. 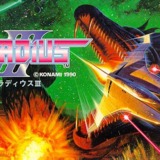 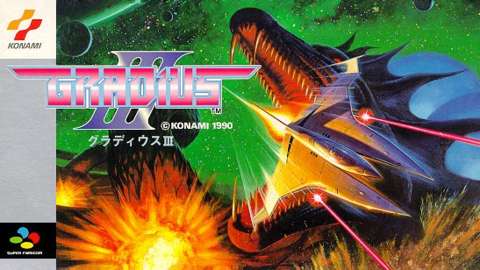