While it can't compete with the graphics of Star Fox 64 or RayStorm, gameplay is what counts, and Gradius Gaiden delivers.

Konami's got a great thing going in Gradius - shooters are a dying breed these days, and not many companies can keep a series as consistent as Gradius has been over the past 17 years. US gamers have been without a Gradius fix since Gradius III hit the Super NES, but there's always been a market for Konami's line of shooters in Japan. For the past few years, Konami has rereleased its classic shooters as "Deluxe Packs." Gradius Deluxe Pack contained the first two games in the series (the second one was never released in the US), and Konami just recently released a pack of Salamander games (aka Life Force).

That brings us to Gradius Gaiden, which is a step in a different direction for a series that has gained Konami notoriety as a master of shooter design. The story is about what you'd expect - an unknown force is terrorizing the galaxy and has wiped out 99 percent of Planet Gradius' forces. As the last hope, four fighters are sent by the Gradius Army to penetrate the Dark Nebula and bring peace to the galaxy once more. For the first time, Vic Viper has help defending the galaxy with three new fighters: Lord British, Jade Knight, and Falchion Beta; each equipped with his own weapon configurations.

Your fighter powers up in stages, just like the previous games in the series. Collecting power-up capsules lets you select which weapons you'll fight with. A new addition in Gaiden is the ability to edit your power-up gauge, so if a weapon you really like requires you to normally get four power-ups, you can move it closer to the front so it only requires two. Each power-up has two levels of strength, and each fighter has the good old "speed up" and "option" power-ups. There's also an option to save your configuration and high scores to the PlayStation's memory card.

The graphics have changed, too. The size of your ship has shrunk so more enemies, graphics, and so on, can be put on the screen together. Two-player games do cause it to slow down, depending on how many power-ups each ship has. With two completely powered up ships on the screen simultaneously, the game slows to a crawl. Aside from that, the graphics are spectacular. Leaving the game in 2D means the series can get more detailed than it's ever been before, but the graphics aren't over the top like some 32-bit shooters. Shooters with multiple layers of colorful backgrounds sometimes make it difficult to maneuver around enemy fire. With most of the stages in Gaiden having a black (or almost black) background, shots are more easily discernible against background elements. There's no excuse for being killed in this one, there's no enemy fire you "didn't see." Being on the PlayStation, the game has a CG-rendered intro, but it's not as good as the intro to Gradius Deluxe Pack.

The tunes are good, but not nearly as infectious as the 8-bit Gradius music. In the options screen, you can choose to have a male or female announcer tell you what power-ups you've selected, alert you to boss attacks, and taunt you when it's "Game Over." There's even a Star Wars-style scrolling story that plays if you let the game's demo run. Konami hasn't changed many of the game's sound effects, which will be familiar to fans of the series.

Speaking of familiar faces, the enemies and bosses in Gradius Gaiden are a mixed bag of old and new. While there are stages and bosses in Gaiden from the first three games, there's plenty of new stuff. The heads from Easter Island return for their own stage, and one of the last levels in the game is reminiscent of the 8-bit Gradius first stage (with a few gravitational changes). The Organic Fortress lives up to its name and moves around as you try to avoid hitting the endless waves of enemy ships. The Green Inferno is a living jungle with traps and obstacles galore, all positioned in a never-ending horizontal path where you choose which road to take. The last three stages are signature Konami material, one with a race through tunnels as they open and close off very quickly and dead-end at every turn. As you progress through the game, the bosses get really tough. As you'll find out, when you think you've beaten a boss the first time, it can always reawaken in a new form to cause more damage. As with other Konami shooters, some may find the end of Gradius Gaiden unsatisfying, but the gameplay and challenge through the game's nine levels are easily enough to keep most happy.

Just because this is an import, don't let that scare you. The game is completely in English, down to the level names, story, and minitutorial in the game's demo. The levels are amazing, with some of the best design I've seen in shooters in a long time. The slowdown in two-player mode hurts the game a bit, but the graphics (especially in later levels) are fantastic. Of course, the Konami Code from the old days of the NES still works in Gradius Gaiden. There are seven levels of difficulty, from easiest to hardest (and hardest is really hard!). Konami's designers still have the touch and have made the Gradius port to the 32-bit generation nicely. While it can't compete with the graphics of Star Fox 64 or RayStorm, gameplay is what counts, and Gradius Gaiden delivers. 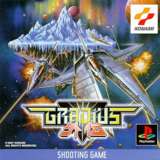 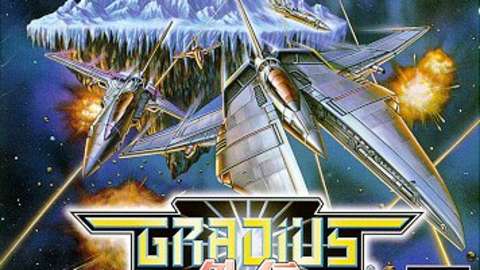 While it can't compete with the graphics of Star Fox 64 or RayStorm, gameplay is what counts, and Gradius Gaiden delivers.