More than a decade's worth of games from Konami's classic space shoot-'em-up series is contained in this great collection, which offers plenty of intense action, not just nostalgia.

While the Vic Viper might not be a household name on quite the same level as Mario or Master Chief, it still is emblematic of what makes video games great. This spacecraft and its distinctive split-nose design is the unlikely hero of Gradius, possibly the all-time greatest series of shoot-'em-ups. This style of game simply challenges you to survive wave after wave of enemies, by maneuvering to avoid them and their bullets while returning fire. The Gradius series' primary innovation was its customizable power-up system, though the games also featured some distinctive level design and excellent presentation quality. Now five games from the Gradius series--most of which have never been released before in North America--are available on one PSP disc, in the form of Gradius Collection. It's a must-have for any shoot-'em-up fan, but even those who weren't pumping quarters into arcade cabinets during the series' heyday should be able to appreciate the pure action and challenge these games deliver.

The original Gradius game dates back to 1985 and stands as the definitive side-scrolling space shoot-'em-up, in which you, as a lone fighter pilot, are expected to vanquish an entire alien armada without any backup. Fantastic. This game, of course, is part of the package in Gradius Collection, along with Gradius II (1988), Gradius III (1989), Gradius IV (1998), and Gradius Gaiden (1997). That's a lot of Gradius games, though the one that's notably missing is Life Force, the spin-off sequel to Gradius that introduced two-player gameplay and vertical-scrolling stages. 2004's excellent Gradius V is also absent, though maybe it's too much to expect this relatively recent game to be included. Despite these omissions, it's hard to be disappointed by how much quality action is presented in this collection.

It's important to consider these games in their proper context to appreciate them, which is to say, they don't all stand tall and proud on their own merits by today's standards. But some of them do. Predictably, the later games in the series, including Gradius IV and the PlayStation's Gradius Gaiden, feature the best visuals, and they still look quite impressive to this day. Really, the only game in the series that hasn't held up particularly well is the original Gradius. What's amazing is how good Gradius II is. It's nearly 20 years old, but it's superior to the original game by leaps and bounds and offers some of the most finely tuned challenge of any game in the package. The very first level has you maneuvering around huge, fiery planetoids spewing forth fireball-spitting flaming dragons every which way... Seeing all this makes Life Force's absence a lot easier to accept.

Gradius III is the toughest game in the batch, giving you the impression that Konami simply took its shoot-'em-up formula past some sort of logical extreme with that game. As more and more players mastered the fundamentals of this style of gaming, Gradius III gave them a stupefying challenge, and probably contributed to the gradual demise of the genre in the process. It's still got some interesting-looking levels and a slick presentation, but you should expect to have to drop the difficulty and crank up your extra lives to get through this one. Gradius IV is next in the game's lineup, even though it was technically released after Gradius Gaiden. Gradius IV is a pretty game that treads a lot of the same ground as its predecessors, whereas Gradius Gaiden is arguably the best game in the bunch. It lets you choose between four different spacecraft (so you can give the poor Vic Viper a much-needed breather), so it's got the greatest amount of replay value up front, and it still looks and sounds great. The original PlayStation version of Gradius Gaiden also featured a two-player option, though unfortunately, that aspect was cut from this version. Thankfully, Gradius Collection makes it pretty easy to jump between all these different games, especially since you can quit out to the game selection menu at any time during gameplay (although you can't quit to the main menu of the game you're playing, which is a minor issue). Loading times are fairly quick, and there's no more loading once you get into a game.

One aspect of gameplay that makes all these games considerably challenging is that your ship explodes after taking just one enemy bullet or colliding with an enemy or the environment. Force fields can make you temporarily invulnerable, but you still need to be extremely careful at all times...especially because, if you blow up, you need to restart the same sequence over again. Other shoot-'em-ups let you pick up immediately from where you died and give you temporary invulnerability, which allows you to slug it out against tough opponents as long as you have enough extra lives. But not these games. What's more punishing is that you lose all of your power-ups when you die, so you'll have just your ship's basic pea-shooter when you start the sequence over. It feels woefully inadequate for contending with the series' numerous tough boss opponents, but hey, overcoming ridiculous enemy odds is part of the fun.

The games in Gradius Collection are all inherently very tough, but some concessions are made to make the challenge more flexible. Surprisingly enough, you can save your progress at any time during gameplay from the pause menu, which is useful if you plan to play the game on the go, or if you want to practice a particular part of a level over and over. The game also defaults to "tuned" settings for each game, which stretches the screen to fit the 16:9 aspect ratio of the PSP, reduces the collision area of your ship (effectively making you harder to hit), and also tones down the difficulty. Don't worry, though--the games are still plenty hard this way, and if you like, you can easily adjust the setting to "original." You can also fine-tune the number of lives you have to start with, how many points you need to earn additional extra lives, and so on. The games also let you rapid-fire your weapons by pressing and holding triangle button, rather than having to hammer on the shoot button, as you needed to in the arcades. Furthermore, by default there's a "semi-auto" option for the games' power-up system, which makes your ship automatically select power-ups in a sensible order as you pick up more power-up capsules. In the original versions of these games, you needed to press a button to select a given power-up, which gave you a lot more to think about while desperately trying to avoid blowing up.

In addition to the games themselves, Gradius Collection features a "gallery" mode that mostly consists of a music player that lets you listen to all these games' classic tunes. The Gradius series really captures that 16-bit sound that you might associate with the glory days of video games if you've been playing them for a while. You can also view a few cinematic cutscenes from some of the later games. Gradius Collection probably could have benefited from providing more information or background about each game, considering this package is clearly aimed at fans of this subject matter. But what's important is that all five of the games in here are still challenging, fun to play, and genuinely exciting. 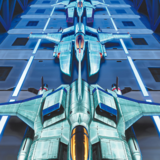