If you're up for a challenge--and you don't mind trial and error--Gothic II won't hesitate to give it to you.

Gothic II is a single-player role-playing sequel in which you play as a lone hero who must do battle with bandits, orcs, and dragons in a sprawling 3D world. Like in the first game, you control a soft-spoken hero from a behind-the-back perspective and follow one of three career paths in pursuit of his ultimate goal--which, in this case, is to stave off an assault by orcs and dragons unleashed by the death of a demon, the same one that he defeated at the end of the first game. While Gothic II has various improvements, it retains the clunky 3D control scheme for movement and combat used in the first game, and it's just as unforgiving, if not more so. However, if you're up for a challenge, have a fairly good computer, and don't mind the control scheme, you'll find that Gothic II has plenty to offer.

Gothic II's story and setting draw upon traditional medieval high-fantasy elements--very traditional ones. Your character can equip himself with swords, axes, and crossbows, as well as cast fireball spells and healing magic, though like in the original Gothic, he starts out as a helpless weakling and remains so for quite some time. Yet you have to engage in battle in nearly all of the quests you undertake, and like the first game, Gothic II doesn't give you much of an idea of the relative strength of your enemies. This basically means that you'll die horribly, and quite often, until you learn through trial and error which challenges you can reasonably take on, and which you can't.

The combat is about as clunky as that of the first game. The control scheme requires you to press and hold an action key, then move in a direction to swing your weapon or cast a spell, while you can turn and look around you either with the mouse or keyboard. The clunky setup isn't conducive to dodging effectively while fighting, so unless you completely outclass your enemies, you'll often find the only way to effectively do battle with them (and stand a chance) is to get them stuck on an object in the environment, since Gothic II's pathfinding is sometimes problematic. You might have been able to do battle with your enemies a bit better if you could quickly swap weapons or use healing spells or potions with hotkeys, but you can't do either. Instead, you must use Gothic II's clumsy inventory system, which opens up all items in an unchangeable list that you can't reorganize or create shortcuts to, so you must navigate it manually. Accessing your inventory causes you to sheathe your weapon or cease casting spells and brings you to a dead stop, making you a sitting duck.

This is a shame, since Gothic II is otherwise a large and surprisingly open-ended game that offers a great many interesting quests that can be solved in multiple ways, as well as a few key improvements to the original game. Though the game's setting seems clichéd, the world it's set in is surprisingly well developed and even features a few different political factions, which your character can join or oppose. Gothic II also features a first-person view that helps mitigate camera problems in enclosed areas, as well as a quest journal that keeps track of active quests. Gothic II's world is also large and sprawling, and it features individual spawns of monsters and minor side quests that can be accessed by simply wandering off into the wilderness, but you'll need to keep track of your progress and position using in-game maps that are actually objects your character must purchase and manually consult.

Like the first game, and like Bethesda's Morrowind, Gothic II takes a do-it-yourself approach to its gameplay. Don't expect to see much in the way of automaps, all-inclusive item merchants, instantaneous transportation, or any other real amenities, other than the quest journal, in Gothic II. If you want to keep track of your position, you have to open your own map and make your own notes outside of the game. If you want to get somewhere, you run to that location. If you're not sure you can defeat a new enemy, you save your game, try attacking, and if you get slaughtered, you reload your last save while making a mental note that you'll need to come back at a later point, when you're stronger. If you're up for this sort of challenge--and you don't mind committing the extra time to this sort of trial-and-error gameplay--Gothic II won't hesitate to give it to you.

Gothic II also looks and sounds fairly good. The game features an animated sky and day-and-night cycles, as well as fairly good texture work for its buildings--a noticeable improvement over those in the first game. Gothic II's wilderness areas also feature an overabundance of vegetation, including trees with hanging branches and large bushes, which don't look especially good but do obstruct your normal view and will make you glad to have the game's new first-person view. Gothic II's character textures are decent and are also an improvement over those of the first game, but like the first game's models, Gothic II's models are rather blocky.

Furthermore, like in the first game, Gothic II's characters are also quite verbose. The sequel features a great deal of speech that isn't always delivered perfectly (the hero's speech, in particular, sometimes puts inflections on all the wrong words, as though the actor were reading the lines out of context), but it's all generally quite good, even if some of it still occasionally seems out of place. You may find it a bit unusual to explore a medieval village and talk to what appear to be normal-looking medieval peasants, only to hear them speak in a twangy Texan accent, or like a jive-talking pimp near the village brothel. But this unusual delivery will be par for the course if you've played the original Gothic, and even if you haven't, you may still find at least some of it to be enjoyably goofy. Gothic II's other sound effects are minimalistic, as is the game's symphonic soundtrack, which is certainly appropriate, even if it isn't memorable.

Considering both its many quests and its trial-and-error gameplay, Gothic II is a substantially long game, and its different quests and different professions allow for some good replay value. If you're the sort of person who takes issue with constantly reloading previously saved games, who absolutely needs modern RPG amenities like an automap and an easy-to-use combat system, and who doesn't like the prospect of fighting and losing many battles, you should approach Gothic II with caution. However, if you're up for a real challenge, and don't mind fighting with (and against) the game's clunky control scheme, Gothic II will provide you with many hours of difficult battles, exploration, and interesting quests. 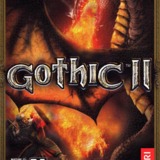