Few games take the concept of altering reality to as artistic a level as Gorogoa. This labor of love made chiefly by one developer is a gorgeous and intriguing puzzle game that works because of its stunning art and intelligent puzzle design. Far from a traditional game, Gorogoa is a slow and methodical trip into the surreal.

Gorogoa is a compact game with a minimalist design that works exceptionally well. The entire story of two young men researching the lore of gods and monsters in their world is told through the striking visuals and musical score. The focus of the game as a whole is on the puzzle mechanics, which are more than up to the task of making this two-to-three-hour excursion worth taking.

A simplified version of classic point and click adventure games, you tap on interactive elements within Gorogoa's artwork to trigger a mini-event. There are four panels on the main screen, each of which can hold a square-shaped picture. You can slide any picture into any of the panels and many of the puzzles require manipulating the pictures so they connect with each other.

Tapping on specific areas in a picture will usually zoom in on that element, and often if the element is a window or door, it will zoom right into a new location. Using beautifully detailed pictures, Gorogoa creates puzzles that work by altering the perception of the game’s own reality. Sometimes, for instance, a lamp in one picture is dark and you’ll have to find a lightsource within one of the other pictures.

To do this, you’ll have to find something glowing within another image, zoom in on the light source and then the lamp, and then move the circular hole of the lamp over the lightsource. This combines the two images to create something new. It also alters the remaining image(s) and usually leads to completely new paintings to explore.

Using simple touch controls, Gorogoa unveils surprisingly layered puzzles that can be confounding but that never feel illogical. It can be a challenge to figure out how all the images you’re provided at any given time interact with one another, but once you do, it all makes sense. Nothing feels random or contrived, which was a significant issue in classic adventure games.

This sense of order to the game’s world also leads to a palpable sense of accomplishment when you sort everything out. The first few puzzles ease you into the mechanics of Gorogoa, then the game throws you into an incredibly complex maze of clockwork-like machinations that require manipulating multiple panels in quick succession. The idea of moving a falling object from one aspect of a picture down into others in order to cause something to break is genius and extremely satisfying when you get it right.

The art is stunning, the atmosphere fascinating, and the puzzles are incredibly devious and clever. Gorogoa might not be a long game, but it is easily one of the most engaging puzzle games in recent memory. 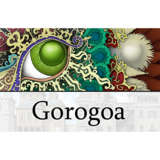