While it's sort of impressive on some level that the DS can deliver an experience similar to the console version, the experience it's based on wasn't any fun to begin with.

GoldenEye: Rogue Agent for the Nintendo DS packs a very similar experience to the console game of the same name, which was released last year. The level design is basically the same; the same sort of tactics still work; and the story still follows the same path. That would be great...if the original game was any good. While it's sort of impressive on some level that the DS can deliver a similar experience, the experience it's based on wasn't any fun to begin with.

In Rogue Agent, you play as a former associate of James Bond who loses an eye. Then you go bad and sign up with Auric Goldfinger. But you won't be getting revenge on the good guys. Instead, you'll get caught up in a rumble between Goldfings and Dr. Julius No, who just so happens to be the guy responsible for your eye loss. Goldfinger springs for a new bionic eye (which happens to be golden) that gives you a few basic abilities, and then you set off into a pretty standard first-person shooter, complete with dual wielding, a variety of different weapons, and the occasional grenade toss. To sell the whole "bad guy" nature of Rogue Agent, you can also take hostages and use them as human shields. However, this just slows you down. Considering that all your health will recharge if you back off for a few seconds, avoiding damage isn't really that much of a concern.

Your eye powers are the game's lone twist, and they add a little variety. For example, your first power gives you the ability to see through walls. You'll also occasionally find a mag rifle, which is basically a railgun that can fire through walls. When you put these two aspects together, you're blasting enemies that can't even see you, which is handy.

While the game's fairly dull level design certainly doesn't help matters, it's the control options that will initially impede your progress. The game expects you to use the thumb strap, it seems, because you'll have to steer with the touch screen while still having access to both shoulder buttons, since you'll need both to fire your weapons. Try finding a comfortable way to do that with a stylus. Given up yet? Then you're probably just better off switching to a control mode that doesn't rely on the touch screen for anything other than picking up weapons and reloading them, because your only other option is an awkward layout that lets you select which weapon fires from the shoulder button by tapping on the touch screen. In the game's lone functional control mode, the left D pad moves and strafes, and the four buttons on the right side are used as a second D pad of sorts, letting you look around and turn. This control scheme isn't exactly optimal, either, but we found it to be the easiest one to use. In all cases, you'll have to turn on your eye powers by tapping entirely-too-tiny icons on the touch screen.

As you play, you'll unlock different things, including some additional training-style levels. But even with the unlockable stuff, there's not too much here to see. If you're dedicated to getting through it, you'll finish Rogue Agent in an afternoon. The game also has a handful of multiplayer modes that up to four players can participate in. You'll find standard deathmatch and team deathmatch, as well as tug-of-war and domination. Unfortunately, most of the characters and maps are locked until you play the single-player campaign. So anyone looking to dive right into deathmatch may find that to be an additional hassle. It's nice, though, that the game supports multiplayer with only one copy of the game, as well as lets you play skirmish matches against bots (though the artificial intelligence-controlled enemies are awfully stupid). Unfortunately, none of the multiplayer action is very good, either, so the whole mode's usefulness is limited.

At least the game looks good. The frame rate is smooth, and the textures are just fine for a Nintendo DS game. The sound also does a good job, with a collection of upbeat MIDI tunes that seems like it would fit perfectly in the Super Nintendo era, in addition to a collection of appropriate gunfire and explosions.

GoldenEye: Rogue Agent may be the debut first-person shooter for the Nintendo DS, but its generally uninspired levels and weak control make it tough to recommend to shooter fans. If you're absolutely dying to play a shooter on the DS, and Metroid isn't coming out fast enough to satiate you, you might want to pick this up. But for the most part, you're better off waiting for something else to come along. 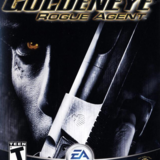