GoldenEye 007 is an entirely new and incredibly fun shooter that doesn't rely on its prestigious pedigree to provide thrills.

Thirteen years ago, a groundbreaking first-person shooter called GoldenEye 007 was released for the Nintendo 64. It's impossible to ignore the impact this game had on the future of the industry, but don't assume that the Wii game bearing the same name is a mere remake of the seminal original. The new GoldenEye 007 is a modern game that refuses to cater to an old-school audience, giving it the freedom to develop a personality all its own. The varied and lengthy campaign smartly alternates between tense stealth missions and exhilarating run-and-gun forays that make it difficult to pull away. And though the online multiplayer uses the ubiquitous perks system to reward you for your hard work, it's the sharp controls and complex levels that will have you coming back for more. GoldenEye 007 doesn't rely on the memories of an aged shooter to be great; it earns that distinction on its own merits.

GoldenEye 007 is an entirely new game, but that doesn't mean it has completely turned its back on everything that made the original distinct. James Bond is a world-class spy, and both games dramatize this fascinating profession by putting you through the rigors of globe-trotting espionage. There is a strong emphasis on stealth in GoldenEye that rewards patient players who would rather silently avoid a firefight than rush in guns blazing. Whether you favor a sure shot from your silenced pistol or a quick melee strike when you move in close, quietly killing off your enemies is a thrilling rush that serves as your main tactic for most of this campaign. The AI is occasionally alerted even when you swear you're safely behind cover, but that inconsistency is rare. For the most part, using stealth is your wisest strategy, and you can discreetly kill off a small platoon without anyone noticing that something's wrong.

Of course, a spy is more than just a silent assassin. James Bond doesn't travel around the world just to satiate his bloodlust, after all; he's on a mission to discover some kind of horrible truth. And to acquire these facts, you have to do some sleuthing along the way. Every level has objectives you must complete in between bouts of killing, and though they provide an interesting diversion from the core gameplay, they're not exactly mind-blowing. Most of them involve utilizing your handy smartphone to do things like snap a photograph or hack a device, and it's just a matter of lining up your target and hitting a button. But what makes these moments as impactful as the shoot-to-kill action is the problem solving that goes along with them. For example, in the first level, you need to access a room that is seemingly sealed shut. But if you poke your gun through a small opening in the window, you can shoot off the lock barring your entry. These puzzles are easy enough if you just take a quick peek around the environment, but they do a good job of reinforcing the fact that you're a spy.

James Bond has no problem gathering vital information and certainly knows how to avoid a fight, but when the action heats up, he's not afraid to take advantage of his license to kill. The shooting in GoldenEye is incredibly smooth whether you favor the quick-pointing precision of the Wii Remote or the traditional, dual-analog maneuverability offered by the GameCube or Classic Controller. You can easily target whatever vital organ or flailing appendage you prefer on an onrushing enemy, and the dull impact of a bullet that strikes pay dirt delivers an exhilarating thrill. Sharp controls aren't the only reason that shooting is such a satisfying endeavor in GoldenEye; your impressive loadout gives you plenty of firepower with which to play around. Pistols, rifles, shotguns, and more come with all sorts of different attributes, and it's easy to find one you like because they all feel so good. But James Bond has plenty of options beyond firing his gun, and the smooth shooting mechanics ensure you're immersed no matter which path you take.

The single-player campaign stretches on for more than 10 hours, and a good deal of variety banishes any chance of repetition ruining your enjoyment. Some levels are designed with stealth in mind while others force combat to the forefront, but you ultimately have the choice in how you play. The tempo changes in a heartbeat if you accidentally alert your enemies, and though you may kick yourself for being so clumsy, it's always a blast to loudly gun down your enemies when you were being so quiet just a moment earlier. There are other gameplay twists that ensure the campaign doesn't tread predictable waters: brief vehicle sections thrust raw destructive power into your hands, a frantic escort sequence pushes your reflexes to the edge, and even an intense boss fight is thrown in for good measure. The only misstep comes in the form of tedious quick-time events that are overflowing with cinematic flair but aren't any fun to play. But aside from these moments, GoldenEye 007 stays engaging all the way through.

The staying power of GoldenEye stretches far beyond completion of the last level. This is a game that's meant to be played more than once because the higher difficulty levels do more than just ramp up the ruthlessness of your enemies. The harder the game is, the more objectives you have to complete to move on, and replaying these levels gives you a new appreciation for how well they're constructed. Rooms and routes you never realized existed are suddenly integral parts of the experience, making another play-through feel fresh even though you're traipsing through the same environments. What's really interesting is how your health is managed. In all but the hardest difficulty level, you have regenerating health. Because you return to full strength by staying out of fire for a few seconds, the campaign veers on the easy side, though it's still challenging enough to make it rewarding when you do come out on top. But when you play on the hardest difficulty, your health no longer regenerates and you collect armor to save you from death. This ratchets up the tension another notch, making you use every stealth trick you've learned to stay alive.

The only problem with replaying levels comes from the invasive story. Pierce Brosnan played James Bond in the original game and movie, but he has been unceremoniously axed in this latest outing. In his stead is current Bond actor Daniel Craig. But it doesn't really matter who assumes the lead role when the story is never pushed beyond spy-thriller cliches. Evil Russians and predictable plot twists are the driving forces of this newly written story, but even though there are some well-done action sequences, the cutscenes ultimately fail to enhance the experience. James Bond is a man of fast action, and the levels embrace his single-minded determination. Unfortunately, the cutscenes are unskippable, so you have to sit through the story every time you replay a level. These unremarkable sequences become unpleasant intrusions, and its grueling to have to wait them out, knowing how much you have to bust your butt to meet the stringent requirements when you reassume control.

Aside from the intrusive story and a few lame quick-time events, the campaign is an incredible experience. But if you hunger for something beyond the expansive single-player suite, there's engaging competitive multiplayer to take part in as well. If you favor the online realm, you can square off against up to seven other players in a variety of play types. Sharp controls and clever level design make it a blast to gun down strangers and friends alike; the rewards system also gives you something to strive for aside from the satisfying thrill of victory. You unlock new weapons, gadgets, and modes as you sink more time into the game, so there's always something to tinker with after a successful play session. But there are a few missteps along the way. First, there's no support for WiiSpeak. It's awfully lonely gunning down voiceless players, and the lack of communication makes the team matches slightly chaotic. Also, there is a distinct lack of Bond flavor. You assume control of a nameless grunt working for either MI6 or the Russians, and aside from a few nods like the Golden Gun mode, there's little here to differentiate this from other shooters. Despite those issues, it is still a lot of fun, and a smooth frame rate ensures technology won't impact your enjoyment.

Offline fare is just as robust, but in a different way. The experience points system has been completely scrapped, but in its stead is a good array of modifiers to let you put your own spin on how things play out. You and up to three friends take part in split-screen action, and you can tweak options that make your grenades sticky or bouncy, force players to explode when they come into contact with others, or shrink everyone down to bite-sized proportions. The best of these instantly kills anyone who stands still for too long. It's a great way to eliminate snipers and campers because it makes people push the action rather than wait for things to come to them. You can also choose from a bunch of different James Bond characters from movies past. Some of them, like Oddjob, even have a special ability. He can throw a hat instead of a grenade, which is surprisingly deadly. All of these options are great, but there are two flaws. First, everything feels really slow, moving half as fast as online or single-player competition. Second, there aren't any bots, so there is downtime while you search for your next victim. It's still fun to mess around with all the tweaks, but these issues hinder the long-term appeal.

Despite a few problems in the multiplayer department, GoldenEye 007 is a great game that does justice to its prestigious name. Instead of living in the past, Bond's latest adventure embraces the present. The explosive single-player campaign is an incredible ride all the way through, and it's well worth replaying a few times just to see what sort of cool secrets the harder difficulties hide. The online multiplayer may be James Bond in name only, but that won't matter when you're gunning down enemies and racking up experience points. Sharp controls, clever level design, and a wealth of gameplay options are the backbone of this exhilarating shooter, and it absolutely nails its core tenets. GoldenEye 007 has no need to rely on nostalgia when it so expertly creates such thrilling new memories. 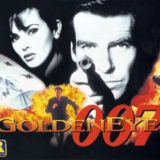 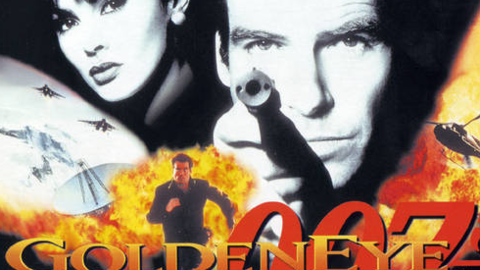 GoldenEye makes its Wii debut in the 2010 holiday season.