Golden Sun: The Lost Age is an excellent follow-up to the original Golden Sun.

When Golden Sun was released for the Game Boy Advance last year, the game quickly stood out as one of the best titles available for the system. Camelot Software Planning's expertise in the RPG genre, honed on games such as Sega's Shining Force series, resulted in a stellar mix of cutting-edge graphics and gameplay that blended classic RPG elements with some fresh new ideas. One of the few issues that players had with the game was its abrupt ending and relatively short length. Part of the reason for that was the developer's decision to parcel out the game's story in installments, with the first Golden Sun covering the first chapter in the tale. For the next entry in the series, Golden Sun: The Lost Age, Camelot has followed up with an even more polished game that exceeds its predecessor's high level of quality.

For those unfamiliar with the Golden Sun mythos, the game is set in the world of Weyard. The fragile land was almost torn asunder in days past, when men abused a mystical power called alchemy. However, before disaster struck, a small group of wise men sealed alchemy's power into a sanctum hidden in Mount Aleph and charged the inhabitants of Vale with guarding it. Unfortunately, a pair of evildoers named Saturous and Menardi attempted to take the power of alchemy from the sanctum at the start of the original Golden Sun. While their efforts were disrupted by the intervention of two residents of Vale, Isaac and Garret, the elemental stars--key to the power of alchemy--were stolen. The evil duo intends to harness the power of the stars to light four elemental lighthouses spread throughout Weyard, which will break the seal on the ancient power and unleash it.

For those keeping score, the effort to halt Saturous and Menardi hasn't gone terribly well. At the end of the original Golden Sun, the pair have managed to fire up the first lighthouse and was well on its way toward carrying out their evil plans. If you haven't played through the first game, don't fret--Golden Sun: The Lost Age features a lengthy recap of events that covers the key points of the first chapter. The Lost Age actually picks up shortly before the end of Golden Sun. You'll take control of Jenna, a childhood friend of Isaac and Garret who was kidnapped at the beginning of the first game. The game will follow Jenna and her brother Felix as they explore a new continent and take a different approach to dealing with Saturous and Menardi's plans to revive alchemy in the world.

If you've played the original Golden Sun or clocked in time with most any RPG, you'll find Golden Sun: The Lost Age to be a pretty accessible experience. The game plays very much like its predecessor and follows the tried-and-true conventions of the genre. You'll travel the world with your party of three other characters, making your way from town to town and talking to people and solving their problems. Along the way, a fair share of puzzles will test your wits. This time out, the puzzles are considerably more challenging, and in keeping with the game's 16-bit influences, you'll find several classic RPG conventions used in the dungeon puzzles, such as having to go through rooms in specific sequence or change the flow of water or wind currents to open up new areas. You'll also find some puzzle elements pop up when collecting the elemental creatures known as djinn. While collecting the creatures was fairly straightforward in the original Golden Sun, you'll find that capturing them is much more challenging this time around, thanks to their predilection for escape.

As you make your way through the game, you'll find a liberal dose of turn-based combat to keep you on your toes. The Lost Age makes use of the same basic combat mechanics as the previous game, with a new twist. The game's turn-based combat is menu-driven and should be familiar to fans of the Shining Force games. Each character will have three types of attacks: standard physical attacks, psyenergy attacks (which take the place of traditional magic), and special moves performed by calling upon your djinn.

While the standard and psyenergy attacks all function the same as in Golden Sun, using the djinn has been tweaked slightly. In the previous game, the element-based djinn, which come in water, fire, earth, and wind varieties, could be assigned to members of your party and provided various stat enhancements that could also affect that character's class. In addition, the creatures provided you with two distinct options in combat: You were able to call on them once in a fight and unleash their abilities, which ranged from powerful attacks on an enemy to status enhancements that would affect you and your party. Once unleashed, the djinn would enter the standby mode, which would allow you to summon unique elemental creatures to fight for you based on the number of standby djinn you had. While those abilities are back in The Lost Age, you'll also be able to summon new creatures using ancient relics that will teach you different combinations of djinn for use in summoning creatures. In addition to looking quite sharp, the new creatures pack quite a punch and are very handy in combat. As before, combat is speedy and user-friendly, with a good amount of strategy thrown into the mix. It's also worth mentioning that The Lost Age doesn't feature intelligent targeting. As a result, members of your party will not target the next available enemy if their intended target is defeated before their turn to attack comes up.

Besides its single-player mode, Golden Sun: The Lost Age features some nice extras in the form of a multiplayer game and GBA link-cable support. Just like its predecessor, The Lost Age features a battle mode that will let you use your party to fight a series of monsters you've encountered in the game. You'll also be able to use your save data from the single-player mode to pit your party against a friend's using a GBA link cable. As before, the mode is mainly included to add a change of pace, as you won't be penalized or rewarded for playing it solo or with a friend. However, the GBA link cable will also come in handy if you have a copy of the original game. You'll be able to transfer party data from the original into Golden Sun: The Lost Age. Although the cable isn't required to bring data over, it certainly beats the gargantuan password you'll have to enter if you don't have a cable.

The graphics in Golden Sun: The Lost Age are on par with those seen in its predecessor and are some of the finest on the Game Boy Advance. The character sprites are impressively detailed and feature surprisingly animated faces for 2D characters. The game's world map features smoother scrolling and slightly better detail than its predecessor. The environments in the game boats excellent artwork and a nice sense of style that gives the various villages and locales you'll be exploring a solid amount of variety. The pseudo-3D look the series uses for combat, complete with polygonal effects for psyenergy and when summoning djinn, is still impressive. The summon effects for higher-level djinn and the new combo creatures are especially slick. Another aspect of the game's graphics that stands out in comparison with the original is the stronger emphasis on a more cinematic presentation of the story. You'll find a number of elaborate cinemas that highlight some memorable sequences in the game and do a fine job of conveying a sense of scale. Overall, the game sports a more assured sense of style that compensates for the lack of any dramatic improvements in the series' visuals.

The game's audio follows suit. The sound effects in the game are decent mix of ambient sound and satisfying effects--like the collision effect during combat--that do a fine job of setting the tone. The strongest element in the game's audio presentation, however, is the excellent soundtrack. While you'll hear a few familiar themes in the game, Golden Sun: The Lost Age features its own unique tunes that are a mix of various music styles and feature impressive little touches like snippets of vocals. The excellent overall package is a strong testament to the Game Boy Advance's sound capabilities.

Ultimately, Golden Sun: The Lost Age is an excellent follow-up to the original Golden Sun. The game makes some solid refinements to the series' gameplay, features a longer quest, and makes some nice tweaks to the series' presentation. Despite the fact that the Game Boy Advance library has seen some notable entries in the RPG genre--such as Breath of Fire and Breath of Fire II, Tactics Ogre, Pokémon Ruby and Sapphire, and Lunar Legend--since the original game hit, Golden Sun: The Lost Age still manages to stand tall. 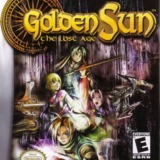