Golden Axe is an influential arcade classic, and the Sega Genesis version kept its intense hack-and-slash gameplay intact, so it's still fun to pick up and play.

Before Street Fighter II revolutionized video arcades in 1991 with its brand of competitive one-on-one fighting, side-scrolling beat-'em-ups were the next best thing. The best games of this sort featured intense-looking action, just enough story to draw you in, interesting characters, and skill-based gameplay that encouraged you to get better so you could play longer for your 25 cents. Best of all, you could play these games together with a friend. Together with the earlier Double Dragon and the later Final Fight, Sega's Golden Axe is one of the all-time greatest examples of this style of game. The Sega Genesis version that's featured on the Wii Virtual Console service isn't as good as its original arcade counterpart, but the action still delivers, making this brief-but-replayable hack-and-slash game worth playing after all these years.

In its day, Golden Axe was close to being a revolutionary game since it featured three completely different playable characters: Ax Battler, who's basically Conan the Barbarian with a haircut; Tyris Flare, a scantily clad female warrior; and Gilius Thunderhead, a dwarf armed with a scary-looking battle axe. As any of these vengeful characters, your goal is to fight your way through several stages filled with enemy barbarians, arrogant amazons, war-hammer-wielding giants, undead skeletons, and more in an effort to defeat Death Adder, a bloodthirsty villain who's ransacked a once-peaceful fantasy world. The game features a number of memorable enemies and stages, and the combat itself is fast and responsive, affording you a good number of different moves and combos. Of all the different slashes, jump kicks, throws, and magic spells available, probably the best aspect of the combat is how you could bash enemies over their heads with the pommel of your weapon; together with some good-looking animations, this gave Golden Axe the visceral feel of the sword-and-sorcery movies that were popular in the '80s. Golden Axe even let you ride on a few different monsters. A great musical score and hard-hitting sound effects rounded out the package, though these suffered in translation to the Genesis--this version of the game, perfectly emulated on the Wii, sounds crude at this point.

Golden Axe features the story-driven arcade mode for one or two players, plus a duel mode that lets you take on successively tougher challenges. You can also battle against a friend. The duels were exclusive to the Genesis version of the game and helped make up for the fact that it didn't look or sound as good as the arcade original. The game uses three buttons and is a better fit for the Classic Controller or GameCube controller, though it's playable using the Wii Remote, as well.

If you have fond memories of playing Golden Axe for the Genesis, you'll likely find that it's still a lot of fun. Even if you never played the game in its heyday, this is an influential game that's worth experiencing by anyone interested in getting back to the roots of what makes cooperative action gaming so exciting. Golden Axe goes for 800 Wii Points ($8), which is rather steep for a game you can finish in an afternoon, but this is one of those games with enough to it to keep you coming back. 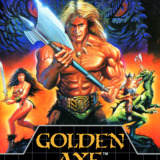