New abilities and branching paths are weighed down by stiff controls and a lack of character, which leaves the mediocre Golden Axe III a sad shell of the original.

The Wii Virtual Console has started offering games that weren't readily available in North America, which means that less import-savvy players in this region can now finally experience these games. However, some of these selections amount to little more than curiosities and fan service, which perhaps shows why they weren't widely released over here. Golden Axe III, originally available in North America only through the Sega Channel download service, falls into the latter category, with clunky controls and an absence of the key qualities that made the original so memorable.

Golden Axe III is similar to the previous two entries in the series. You choose one out of a set of different characters and go about ridding a medieval land of some impending evil. Each of the four characters has a different move set and different attributes for speed, range, attack power, and magical prowess. You slash through enemies and toss screen-clearing magic spells their way, and the whole affair is reminiscent of a Final Fight set in the Middle Ages.

The problem is that Golden Axe III doesn't control as well as Final Fight or even previous entries in the Golden Axe series. The game is playable, but moving your character around feels clunky and rigid, and it doesn't play nearly as smoothly or responsively as other games of this ilk. Attacking feels robotic due partly to poor visual feedback, and specifically a lack of sprite animation. Very few frames are used to define attacks and subsequent reactions, and put together, they feel inexplicably out of sync and sloppy.

There are new moves to mess around with, but they end up as missed opportunities due to the awkward controls. You can control when to grab and throw enemies, but it isn't always apparent when you need to press the buttons to do this. You can block oncoming attacks, but to do this you simultaneously press the attack button and the opposite direction from which you're facing. When you're surrounded by enemies and trying to turn and attack quickly, you may instead end up blocking in the wrong direction. There are new special moves that can be pulled off with several button combinations--for instance, the female warrior throws her sword across the screen--but they don't handle all that well due to the stiff controls.

The presentation drowns out the character that the series once had. In the original, you adventured across the backs of a giant turtle and a giant eagle, while battling larger-than-life barbarians and knights. In Golden Axe III, all we get is a battle atop a giant, lifeless crab--or what might be one; with the scene rendered in drab colors, it's not even apparent that those are its pincers in the background. Other backgrounds look as if they've been haphazardly speckled. As far as sprites go, the broad, vibrant coloring from games past is simply gone. Sprites are now grainy, and "giant" enemies aren't as intimidating because they're smaller overall. The music has been reduced to tinny, dry tunes that fail to draw attention, and some sound effects are so garbled that they sound almost flatulent. The only sense of panache in this game comes from the magic spells. Sweeping tornadoes and blazing firestorms pelt the screen with special effects that recall the series' nostalgic sense of fascination--or what's left of it.

Truth be told, if you can get past the controls and the lifeless presentation, the same core arcade action is there for the taking. At that point you'll find the smorgasbord of fun moves to play around with, and if you can rope a friend into playing this, there are some neat two-player joint physical and magical attacks. These attacks are simple to pull off, and each different combination of characters yields different joint move sets. More replay value comes in the form of branching paths scattered throughout, with specific routes that lead to a second, "good" ending.

Ultimately, what it boils down to with Golden Axe III is that the series' gameplay hasn't aged very well. Whereas the first Golden Axe gets by on nostalgia, charm, and a good control scheme, this final entry feels empty in comparison, and is strictly mediocre on its own merits. The new moves are nice, and efforts to extend the game's replay value won't go unnoticed, but in the end this is little more than gluing gems on top of an empty box. If you're a Golden Axe nut and you absolutely need every game in the series, spending 800 Wii points on Golden Axe III won't leave you furious. The rest of you might weep a little inside. 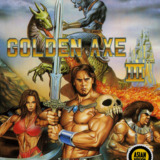