Godzilla: Save the Earth Review

Hardcore Godzilla fans will appreciate seeing the decent renderings of some of their favorite monsters here, but they're unlikely to be terribly impressed by the action itself.

The world's greatest movie monster and his numerous, gigantic enemies are back in Godzilla: Save the Earth, sort of a sequel to 2002's Godzilla: Destroy All Monsters Melee for the GameCube. The new game, available only for the PS2 and Xbox, features nearly 20 different, recognizable monsters, as well as what seems like a wide variety of modes of play, including an online one. However, at its core, Godzilla: Save the Earth is still a rather clunky, unfulfilling fighting game whose cast of characters is by far the best thing it has going for it. Hardcore Godzilla fans will appreciate seeing the decent renderings of some of their favorite monsters here, but they're unlikely to be terribly impressed by the action itself.

The main menu of Godzilla: Save the Earth is littered with options. You'll find action mode, versus mode, melee mode, survival mode, challenges, multiplayer, two different galleries (one exclusively for the latest movie, Godzilla: Final Wars), and a purchase mode in which you can spend points earned while playing to unlock additional monsters, cities, gallery art, and more. This seems like more variety than it really is, because, for the most part, the gameplay itself is pretty similar in all these modes. There are just some slight changes to the rules, such as how versus mode is a one-on-one affair where the last monster standing wins, while melee mode supports up to four players in a chaotic free-for-all scoring contest. Those who played Destroy All Monsters Melee will immediately recognize that game's stuttering, choppy, rather sluggish feel in this game's action. Destroy All Monsters wasn't great back in 2002, and its basic gameplay hasn't aged or carried over well here.

Even so, Godzilla: Save the Earth can be fun for a while. Each of the game's monsters has a fairly small selection of moves, including various punches, kicks, and other attacks involving tails, horns, beams, spikes, and other weapons. By and large, the characters play quite similarly, as almost each one will rely on its basic moves, beam attacks, and throws to inflict damage on others. However, each monster does have certain unique traits, which include resistances and vulnerabilities to certain types of attacks. This presumably gives the game some depth, but since the resistances and vulnerabilities are so specific (there are something like 10 different damage types in the game), in practice, the whole system is easily forgotten and ignored. Instead, you'll be focused on waling on your opponent (or opponents) while also steering clear of any pests in the vicinity, such as human military forces and their pathetic tanks and things.

As in Destroy All Monsters Melee, you'll also want to keep an eye out for certain power-ups in each battlefield that can either restore your health or energy or put you into "rage mode," making you stronger and capable of unleashing your strongest attack. Also like in the previous game, your computer-controlled opponents (at the medium or hard difficulty settings) have an uncanny knack for making a beeline toward offscreen power-ups, as if the life of a giant monster weren't hard enough as it is.

One other power-up causes Battra to appear and begin bombarding the enemy from the skies, which effectively replaces the Mothra air strike from the last game. This is fine, however, because Mothra is now a playable character. He's a relatively interesting one, since he starts off in his larval form but can metamorphose into his moth form during battle. The other highlight of the new additions to the character roster is Jet Jaguar, a humanoid robot who resembles the better-known Ultraman. His main special ability lets him become gigantic or tiny in a split second. The other pretty impressive cast members include two versions of Godzilla, the telekinetically gifted SpaceGodzilla (according to the manual, "SpaceGodzilla grabs buildings and opponents with his mind, rather than his arms"), the cool-looking Destroyah, the beetlelike Megalon, three-headed Ghidora and the souped-up Mecha-King Ghidoran, the fast-flying Rodan, and a couple of different missile-spewing Mecha-Godzilla versions.

Again, though, it's unfortunate that the members of this illustrious lineup don't get to duke it out in the context of a faster-paced, harder-hitting game. They can all pick up small buildings, boats, airplanes, and other things to use as projectiles, and they can all smash buildings and cause other types of collateral damage with their various attacks. However, this often doesn't look particularly convincing or on the monster-sized scale that you'd probably hope for. Granted, Godzilla's movies aren't all state-of-the-art in terms of their special effects...at least certainly not by today's standards. Even so, a video game like this is the perfect place for Godzilla to strut his stuff, but he and his foes don't come across seeming particularly powerful here. Sure, they'll knock one another high into the air, and they'll send one another sprawling to the turf, but most of the different moves in this game just don't feel like they pack much of a wallop. The exceptions are the various monsters' beam attacks, which do look pretty damaging. It's also possible for two monsters to lock beams together in sort of a nuclear-powered tug-of-war that makes for some of the game's sporadically exciting moments.

As mentioned, Godzilla: Save the Earth allows you to take your business online for a few basic modes of play for up to four players, and you can throw in computer opponents to fill out the match. If you can connect, that is. With the PS2 version, we found barely anyone playing online several days after the game's release, and couldn't actually get into an online match even when we did find an opponent--we experienced this both from an office T1 line as well as a home DSL connection. We successfully got into some sessions on the Xbox, but the results were predictably mixed. Since the fundamentals of combat aren't all that much fun, the appeal of playing this game online is rather limited. You're much more likely to be entertained by playing against your other Godzilla-loving friends in the same room.

In addition to online play, Godzilla: Save the Earth introduces a smattering of "challenges," which are little single-player minigames that, for the most part, are much more irritating than the basic action. Most of them are timed challenges requiring you to do such things as sink battleships by throwing stuff at them, shoot hoops in a makeshift basketball game, prevent the destruction of a spitting image of San Francisco's Transamerica Pyramid by destroying UFOs that are zapping it, and more. There's nothing wrong with throwing in a little variety, but the first-person shooter-style control scheme used for most of the challenges is awkward, so the time spent making these challenges might have been better applied toward tightening up the game's underlying combat system. Some of these might have been more enjoyable when played with human opponents, but probably not by much.

Godzilla: Save the Earth's lackluster presentation doesn't help its case. The graphics border on mediocrity and are OK at best, thanks to the faithfully rendered monsters. However, the game's frame rate chugs along inconsistently, the various attack animations are unconvincing, and damage to the game's environments doesn't look great, either. The game does have its moments when everything looks just about right, but these moments aren't frequent. As expected, the Xbox version looks sharper and cleaner than the PS2 version, but this partly just brings out some of the other inadequacies in the graphical presentation. As for the audio, it at least includes the signature roars of each of the monsters, but the rest of it is pretty bland. Furthermore, the game's music is barely audible.

The nuclear-powered lizard's had it pretty tough in the world of video games. Godzilla celebrates his 50th anniversary this year, and games based on his city-stomping, monster-crunching exploits have been around for the last couple of decades of that time. This particular game at least features a large, diverse cast of playable monsters (though most of them are initially locked away). However, it lacks the dramatic look and full-scale action that's made its namesake a cinematic icon. Godzilla's most ardent fans will be able to forgive some of this game's faults, but anyone else might as well give it a pass. 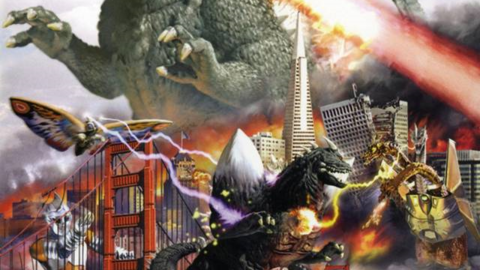 Godzilla: Save the Earth

Hardcore Godzilla fans will appreciate seeing the decent renderings of some of their favorite monsters here, but they're unlikely to be terribly impressed by the action itself.