Gods Will Be Watching Review

Gods Will Be Watching makes you question your role as a spacefaring hero. You are goaded into thinking that you can accomplish each of the game's challenges with grace. But things are never quite that easy. The choices defined as good or bad are not so easy to make; hard decisions can come with a great cost, and sometimes sacrificing a few is not only inevitable, but necessary for the sake of many. Though the game provides excellent challenge and unforgettable emotional moments, highly randomized levels and irritating glitches ultimately diminish the emotional impact Gods Will Be Watching so desperately tries to impart.

The game leans heavily on sci-fi cliches to tell its story. The plot involves government corruption, slavery, and an interstellar terrorist group that can be stopped only by a legendary military hero, worn down by years of service. Though it felt familiar, I found myself taken in by the story, especially with the scenes that emphasize the inner turmoil of the game's enigmatic protagonist, who questions his purpose in the universe. The rare yet wonderful moments of human emotion that occasionally popped up were not expected, and won't soon be forgotten. But despite the interesting story, the game's primary focus is not on its narrative. At its core, Gods Will Be Watching is a resource manager, where the fates of many lives are in your hands.

Across most of its six chapters, the point-and-click puzzler places you in a room with a group of people and a set of tasks to complete in order to reach a certain goal before the end of a timer. The timer varies, ranging from a typical countdown to the setting of the sun in a passing day. You are given a set number of actions before the timer moves ahead. The available actions are separated into color-coded tasks of green and red, and it's important to note the difference between the two. Green tasks allow you to assess a situation by asking characters questions on how to approach a puzzle, or by checking in on everyone's mental status. Such queries can be made without passing any time.

Red tasks are the actions you perform to advance in the completion of the puzzle. They can range from rotating members of a dig team clearing a blocked exit in one scene, to writing a motivational speech to boost team morale in another. Performing a red task, however, comes with a caveat: with every move, you burn away precious time from the meter. If you fail to reach your goal before the clock hits zero, you must restart the mission.

The game has strict rules for how many actions you can perform at a given time, and if you're not observant, it's easy to make a mistake that could cost you dearly. In the early stages, I found myself perplexed that the game prevented me from accomplishing more tasks in a given time. In one mission, I was charged with keeping my team alive in a harsh, frozen environment. It seemed straightforward; however, I once forgot to put wood on the fire because I was busy crafting sharpened spears for hunting food, as well as focusing on repairing a busted radio necessary for calling in a rescue. I only noticed the innocent mistake just as the sun set on the distant, mountain-peaked horizon, and by then it was too late. The game informed me that my team had frozen to death, and I had to try again.

Success in Gods Will Be Watching requires a lot of trial and error, as well as many restarts. But though the missions are challenging, they rarely feel unfair. Most failures come from negligence, such as in the aforementioned example, or by pushing things beyond a breaking point. To elaborate, your first mission has you keeping four hostages in line while impeding a group of officers as you download data from a computer. Threatening or hurting the hostages keeps them from getting any clever ideas, but too much pressure causes a revolt, and you lose your leverage. On the other hand, too much leniency encourages them to fight back, and once more you end up with a major problem on your hands. Gods Will Be Watching is a game that challenges you with an abundance of difficult problems, many of which prey on your morals.

It's fitting that the lead character is named Burden, because he faces moral dilemmas that would weigh on the shoulders of even the most stalwart individuals. The line separating right and wrong is often blurred in Gods Will Be Watching. Eschewing traditional choice systems where you can pursue a clearly defined good or evil path, the game often presents situations where the right choice doesn't always produce a good outcome, and sometimes survival means making sacrifices.

One chapter has you trapped in a cave sealed by debris, where you must produce an antidote to a deadly virus--which has infected the whole team--within a time limit. You must use a small team of scientists to concoct an antidote out of a mix of different compounds. But with no one else around, you have to use your team as test subjects for this possible cure. You can inject a weak dosage into a character, which allows you to move toward finding a cure at a leisurely pace. But as the clock counts down, you face the reality that you will progress at a faster pace if you use more lethal dosages. So, what should you do? Should you endanger the lives of your teammates with a possibly deadly antidote, or risk losing everything if you don't? The situations are stark and brutal, and rarely offer easy choices.

Gods Will Be Watching is defined by sentimental moments cleverly designed to foster emotional attachments to some characters, which in turn informs how you approach missions. One particular moment that stuck in my mind occurred during a chapter that consisted entirely of a torture scene--yes, the whole chapter. Between moments where I witnessed knees being hammered and teeth being ripped from jaws as I uncomfortably squirmed in my seat, there existed moments where the two characters, Burden and his friend and fellow soldier Jack, sat alone tied to their chairs.

Tortured during the day, the men used the time at night to raise their spirits; Burden recited encouraging speeches, while Jack reminisced about the simple pleasures of life outside of war, going so far as to jokingly talk about leaving it all behind to become a farmer. It was the kind of dark humor that only two people who have known each other for a long time, through many desperate situations, can share. The following day, I found myself less willing to make Jack take the brunt of the torturer's anger. I wanted to try to see Jack and Burden through the ordeal, because while the dream of a peaceful life was laughed about, it was still a dream worth holding onto.

The game is designed with minimalistic but colorful aesthetics, and developer Deconstructeam created some rather brilliant ways for the visuals to convey emotion. Not long after that dreaded torture scene, you are presented with a gorgeous purple sunset that washes away the gruesome memories of pliers and steel grates caked with blood. The many detailed animations are just as fantastic. In one moment, the crack of a rifle causes a room of hostages to flinch in shock, perhaps causing the prisoners to grab their knees and hold them close to their chests. Emotional nuances can also be incredibly subtle. The movement of one pixel, representing the tapping foot of a torturer as he seeks out a "negotiation" tool on a wall of deadly instruments, somehow creates far more anxiety than the devices themselves.

At its core, Gods Will Be Watching is a resource manager, where the fates of many lives are in your hands.

Gods Will Be Watching is not without its problems, some of which are serious. One of the more unfortunate issues lies with story continuity. In many chapters, not all characters make it out alive, depending on your actions. However, the narrative doesn't mark that against you because you quickly discover that the dead characters continue along with the story, despite their previously deceased nature. Naturally, I was confused at first. I half expected the game to explain how they were clones. But no, they just came back to life with no immediate explanation. It does make some sense, since subsequent levels would be impossible without a full team. Still, their resurrection removes the impact of their deaths, and by the fourth chapter, I found myself no longer caring for their safety as I once had. The game does go so far as to offer a possible explanation behind their inferred immortality, but by then, it no longer mattered.

During its second half, Gods Will Be Watching begins to fall apart. Glitches crop up in swarms, causing the game to crash to desktop or characters to get stuck in various objects, forcing you to restart the level. Even worse than the glitches are the two chapters late in the story that replace the challenging puzzle mechanics with completely randomized situations.

The most damning example is the fifth chapter, where you must guide a small platoon of soldiers to their base camp while attempting to survive a scorching, nightless desert. You are given only vague directions to the camp, and getting there is a nightmare. You don't know what lies ahead of the group. It could be a stretch of desert, or an enemy camp that you have to either circumvent or attack with your limited stock of ammunition. You can send scouts ahead, but it takes time, and there's a chance they could disappear. More than once I had almost reached the base, but either a wall would appear ahead of me or I'd end up surrounded by enemy bases and my ammo had run dry a while back. The mission was infuriating, and it soured my experience with the game; I impatiently flew through the final missions, driven by the desire to leave the fury behind me.

At its best, Gods Will Be Watching is brimming with challenging puzzles and an emotionally charged story starring memorable characters. The game is hard, but that immense difficulty makes surviving to the next chapter all the more satisfying. It's unfortunate that many of those enjoyable moments are overshadowed by glitches and frustrating randomized levels late in the game. Gods Will Be Watching was close to being a must-have puzzler, but it's doubtful that even the gods would have the patience to see it through to the bitter end.

View Comments (40)
Back To Top
6
Fair
About GameSpot Reviews 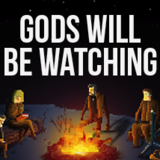 Cameron Woolsey enjoyed the majority of Gods Will Be Watching, but he would walk over hot coals before playing through its desert mission again. For the purpose of this review, Cameron played around 18 hours, gaining a few more gray hairs in the process.