Although it feels a bit like God of War: Lite, Chains of Olympus delivers a great, combat-heavy adventure with excellent production values.

Ever since its existence was first hinted at on the back of God of War II's game manual, God of War: Chains of Olympus has been one of the most anticipated games for the PlayStation Portable. Now that the wait is finally over, the question is: Does it deliver? The answer is "yes" almost across the board. The combat, level design, gore, sex, and mythology are all here--albeit in slightly stripped-down form.

God of War: Chains of Olympus' story takes place before the first God of War game on the PlayStation 2, which is a little confusing because you find yourself trying to remember just what had and hadn't happened in Kratos' twisted life at the time of the first game. At this particular point in the God of War timeline, Kratos is a general whose sole purpose is to serve the gods of Olympus. During the course of Chains of Olympus, the gods' orders create a certain moral dilemma for Kratos, and he finds himself faced with the decision of whether or not to do the bidding of his gods or do what is best for him. The story doesn't play a prominent role here, but this is God of War, so all you really need to know is why Kratos is pissed off so you can go off and slaughter mythical creatures with reckless abandon.

With few exceptions, the combat in Chains of Olympus is just as you've come to know and love. The controls are tight and in general quite good. Learning to evade attacks requires a bit of an adjustment, given that you need to hold both of the shoulder buttons and then move the analog stick, but you get used to it and it works fine. Kratos can make light and heavy attacks using his blades of chaos, and you can perform combos by pressing specific, simple button patterns. Eventually you'll get your hands on a second weapon, the Gauntlet of Zeus, which is essentially a giant glove that Kratos can use to pummel his foes. It's a great addition to Kratos' armament and a ton of fun to use. It's just too bad that it's the only alternate weapon in the game. Magic is a bit limited as well, but you'll eventually acquire a few other abilities. Most useful to us was the first one you get, the efreet, which damaged all nearby enemies; the other abilities were of little use. For every successful kill, you're rewarded with red orbs that can be used to learn new attacks as well as upgrade weapons and magic. Once again you can find hidden treasure chests that contain red orbs, as well as others that offer gorgon eyes and phoenix feathers. If you collect enough of them, you can increase your overall health and magic meters. Treasure chests and red orbs are actually quite easy to come by, so you should have no problem maxing out all of Kratos' abilities before the end of the game.

As soon as the opening cutscene ends, you're thrown right into the middle of an epic battle in which you must defend Attica from the Persian Army and a basilisk, a huge, reptilian beast that the Persian forces unleashed on the city. During the course of the game you'll fight your way through Attica, some enormous caves, and eventually Hades. Each level is linear, though there are a few branching paths that can be explored to find bonus items. Chains of Olympus is much more combat-oriented than God of War II. You sometimes have to manipulate statues and other items to reflect light or activate a pressure switch to open doors, and you'll find yourself doing a bit of platforming and swimming, but most often you're on good old terra firma while battling foot soldiers, sirens, medusas, cyclopes, and other mythical creatures so that you can open a door or break through a magical barrier to get to the next area. The heavier focus on action certainly keeps things moving, and the combat is as awesome as ever, but the occasional bit of puzzle-solving and high-wire acrobatics is missed here.

Of course, there are several extras available once you finish the game. You'll unlock concept art along with one bonus costume and video by finishing the game on the default difficulty. You can also go back and play through on the ultrahard god mode or try to complete the five tasks in the challenge of Hades, each of which quickly reveals the reason behind its name.

Chains of Olympus delivers almost everything you'd want from a God of War game on the PSP. It's reasonable to expect a few concessions when a series transitions from a console to a handheld, Chains of Olympus does make a few that are worth noting. The biggest issue the game has is that it does almost nothing new. Even the played-out sex minigame is back for another tryst. Granted, it's the same formula fans of the series have come to know and love, but it would have been nice for at least a few new gameplay ideas to be introduced. Instead, the game goes the other way and actually feels a little stripped-down in parts; there are fewer weapons, levels, and boss fights, though there are still plenty of quick button-pressing minigames--perhaps a few too many.

It's also rather short. As far as we can tell, we collected all but one of the hidden chests and still saw the ending credits in less than seven hours. You're left wanting more because the game is a blast, but it's still over far too quickly. One thing the developer didn't compromise is load times. Most areas stream instantaneously, and there are probably less than 60 seconds out of the entire game in which you're waiting for the next area to load.

Few PSP games can match Chains of Olympus from a visual standpoint, either technically or artistically. Simply maintaining a solid frame rate is impressive enough when you've got so many characters fighting onscreen at the same time, but when you toss in lighting and particle effects, moving backgrounds, and lots of blood, it's even more impressive. The cutscenes alternate between prerendered full-motion video, in-game engine, and concept art brought to life by a bit of animation and camera movement. All three types look fantastic. The levels are varied and expansive, but they don't quite have the same epic feel as in the previous games. This is partially because the first level is the only one that has a lot of action going on in the distance, but also because the PSP's screen is small. Likewise, Kratos is sometimes quite tiny and doesn't look particularly powerful when he's only two millimeters tall. Kratos doesn't always appear that small, though, and his movements and attacks are always nicely animated regardless of his stature. If you own a PSP slim and the proper cables, you can make the size issue irrelevant (as well as improve the brightness, which is often really dark) by playing on your television. The textures, which look just fine on the PSP, don't quite hold up on the big screen, but the rest of the game looks fantastic even when blown up several times on your TV.

Headphones are a must when playing Chains of Olympus; it sounds fantastic. T.C. Carson and Linda Hunt reprise their roles as Kratos and the narrator, respectively, and they once again deliver top-notch performances. The well-known God of War theme is also back, and the whole soundtrack fits the action perfectly. After all, it's hard not to feel like a total stud with timpani and horns bombastically urging you on.

Like Grand Theft Auto and Syphon Filter before it, God of War successfully pulls off a console experience on a handheld. Some new ideas and a better mixture of puzzles, platforming, and bosses would have been divine, but Chains of Olympus is an excellent game that delivers most of what you've been praying for--more God of War.

View Comments (15)
Back To Top
8.5
Great
About GameSpot Reviews 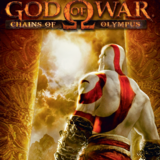