Go! Sports Ski's asking price is so low that it might seem to be worth every penny--but inconsistent controls make it barely worth a second of your time.

There's a dearth of snow sports games on the PlayStation 3, specifically skiing games. In fact, Go! Sports Ski, a small downloadable game available for the PlayStation 3 from Sony's PlayStation Network, is the only game in town at this point. Regardless, this so-called "skiing simulator" that's meant to show off the Sixaxis motion controls doesn't do enough--neither in quality nor in quantity--to fill that winter-sports void in a satisfactory manner.

In Go! Sports Ski, all of the action is controlled with Sixaxis motions. No buttons or analog sticks are ever used. You accelerate by tilting the controller forward, turn left or right by tilting it appropriately, and jump by quickly whipping it upward. For the first few seconds, it seems natural enough, but as soon as you come to your first hard turn, you'll tangle up your wrists in an effort to avoid a face full of snow. Turning up the sensitivity in the options menu will help some, but expect to still have major issues when deftly carving around tight corners and trees. Sometimes the controller will actually think you're trying to jump instead. It's not a problem that's consistently reproducible, but it seems to pop up at the most inopportune moments.

When you actually do intend to jump off of an incline, you're able to twist and turn the Sixaxis to execute some kind of stunt. Successfully landing the stunt grants you a slight speed burst, but good luck trying to tell whether or not you'll land it before you hit the snow. We've successfully landed backflips in midanimation, whereas simple spins that looked like sure things had us tumbling head over heels. Go! Sports Ski doesn't exactly deliver the physics that the Havok engine should otherwise provide, either. Miss a jump and you might find yourself sliding as if you were magnetically attached to a cliff side, with your body parallel to the earth. No Olympic skier is that superhuman.

The game at least looks somewhat decent, in that it runs at a consistently smooth frame rate and sports passable texture work. Your skier appears to be built off of a PlayStation 2 model, but with high-resolution skiing gear that helps smooth things out a bit. Don't stop to admire the mountain when you fall, though; patches of rocks, though crisp, appear to be pasted on a flat surface. The music and sound effects manage to be inoffensive but equally unmemorable.

For $2.99, you're getting three modes: battle, time attack, and slalom. You can race others online in battle, where you get trivial power-ups such as speed boosts. The online components of the other two modes merely serve to post high scores on a leaderboard. You can play against a buddy locally in split-screen. You can also save ghost data from each of these modes to race against the ghosts in single-player "practice"--but that's the only competition you'll have in single-player because there are no artificial-intelligence opponents. The super-low price may justify the sparse content for some people. The real question is whether or not the game is worth the time spent downloading it, installing it, and then fiddling with the Sixaxis. With questionable physics, wonky controls, and not a single bot to race against, the answer is "not a snowball's chance in hell." 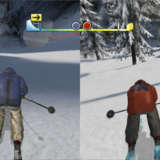