Gitaroo-Man is arguably the most original and inventive rhythm game since the advent of Dance Dance Revolution or the original Parappa the Rapper, and it's easily one of the best rhythm games for the PlayStation 2.

The rhythm game genre has always been fertile ground for a special brand of eccentric Japanese pop-culture weirdness and a very unique kind of aesthetic. While the style is still fairly fresh, the genre has been allowed to stagnate over the past few years. There have been three Parappa-related releases, though they have admittedly been getting less and less inspired with each release. Koei, a company best known for its historically oriented strategy games, enters into the rhythm game scene as an unlikely player with Gitaroo-Man, which is as a breath of fresh air in an otherwise inert genre.

Gitaroo-Man follows the story of a young elementary student named U-1, a lonely loser with no self-confidence and no friends, save for his jelly-bean-headed talking dog, Puma. U-1 comes to learn that he is the heir to the title of the legendary Gitaroo-Man, an intergalactic superhero who uses the power of his gitaroo to defend the universe against evil. An evil alien race known as the Gravillians has been going around, collecting gitaroos in a bid to take over the universe, and it would seem that U-1 and Puma are the keepers of the only gitaroo the Gravillians haven't acquired. So U-1 travels around the universe, fighting a bizarre cast of Gravillian warriors in order to reclaim these magical instruments for the planet Gitaroo. Along the way, he'll learn about believing in himself, falling in love, and the true nature of music. The story is sometimes cheesy and always strange, but it's delivered with the utmost sincerity, and it concludes with an incredibly satisfying climax.

The gameplay in Gitaroo-Man alternates between two different mechanics. At certain points, using the left analog stick--which controls a cone in the center of the screen--you'll follow a line around the screen while pressing and holding the circle button at certain moments to pull off riffs. At others, button commands will move toward a cursor at the center of the screen, at which point you'll have to press the designated face button on your controller. The whole experience is incredibly fun and challenging, as the action gets pretty fast and furious early on in the game. The level of difficulty in Gitaroo-Man has been decreased for US audiences, toning it down from impossible to simply hard. The normal difficulty will no doubt challenge well-seasoned Parappa players, though the easy difficulty is recommended for those just discovering the genre, lest you find yourself quickly frustrated with the game.

Each level is broken down into three different stages: charge, battle, and final. During the charge stage, you can fill up your health meter by successfully executing the onscreen commands. The battle stage gives you the chance to diminish your opponent's health meter with your musical stylings, though your health meter will also drop if you flub any of the commands during this stage. Once your opponent's health meter drops to a certain point, you'll enter the final stage, which usually involves a big guitar solo that you use to finish it off. Gitaroo-Man features multiplayer support for up to four players, giving each player the chance to "play" a different portion of the music as one of the game's many colorful characters. A few of the single-player songs are unavailable in the multiplayer mode, which is unfortunate, as these are some of the better songs on the soundtrack.

The visual style of Gitaroo-Man is the most immediately striking element of the game, and it rivals the style of the Parappa series in terms of originality. The game is rendered in crisp and colorful 3D, but the characters' facial features are animated with 2D textures, lending the game a kind of cartoonish quality without resorting to the overused cel-shading technique. While it looks nothing like any anime you've ever seen, the whole affair has a decidedly Japanese pop-culture feel to it. This aesthetic is reinforced by the game's environments, which are simple but vivid and create the kind of atmosphere where it would seem appropriate for a television to jump up and start dancing around. The game is teeming with nice visual touches, such as the posters on U-1's bedroom walls the animal-suited backup band that mysteriously follows him throughout the game.

Produced by the Japanese music group COIL, the soundtrack in Gitaroo-Man is second to none. Each song deftly encapsulates a different musical style, representing high-tempo J-pop, drum and bass, dub, acoustic ballads, arena rock, and many others. All the music is solid, and once you've played through the game, you'll undoubtedly want to go back to just to hear certain songs. The voice acting, while perhaps not as impressive as the soundtrack, is generally good and doesn't undermine the experience.

Gitaroo-Man is arguably the most original and inventive rhythm game since the advent of Dance Dance Revolution or the original Parappa the Rapper, and it's easily one of the best rhythm games for the PlayStation 2. This is a must-own title for rhythm-game junkies, but the whole package is so compelling that it will also appeal to anyone who isn't a fan of the genre. 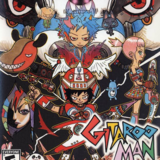 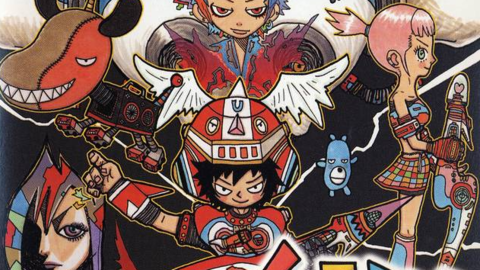 Gitaroo-Man is arguably the most original and inventive rhythm game since the advent of Dance Dance Revolution or the original Parappa the Rapper, and it's easily one of the best rhythm games for the PlayStation 2.