Gimme Five may not have enough variety to keep it interesting in the long run, but for a short-term sort of thing, it's certainly addictive.

Namco's Gimme Five is a cross between five-card draw and bingo that, despite a very fair price, seems more like a minigame than a full game in and of itself. Gimme Five may not have enough variety to keep it interesting in the long run, but for a short-term sort of thing, it's certainly addictive.

In Gimme Five, you're given five cards that are different from regular playing cards in that they differ from each other only in suit. The suits in the game range from the traditional spades, hearts, diamonds, and clubs to the not-so-traditional smiley faces and stars. You're also presented with a board of 16 spaces. Each space has a different challenge in it, such as one that requires you to get three smiley faces, or another that asks you to get a full house. After being dealt to, you have only two opportunities to remove any part of your hand and draw new cards to satisfy those challenges. If you successfully do so within the two allotted draws, you mark the challenge on the board and it cannot be completed again. Obviously, the point is to try to get the hardest ones first, if possible, so that you can cross off everything on the board. If at any point you run out of possible challenges to mark off, the game ends. If you complete the board, then you go on to a bonus round, which is just another iteration of the same board.

The concept is fun, but far too simple. It would have been much more compelling if the board had changed and gotten more difficult with each consecutive level, or if you could have won free rolls or free spaces. As it stands, you must rely entirely on chance to continue playing and try to beat your own high score. High scores are tracked and indicate how long ago each score was set, which gives you some idea of whether or not you're getting better over time, or if your high scores are all flukes. While competing against your own best can be quite satisfying, the lack of at the very least online scoreboards is quite noticeable. Multiplayer could also have been an option, and it simply isn't present.

The presentation in Gimme Five is solid, with graphics that are as good as can be expected in a game this simple. Obviously, the graphics don't show off the full capabilities of the LG VX7000, but they don't detract from the experience either. The sound is less admirable. It consists of stock sound effects that don't add to the overall atmosphere of the game.

Namco's Gimme Five is a pure and simple puzzle game that has a solid premise, although it is admittedly a little confusing from the get-go. Unfortunately, it doesn't challenge the player or vary the gameplay in any way, so it's hard to recommend playing it over an extended period of time. There are many other puzzles and card games currently on the market that pack more gameplay for the buck, and are much more addictive in the long term to boot. 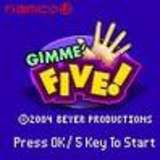