You'd be hard-pressed to find a more visually impressive shooter on the Dreamcast, and the game is highly playable to boot.

The Dreamcast is undoubtedly the system of choice for publishers bringing out shooters in the US. Similarly, Capcom seems to be the premier purveyor of shooters this side of the Pacific. Its latest release is the Takumi-developed GigaWing 2, the sequel to last year's ill-conceived CPS2-based shooter. Those who've played the original GigaWing will surely remember the game's almost maddening difficulty level and haphazardly designed challenges. These very players will probably distance themselves from the sequel due to its name alone, which is unfortunate--GigaWing 2 is considerably better than its predecessor in every conceivable way. The world is at war again, and it's up to the GigaWing squadron to save humankind from itself. A greedy rebellion has risen against the established order, and they're using innumerable ships and war machines to destroy the world. What's more, rumors of a recently unearthed ancient artifact with massive destructive powers are starting to surface. As a valiant member of the GigaWing squadron, you're to penetrate enemy territory, blow up every trace of their forces, and keep the ancient evil artifact from wreaking havoc on the world.

Just like its predecessor, GigaWing 2 is a top-down shooter designed around a now well-established game mechanic: the reflect force. Reflect force is a weapon that rebounds the shots of your enemies right back at them. As the game lays on the enemy shots rather thickly throughout its stages, intelligent use of your reflect power is of paramount importance. Mars Matrix made heavy use of a version of this feature, and both GigaWing games are basically designed around it. Thankfully, GigaWing 2 pulls it off much more gracefully than its predecessor. At the game's outset, you're allowed to choose how you want your reflect force to behave--either as a standard repulsion field or as a lock-on laser beam. In either case, you can use it to deflect enemy shots. It's what it does with those shots that varies. The repulsion field literally reflects enemy shots, while the reflect laser uses them to energize a powerful lock-on beam. Both types take a few seconds to refresh after use, but other than that, you're free to use them at will. It's tempting to say that the differences are mostly aesthetic, but they're not--one is clearly offensive and the other is defensive, and to use either is to adhere to the appropriate strategy. Aside from the reflect powers, ships are equipped with both standard shots, which increase in power as you grab power-ups, and screen-clearing smart bombs, which are accompanied by gratuitous (yet impressive) special effects.

As stated before, playing GigaWing 2 is thankfully much less frustrating than playing its predecessor. Where the first game thrust you headfirst into hopelessly bullet-laden battlefields, this current installment takes a more composed approach. While a great many sequences see the shell fire layered pretty thick, you always feel as if there's a discernable pattern to it all, or else some other hope of survival. As before, the game forces you to use your reflect power when the action gets too thick, which allows you to enjoy both a momentary breather and an offensive boost. The levels are relatively short and densely populated, and they culminate in the requisite battles with massive bosses, with midlevel bosses a common appearance. The setup is rather orthodox, truth be told, but the mechanics are well conceived. Sure, it was hard to admit after playing the first game, but the reflect force is a rather well-conceived idea, and it's good to see it finally being implemented soundly.

GigaWing's graphical presentation was definitely an unexpected treat. Because the game originated on Sega's Naomi arcade board, however, it shouldn't have come as such a huge surprise. Everything is rendered in 3D and moves very smoothly. Most of the game's elements are animated, as well--everything from the backgrounds and enemies to the players' ships and the bosses. Most impressive, however, are the game's smart-bomb effects. They're easily the most impressive effects of their kind seen in a 2D shooter, and the violent pyrotechnics they display will make your eyes melt as much as your enemies smolder. One ship's attack, for example, summons forth a multilayered twirling cone of flame from its nose, shredding both pixels and enemy aircraft. Another ship's special culminates in a set of angelic wings cutting through the hulls of enemy ships before brilliantly exploding. In all cases, the smart bombs are accompanied with all manner of impressive lighting and particle effects, and they are easily the game's most impressive visual flourishes. The game does suffer from the requisite amount of slowdown, but it's never enough to seriously hamper gameplay, save during four-player games--the game literally slow to a crawl when the action is especially thick and smart bombs are dropped.

GigaWing 2 did surprise us a great deal, given the questionable quality of its predecessor. You'd be hard-pressed to find a more visually impressive shooter on the Dreamcast, and the game is highly playable to boot. While the game is pretty short-lived--you could blow through it in a half hour, thanks to infinite continues--the four-player mode should serve as a decent diversion. 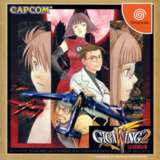