The truly unique premise, coupled with stunning graphics and exciting gameplay, makes Giants: Citizen Kabuto one of the best action games in years.

Imagine what would happen if Salvador Dali decided to design a computer game after an all-night marathon of watching cartoons, monster movies, and pro wrestling. Then you'd start to get an idea of Giants: Citizen Kabuto, one of the most wildly imaginative, funny, and enjoyable action games to date. Actually, to simply call it an action game would be to do it an injustice. While it's played from a first- or third-person perspective in the fashion of a typical shooter, the game also has resource-gathering and base-building elements that are similar to those in real-time strategy games. These elements are linked together by the game's distinctly stylish and goofy sensibility, which is immediately likeable and entertaining. While Giants does have a few problems, you'll certainly want to look past these since the game itself is so inventive and so much fun.

The game's action is set on the Island, a planetoid hurtling through space. It is covered with lush, tropical islands and brilliant azure seas and is at least a temporary home to numerous strange creatures, including the game's three playable races. These are so different that they can make Giants seem like at least three different games in one. First, there are the Meccaryns, or Meccs, who were swallowed by a giant space fish while heading to a vacation planet and then unceremoniously defecated onto the Island. They have access to a full range of traditional shooter weaponry such as machine guns, missiles, sniper rifles, grenades, and more. Meccs also have special backpacks, including a default jetpack that lets you fly short distances before having to recharge. For higher flying, there's a gyrocopter that can be piloted by one Mecc while you carry others in multiplayer mode.

Whereas the Meccs use high technology, the nymphlike Sea Reapers rely on mystical powers. Delphi, their princess, wields a sword plus various bows for long-range attacks, but her real power comes from her spells. For instance, her teleport spell not only instantly moves Delphi to another location, but it also creates stationary clones to confuse the enemy. The slow-time spell temporarily decreases the movement and attack speed of creatures caught in its sphere of influence. These are just a couple of the many imaginative Sea Reaper spells. The Sea Reapers also have a jetski vehicle, which you'll have to race around on in several misssions.

The third playable character is Kabuto, a Sea Reaper experiment gone awry, who uses his massive size as a weapon. Instead of spells or gadgets, he lashes out with pro-wrestling-style moves. Using a special adrenaline boost, Kabuto lets loose with elbow drops, foot stomps, cannonballs, and the butt flop ("like the body slam, but with less dignity," according to the game's funny manual). Kabuto can also make missile weapons out of handy objects, like boulders - or even Sea Reaper guards. In a laudably bizarre twist, Kabuto can also use a special gemstone, like a magnifying glass, to focus the sun's rays and scorch anyone in his path. Furthermore, you actually have an option to view the game from inside Kabuto's mouth or from beneath Kabuto's foot, in case you want a very close look at the carnage.

A gameplay element that sets Giants apart from other shooters is its incorporation of base-building and resource-collecting elements from real-time strategy games. There are two basic resources - Smarties and Vimps - which are two of the many indigenous life forms on the Island. Smarties are little munchkinlike fellows with oversized heads, and they act as workers; Vimps are lumbering alien cattle. The economics of these resources is different for each of the three playable races. Meccs gather Smarties to build their bases, including workshops, gift shops (armories), command centers, perimeter defenses, and so forth. They gather Vimps to feed the Smarties and keep them working. Sea Reapers surround Smarties with magical bubbles and lead them back to the sea to create their bases while gathering Vimp souls for more energy. Kabuto has no need for a base and simply eats Vimps and Smarties; the former restores health while the latter lets Kabuto lay miniature offspring that fight along with him. To save meat for when he might need a health boost later, Kabuto can skewer creatures on his horns.

Fortunately, the base building and resource collecting is subservient to the wild combat action, and it's very easy to learn and control. Unlike in many real-time strategy games, you never feel like a harried bureaucrat when playing Giants. In fact, given the perspective of the game, the base building actually seems very different than in most real-time strategy games, as you can actually walk around in your base and look through and fire remote turrets.

The single-player game is composed of separate stories of linked missions, which progress through each race. Through very funny, fully 3D animated cutscenes, you're introduced to new items and game concepts, like collecting Vimps or using advanced combat tactics like hiding in a holographic bush for stealth. Missions tend to be varied in their individual goals, and they gradually increase in scope and difficulty, typically alternating between easier and harder goals. Despite their differences, the missions largely revolve around a little exploration and a lot of combat; Giants is an action game at heart, though the action never gets old, thanks to the impressive settings and widely varied forms of attack. Giants uses some old shooter standbys like power-ups, which appear when you kill a creature; but this doesn't feel stale or out of place, since the rest of the game is so imaginative. If the single-player game does have a flaw, it's the lack of an in-mission save feature, which can quickly turn the fun into frustration since some missions can be quite hard. This can also be a problem because Giants can be rather unstable, and may unceremoniously crash your computer, forcing you to restart the mission you were in. Also, the game only has one difficulty setting. Fortunately, the single-player campaign is quite long, and many of the more elaborate missions give you access to a base, where you can stock up on health and firepower.

Another problem with the campaign in Giants is that the missions follow a strict order, so you begin playing as the Meccs, whether you like it or not. The Meccs are just as fun (and funny) as the other races. You'll often have another Mecc or two at your side as you progress through the missions, and Giants features a simple set of controls for ordering your companions about. Companion Meccs fend fairly well for themselves, though they do tend to walk in your way during combat. Enemy artificial intelligence is generally effective too, as you'll notice Sea Reaper guards running for cover when they come under attack and then trying to encircle you. But sometimes they'll stand around stupidly as a buddy next to them gets sniped.

As with the single-player game, online multiplayer in Giants is a blast (though you might also find that it suffers from some stability issues). The two basic game types are deathmatch and capture-the-Smartie (a capture-the-flag variant). You can choose to play any of the three main races, depending on the game mode, and servers can determine how much focus will be placed on base building. The different gameworlds are varied in layout and appearance to keep play fresh, and the balance between in-your-face combat and base-building strategy is superb. Unfortunately, there's no option for a skirmish against computer-controlled opponents.

Astounding graphics bring all the action in Giants to life: Giants is a visual tour de force that's practically without peer. The game is optimized to take advantage of some of the latest 3D graphics technologies, and it's easy to see why. Special chip set features such as hardware transform and lighting are supported, which help render ultradetailed scenes smoothly on midrange computers. Bump mapping lends terrain and monsters a sense of depth and roughness. Metallic sheens, as well as rippling, reflective water, are just as nicely rendered. The graphics aren't merely about technical wizardry, though: Lots of imagination clearly went into the visual design. Kabuto, something of a cross between Godzilla and King Kong, is particularly impressive, as are the Sea Reaper weapons, with their vivid energy effects. Little touches, like plumes of dust flying from the ground when they're hit with weapons fire, add to the sense of immersion. The game's ambient lighting effects are absolutely stunning. The graphics even play up the humor - for instance, the Smarties will draw a laugh from their physical appearance alone because of their bulbous, watery eyes and oversized brain-shaped heads. Smartie villages look like something out of The Flintstones or a Bugs Bunny cartoon, while other creatures' architectures really do look alien.

As with the graphics, the game's sound is excellent. Each weapon is made memorable by a distinctive and vivid effect, like the whoosh of the Mecc's rocket launcher. The odd and often menacing indigenous life forms of the Island are equally well represented. For instance, you can hear the ground rumble as the thorny, fanged Rippers burrow toward you, kicking up dirt and gravel. One of the best uses of sound in Giants is the rich ambient effects that help set the scene. You'll hear waves lapping against the shore, as well as birds and alien creatures screeching from within distant jungles. A top-quality full orchestral score helps bring these alien landscapes to life, too, and it alters the mood to suit the game's action. If the score has a weakness, it's only the discrepancy between its seriousness and the zaniness of much of the game. Regardless, it's beautiful to listen to. The game's voice acting varies in quality, with Meccs and Smarties portrayed with cockney or Scottish accents, which can be pretty funny because of the incongruity. Kabuto's earthshaking roars are another memorable highlight.

Giants is bizarre and funny without ever letting the silliness distract or annoy the player. Some of the jokes and dialogue do sometimes fall flat, but that's a small price to pay for a game that's generally so innovative and entertaining. Giants plays very differently, depending on which of the three races you're controlling, and this adds a lot of replay value to the campaign that would otherwise be missing because of the lack of single-player difficulty settings or a skirmish mode. Ultimately, the truly unique premise, coupled with stunning graphics and exciting gameplay, makes Giants: Citizen Kabuto one of the best action games in years. 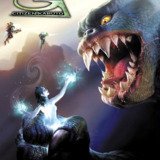