A few bright spots prove that this clumsy, unsatisfying film tie-in could have been much better.

Have you ever conversed with someone who just went on and on about some dumb thing or another that you couldn't care less about? You know, the droning, talkative bore who makes you want to say, "Will you just shut up already?" G.I. Joe: The Rise of Cobra's story is the game equivalent of that same party pooper, interrupting the action so often with poorly written dialogue snippets that you can't get into a rhythm. The battles in this top-down shooter aren't anything special, but the gunplay has a simplicity that will initially appeal to fans of games like Commando and Ikari Warriors. It's too bad that Rise of Cobra so often puts the brakes on its own forward momentum by pointlessly pausing the action over and over again with story exposition outlined by hideous digitized portraits of the G.I. Joe film's stars.

Before each mission in The Rise of Cobra, you choose one of six Joes and then proceed to clear jungles, deserts, and snowdrifts of the Cobra terrorists that stand between you and finishing the game. The Joes' attacks vary, but as a rule, you'll go in with a standard ranged weapon, a supply of grenades or other explosives, and a limited-use special attack, such as Heavy Duty's burst fire. Then, you proceed to run around blowing stuff up using only the D pad and face buttons. It doesn't feel as slick as it should: You can't move and fire simultaneously, and the limited eight-way shooting afforded by the D pad may make you long for the smoothness of a touch-based scheme (the system's touch capabilities go unexplored). Yet when the action is given room to breathe, The Rise of Cobra is fun in the way that many top-down shooters are fun. You mow down legions of baddies, fight against a few interesting bosses, and even wreak havoc in the occasional tank. It isn't bullet hell, but the missions do have some amusing and challenging moments that are enjoyable to tackle.

The missions also have some maddening moments. Every enemy and object has a layer of invisible padding surrounding it, and you'll sometimes face sizable numbers of enemies in cluttered spaces. This weird collision detection makes it easy to get hung up on buildings, girders, walls, and other enemies, and your attempts to tumble away from your foes are often hindered by unseen cushions of air. These cushions seem to exist to provide room for taking cover using The Rise of Cobra's useless automated cover system, which allows you to hide behind certain objects and take less damage. The cover mechanic feels clunky and imprecise, however, so rather than enhance the gameplay, it just gets in the way. It's better to give objects a wide berth and stick to running and gunning, which becomes monotonous but is mechanically sound.

Then there are the endless story snippets. You'll be gunning along happily for 30 seconds, only to have the action halt and a bunch of silly expository dialogue appear on the touch screen, along with unsightly representations of the actors in the G.I. Joe movie. The plain, charmless visuals and clumsy animations don't take advantage of the hardware's capabilities as it is, but these relentless breaks are doubly difficult to look at. It makes the single-player campaign choppy and inelegant; after a while it's hard not to let out a groan every time there's a pause. There are times when the story doesn't cause the action to stop, but the dialogue frustratingly covers up the minimap on the lower screen and sometimes appears in the middle of battle, which means you'll be too occupied to read the dialogue anyway. The story isn't great on its own, and the poor manner in which it's told is disruptive.

If you stick to The Rise of Cobra's limited but likable local multiplayer options, you'll be able to leave the stumbling narrative behind and concentrate on the action. It's unfortunate that every player needs his or her own copy of the game, but if you have three friends with cartridges, you'll find a simple but amusing team-focused experience in here. The mechanical issues with cover and collision detection are still present, but the multiplayer levels are less cluttered, and thus those flaws are less of an issue. There are three modes in all, but you should ignore the lackluster Team Battle mode and jump into either the Warhead or Defend the Base modes. Warhead is a capture-the-flag variant that requires the player returning the warhead to the opposing base to remain in place for a number of seconds until the base explodes. This extra vulnerability is a nice twist that keeps the attention focused directly on the warhead carrier. Defend the Base is also enjoyable and requires one of the two-man teams to destroy a series of objects while the defending team protects them. The mode is entertaining, though it's hard to tell how close you are to demolishing these objects due to inadequate visual feedback. We also experienced moments of slight but noticeable lag in every match we played.

If you don't have any friends with copies of the game, you'll have to stick to G.I. Joe: The Rise of Cobra's inconsistent, poorly paced campaign. The core action is based on a proven formula, so it works when the rest of the design gives it the chance. Unfortunately, the additions to this formula--copious written dialogue and an unnecessary cover system--drag the game down. That's too bad, because this film tie-in's potential was greater than the seemingly rushed product that landed on retail shelves. 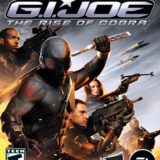