Ghosts 'n Goblins Resurrection is an honest, faithful homage to a series known for being so difficult, it's nearly unplayable.

Capcom's Ghost 'n Goblins franchise has a very specific reputation. Whether you played the Arcade or NES version of Ghosts 'n Goblins, Ghouls 'n Ghosts on the Genesis, or Super Ghouls 'n Ghosts on the SNES, working through these games felt like pushing a boulder up a mountain or pulling teeth. A little over 35 years later, Ghosts 'n Goblins Resurrection remixes and revives those games into a platformer that looks new but, perhaps unsurprisingly, embodies that same boulder-pushing, teeth-pulling gameplay. Its modern flourishes soften the blow a bit from time to time, but Resurrection is still defined by punishing, borderline cruel tactics that game designers have long-since outgrown.

Ghosts 'n Goblins Resurrection is a new game, but it functionally retells the Ghosts 'n Goblins story. The basic mechanical structure of the series remains intact, too: You run and jump from left to right, throwing javelins, knives, flaming potions, and other weapons at a seemingly endless onslaught of zombies, scythe-wielding skeletons, and winged demons. Famously, you begin the level clad in armor but lose some of it every time you take a hit until you're inevitably hopping around in heart-adorned boxers.

Resurrection derives large chunks--level themes, sequences, and bosses--from previous games, most notably Ghouls 'n Ghosts. Some of the series' distinctive bosses and sequences are reimagined in Resurrection's pencil-style art, which smartly breathes a lot more color and whimsy into a series that's always felt more cheeky than spooky. Not every reference to the old games is pulled literally from an older game; some, like the now-towering gray cyclops from Ghosts 'n Goblins, are more liberal reinterpretations. Even the enemies and sequences you can trace back to a specific point in a previous game are not identical to their predecessors, and it doesn't feel like replaying a portion of another game, but it's a potent dose of nostalgia.

Since Resurrection so closely resembles the 8-bit- and 16-bit-era games to which it pays homage, it retains all of the controls and design characteristics that cultivated the series' original, frustrating reputation. In a modern context, the series' building blocks do not stand the test of time. Combining sluggish controls and unpredictable, sometimes unknowable, enemy attack patterns, the controls and level design feel as if they were designed to frustrate rather than challenge.

Your running movement is slow--you can't outrun enemies--so your jump is your primary movement. Jumping always feels risky in GnG: You have no air control, and it follows an uncanny arc that's never exactly the distance you want to go. Meanwhile, the levels take advantage of that limited range of motion. Platforms are spaced apart in such a way that you're likely to jump over them or land right on the edge, teeing you up for an enemy to hit you and knock you into a pit. The waves of zombies and monsters, already plentiful, get to take some cheap shots at you, appearing underneath your feet with little warning and attacking from off-screen. And again, even with plenty of notice, you're not nimble. You will be caught off-guard. It's a perfect storm of unpleasant platforming feel and ruthless level design. Set up for failure, the fun falls away and only rage remains.

Resurrection adds a few new features that make some aspects easier and more approachable, though they do not go nearly far enough. There are four difficulty levels, including a quasi-no-fail mode. If you die repeatedly, you can also temporarily lower the difficulty for the duration of a level or turn on a setting called the "magic metronome," which slows the entire game down. The curve is ultimately too shallow, though. Even on Squire, the lowest of the standard difficulties, you still need to memorize enemy movement patterns for long sequences and land pixel-perfect jumps by the end. Plus, the inherent difficulty created by the sluggish controls is not so easily scaled back.

There's also a new magic system, which adds screen-clearing attacks like turning enemies into frogs and shooting bolts of lightning out above, below, left, and right. While helpful and abundant--it's only limited by a short cooldown--the magic system never gives you the breather you need when you're overwhelmed. Enemies are so abundant that even a well-timed spell only grants a few seconds of relief and certainly won't allow you to advance much. Plus, mistimed spells will get you killed. Magic needs to be charged, and that few seconds of not throwing your weapon gives enemies more than enough time to pummel you.

Occasionally, Resurrection does find a good balance between staying faithful to its infuriating heritage and drawing you in. The original Ghosts 'n Goblins games are infamous for their bait-and-switch ending: When you reach the final boss, you're told to replay the beginning and play the game again before fighting them. Resurrection softens that blow; you're given the satisfaction of an ending before getting thrown back to the level-select screen, and when you replay the game, there are more difficult "shadow" levels to make the second leg of the journey feel fresh. That said, the difficulty is already staggering the first time around, that the prospect of an even harder version may simply stop you in your tracks.

Of course, every moment of Ghosts 'n Goblins Resurrection feels like it could be someone's breaking point. That's the series' legacy: the feeling it champions. If you have a strong nostalgia for these games and whatever feelings they inspired in you, it is a faithful homage. And Capcom deserves credit, to a point, for recreating a game that can stand shoulder to shoulder with Ghosts 'n Goblins, and Ghouls 'n Ghosts, as peers in excruciating gameplay. As entertainment, though, it is an artifact of a time long-past that I'm happy to remember, rather than return to.

View Comments (128)
Back To Top
4
Poor
About GameSpot Reviews 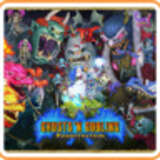 Mike Epstein screamed, cried, and yelled at his TV while playing Ghosts 'n Goblins Resurrection for about 10 hours. If he weren't trapped at home because of the pandemic, he'd be on a beach right now drinking a pina colada, decompressing and nursing his bruised ego. Switch review code was provided by the publisher.