Despite some drawbacks, this satisfying adventure is just what you'd want from a Ghostbusters game: it's funny and it's fun.

It's good. If you're a fan of Ghostbusters (and maybe even Ghostbusters 2), that's all you needed to know, so you can go out and grab your copy without worrying that you'll have to tread through bad game mechanics just to get a few good laughs. If for some reason you're a newcomer to the franchise, that's OK too. Ghostbusters The Video Game is a humorous and amusing third-person action-adventure with some clever mechanics and loads of personality. It's not all pleasurable, due to some tedious mechanics and other issues, but if what's most important to you is some lighthearted fun, then you'll find enough in this package to keep a smile on your face.

No shocker here, but Ghostbusters The Video Game is funny. The script was penned by original film scribes Harold Ramis and Dan Aykroyd, and while it doesn't quite reach the heights of the 1984 comedy classic, it rides the film's coattails quite comfortably. It's 1991, and you play an unnamed rookie joining the ghostbusting team, the members of which are voiced amiably by the stars of the movies: Dan Aykroyd, Bill Murray, Harold Ramis, and Ernie Hudson. There are some moments when the performances sound phoned in (Bill Murray sounds a bit too sleepy even for Bill Murray), but there's no doubting that these are the same characters that delighted us in the '80s. Sigourney Weaver and Rick Moranis don't reprise their roles, but you'll hardly miss them as the plot careens forward, reuniting you with old spectral friends and propelling you through a pleasant variety of earthly and otherworldly locales. Not every joke soars, but you'll find it difficult to stop grinning, and you'll probably let out a few guffaws from time to time. Venkman's laconic womanizing, Egon's deadpan pseudoscientific explanations--there's wit here for fans and newcomers alike.

Thus begins a journey through museums, libraries, cemeteries, and even alternate dimensions. As you get to the bottom of the evil powers behind the increasing paranormal activity in and around New York City, you and the AI-controlled 'busters explore a surprising variety of environments and face off against a lot of interesting and creepy apparitions. You'll recognize a few of them, such as the Stay Puft Marshmallow Man, though your final face-off against this returning monstrosity is a disappointing letdown. Thankfully, you'll meet plenty of new, fascinating meanies and either grapple them into traps using your proton pack or simply vanquish them completely. The pack has four modes, but you'll use the default mode most frequently; not only does it emit a capture stream that lets you grab onto weakened ghosts and wrestle them into traps, but it emits a nice strong blast of energy called a boson dart, which is handy for weakening a number of different enemies. A second mode grants you a shock blast (think shotgun) and a stasis stream that slows some enemies down, while a third, the meson collider, lets you shoot a homing beacon onto enemies and then blast them with rapid-fire beams. A fourth mode is the second-most handy one; its primary firing mode, a stream of green goo, makes it endlessly useful, while its slime tethering capability helps you solve a few puzzles and offers an additional and clever way of trapping your apparitional adversaries.

Weakening and trapping your enemies is the most enjoyable activity in the game. Generally, you weaken your enemy using the weapon most suited to the occasion, and then maneuver it into a trap using the capture stream. It's not as easy as it sounds. Some of the little buggers put up quite a fight, and even if you slam your target on the ground, it isn't uncommon to have a ghost wrangle itself away from the trap's capture beam. The more Ghostbusters you have dealing with the same enemy, the easier it becomes. You're never quite in control of these encounters, though the feel pleasantly authentic; it's like baiting a huge fish and trying to reel it in as it struggles. You can purchase pack upgrades that make this task, among others, a lot simpler. For example, you'll eventually be able to slam-dunk ghosts into a trap, which is a quick and satisfying way of ensnaring one of the pesky poltergeists.

You'll face off against an interesting variety of meanies, including some terrific-looking bosses. Some of them require using your various modes of fire, and they're often good fun. There are some minor tactics involved during these encounters, though bosses don't require a lot of creative thinking. For the most part, you'll be doing the same things throughout the game, which can get a bit tedious in time--especially when you realize that two of your four firing modes are doing the enormous majority of the work. The tedium is compounded some by the game's medium-paced tempo; your default movement speed is slow, and there are a few too many chunks during which you aren't trapping any ghosts. Yet while the action itself doesn't offer a lot of variety, the diverse environments, occasional puzzles, and wide array of enemy designs will keep you involved. Besides, trapping an enemy is so gratifying (again, think of bagging a humongous trout) that it's easy to look past the repetition.

As a rule, Ghostbusters isn't a challenging game, but every so often, the difficulty level veers into frustrating territory. You can take only a few hits before you're knocked out (you can't "die" per se), at which point you have to wait for an AI teammate to revive you. Your teammates are pretty quick to come to your rescue, but during a few encounters, projectiles seem to be coming from everywhere, knocking you over without giving you a chance to avoid them. The game is big on knockback attacks in general, so even if you aren't knocked out cold, you still might take a tumble and have to wait a few moments until you're standing again. The other Ghostbusters will be going through the same thing, requiring you to keep them on their feet while dealing with whatever enemies are at hand. Should you all get knocked out, it's game over. During a few scenarios, you'll be spending more time rushing around reviving downed team members than you will trapping ghosts, so between revivals, waiting for someone to revive you, and getting knocked over, there are a few moments when you don't feel like you're playing the game as much as you're trying to earn the right to do so. These occasions can be all the more annoying when you're in a tight space filled with a ton of objects. You can try sprinting into a better position, but the semi-unmanageable running mechanic, stripped right from Gears of War, is a poor fit for the small environments. A standard, controllable sprint would have been more welcome.

As vexing as these annoyances are, they're not so prominent that they cloud the experience. While Ghostbusters does have some negative surprises in store for you, there are plenty of positive ones as well. Encountering new enemies is a particular delight, because you can scan them into your database in a Pokemon, catch-'em-all way. You can do the same with hidden artifacts, and those scanned relics will then appear at the fire station that serves as your home base. There's also plenty of supernatural glee within your missions. In one creepy scene, bookcases slam themselves into new positions, which is fun and startling. The destructible environments crumble around you, and the game keeps track of the damage costs (it's amusing to see how much your exploits are costing the city). And chasing Stay Puft through the streets of Manhattan, while not quite as epic as you'd imagine, will still make Ghostbusters fans wring their hands with joy.

The story will take you seven hours or so to finish, depending on how much time you spend searching for hidden artifacts. There is a four-player online component as well, and it's not the throwaway multiplayer you may have expected. Actually, taking your busting online is rather enjoyable, and while the action itself is relatively simple, trapping ghosts with your buddies cooperatively is good fun. The mechanics remain mostly the same as in single-player, though you will choose a weapon specialty before joining the match, and you'll grab alternate weapon modes (they're scattered about as power-ups) within the match. While the nonstandard proton pack modes have limited use, you'll always have your standard proton/capture stream to rely on. There are six gameplay modes, called jobs, in all. Survival sends waves of progressively stronger ghosts; Containment has you capturing and destroying as many enemies as you can within the time limit; you defend disruptors from ghostly attacks in Protection; and in Destruction, you demolish as many relics as you can while under attack before time runs out. The best two modes are Thief, in which ghosts try to steal artifacts that you must wrestle back, and Slime Dunk, in which players compete to slam-dunk the most slimers. In both, the pace is quick and the potential for chaos is high, making for a riotous good time. You can play these jobs on their own or string them into a short campaign in which weapon upgrades remain persistent throughout.

The production values nail the Ghostbusters vibe. The sound effects in particular are fantastic, from eerie whispers in hotel hallways and groans of bosses to the whooshes and slurps of pulling a ghost into a trap. And while the game isn't amazing from a technical perspective, a vibrant color palette and detailed ghost designs make the story come alive. The character models do a reasonable job of re-creating the actors as they appeared in the films, though their movement and lip synching can be stiff, which makes watching certain scenes a bit uncomfortable. The best battles result in impressive light shows in which the screen fills with multiple streams of blazing light and goopy slime. The frame rate occasionally struggles to keep up on all three platforms, and while there are some minor differences among them, the game looks colorful and attractive regardless of which version you choose.

Ghostbusters The Video Game has some drawbacks, but those sour notes can't spoil a game that, by and large, tickles the funny bone and hits all the notes a Ghostbusters game should. If you're a fan of the films, or just like a little bit of supernatural fun, there's no need to glance about furtively when picking up your copy. Instead, hold your head high, confident that you've spent your money on a fun game worthy of its beloved license. 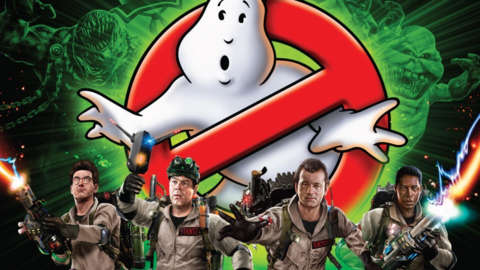 Harold Ramis, Dan Akroyd, and Bill Murray reprise their famous ghost-busting roles in this game co-written by Ramis and Akroyd.