While the game is technically proficient, the unbelievably lame speech and camera problems make Gex: Enter the Gecko a frustrating title at best.

The original Gex was a 2D side scroller that put players in the shoes of a wise-cracking gecko. You hopped around from platform to platform, making bad sitcom references along the way. The sequel drops Gex into a Mario 64 clone. While the game is technically proficient, the unbelievably lame speech and camera problems make Gex: Enter the Gecko a frustrating title at best.

The game starts by clueing you in to what Gex has been up to since defeating Rez - mostly sitting around and watching lots of TV. But like any good video game villain, Rez isn't done quite yet. The government tosses Gex a pile of cash, he makes a quick fart joke, and the stage is set for Gex's new challenge.

The graphics and frame rate in Gex 2 are quite good. It's about as close to Mario 64 as you'll ever get on a PlayStation. The worlds are big and fairly nonlinear, which leads to more than a little confusion as you wander the halls of haunted mansions, jump down rabbit holes, and bounce around the circuitry of a computer. A fair amount of pop-up is masked by fog and darkness. The sound effects are pretty good, but the speech simply drags the entire game down. Dana Gould, a genuinely funny stand-up comedian, deserves better. Instead, he's been reduced to making lame comments, several of them via a truly horrible Austin Powers impression. Once you've heard Gex shout: "It's tail time" in about a hundred different intonations, you'll want to start shoving safety pins into your ears until you've permanently damaged your hearing. I eventually wanted to beat my television with a bat. You can turn the commentary down or off, but considering that the game's entire selling point is based around these pathetic one-liners, you kind of feel obligated to leave them on.

The game also plays quite a bit like Mario 64. Each level has a number of remotes (read: stars) hidden in them. You pick a clue (just like Mario 64) and set out to find the remote described in the clue. There are also hidden remotes as well as a remote that is won by getting enough coin-like items in each world. Certain worlds require you to have a certain number of remotes before you can enter, just like - surprise - Mario 64.

Gex: Enter the Gecko should have been a much better game. They certainly jacked enough concepts from Mario 64 to warrant a good game, but the atmosphere surrounding the gameplay really brings it down. I'm hesitant to call it a good game, but one thing's for sure - it's better than Croc. 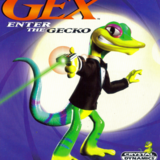