The control scheme has its quirks, but this is still an intense and enjoyable shooter.

Geometry Wars just keeps getting bigger and bigger. Originally released as a hidden minigame in developer Bizarre Creations' Xbox racer Project Gotham Racing 2, the brightly-colored dual-stick shooter eventually evolved into its own entity as a $5 download on the Xbox Live Arcade. Now the game has come to the DS and Wii in Geometry Wars: Galaxies. One might be wondering how a $5 game translates into a worthwhile value on these platforms for $30 and $40, respectively. The answer is depth. Galaxies overhauls the Geometry Wars experience into a structured series of unique levels that continually ramp up in challenge as you go. There are unlockables to acquire, multiplayer modes to check out, and on top of it all, the XBLA version of Geometry Wars: Retro Evolved is included as well. There's a surprising amount of stuff to do here, and while it all basically translates to shooting lots of geometric shapes over and over again, the gameplay is so consistently intense and crazy that you're bound to get sucked in.

For the uninitiated, Geometry Wars is a colorful take on the sort of dual-stick shooter that games like Robotron and Smash TV popularized years and years ago in arcades. You control a small ship that looks like a few hexagons smooshed together, and move around a grid shooting a wide variety of threatening geometric shapes, like spinning pinwheels, splitting squares, ship-seeking diamonds, circular serpents, and the like. The number of enemies you face steadily increases over time until the whole thing looks like some kind of neon-colored geometric orgy, at which point your best bet is often to either to drop a nuke and wipe the screen clean, or likely get destroyed.

One might question how exactly a system with no analog sticks manages to host something like Geometry Wars, and play well to boot. For the DS, Galaxies implements a touch-screen-based control system. You move your little semihexagon of a ship around using the D pad, and use the stylus on the touch screen to direct your shots. On the DS's top screen, you'll see a small red line that denotes which way your gun is pointing, and a small icon that sits along that line shows where the stylus is in relation to the ship itself. Guiding the ship this way is a bit of a challenge, mostly because it's not the most comfortable position for your hands to be in. Holding the D pad the way you do is definitely a good way to cramp your hand up, meaning you may have to set the system down from time to time and play that way. Still, the accuracy of this control system is surprisingly good. It doesn't quite replace the proper dual-analog setup, but it's a solid enough replacement.

Little of the intensity that made the Xbox 360 game so addictive has been lost in translation in Galaxies. The DS version of the game does run slightly slower than the Wii version, which sometimes makes some of the more furious battles a bit more easygoing than you might prefer. The DS game also lacks some of the visual flair of the console games. The background grid never distorts, making the onscreen action a little less chaotic. But that's really half the fun of the game, seeing so many insane colors bearing down on you at once, and, quite frankly, not quite knowing what the heck is going on. So with those details missing, the DS version loses a bit of its appeal. By no means does it wreck the game, as the DS version can be quite a lot of fun on its own merits. But if you're deciding between the two, the Wii version definitely has better, more exciting action. At least both versions include the same delightful techno soundtrack.

One interesting thing about the two versions of Galaxies is that they both offer nearly identical content. Both include the original, never-ending Xbox 360 game, both include multiplayer options (though those options do differ a bit--we'll get to that shortly), and both offer up the Galaxies mode, which is where the meat of the experience lies. Galaxies mode takes the standard Geometry Wars gameplay, and spreads it out across several galaxies, each with multiple planets to visit. Each of the game's 64 planets is a slightly different take on the standard game. One level might take place in a jaggedly shaped grid and include ever-moving barriers that you have to avoid getting stuck on while ducking incoming enemies. Another might include a couple of mine-laying baddies whose mines you can actually trip yourself to take out large groupings of enemies and earn a higher score.

Each level comes with a gold/silver/bronze medal system for high scores, but that's not the only incentive to keep going back to levels again and again. New to this game and exclusive to the Galaxies mode are geoms, little collectible shapes that fall out of recently exploded enemies. Geoms actually act as your score multiplier in this mode, replacing the old method of multiplying via kills. That's sort of a curse, since it forces you to actively upgrade your multiplier rather than having the game do it for you, and running around to collect those geoms can sometimes put you in a dicey situation. Still, it's a neat variance on the old scoring system.

These geoms can be used to unlock new galaxies and planets, as well as to buy upgrades for your drone. The addition of a little helper drone is also brand new to this game. Essentially, this little dot will follow your ship around, attacking enemies as you command it to. Initially it starts out with only one ability, attack. However, over time, you can buy new upgrades that change up how it attacks. You can program it to hover close and defend you, snipe enemies with more powerful but less frequent shots, act as bait to draw enemies away, or just run around collecting more geoms. Now, keep in mind that you can pick only one skill for each stage you play. Each new ability starts off fairly weak, but as you play with it more and more, your helper will level up. Leveling up seems to be exclusively based on playing time, though the game is never 100 percent clear on how the experience is doled out.

Multiplayer options also give the game some legs, though they aren't quite as fleshed out as the single-player experience. The game includes versus, co-op, and simultaneous play. Versus mode is odd, in that only one player actually controls a ship, and the other player ends up dishing out waves of enemies to try to kill you. Co-op is a fairly straightforward mode where both players control ships, and you both share the same supply of lives, nukes, and score counter. Simultaneous play has the both of you controlling ships, and each of you are given your own score counters, with the ultimate goal of getting the higher score. All of these modes are basically fun, though online play isn't an option, unfortunately. At least you do have the option to play with a single cartridge by having your friend download the demo via the local wi-fi connection and joining multiplayer from there.

It's also worth quickly noting that there is a bit of connectivity between the Wii and DS versions of Galaxies. It's nothing too major, but if you sync up a Wii copy and a DS copy via the connectivity mode, you'll unlock an extra galaxy in both versions of the game.

In the end, Geometry Wars: Galaxies proves its worth. This isn't just the same $5 game all over again for a higher price. The content added with the galaxies mode and the multiplayer functionality adds a lot of depth to the experience, and the control changes to both versions, while not as spot-on as a straight-up dual-analog control setup, work well enough to be not only playable, but fun as well. If you were a fan of the original game or just like intense shooters, Geometry Wars: Galaxies fits the bill.

Editor's Note: The original review text stated that the game did not support single-cart multiplayer, which is incorrect. GameSpot regrets the error. 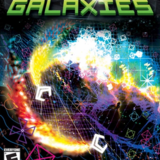 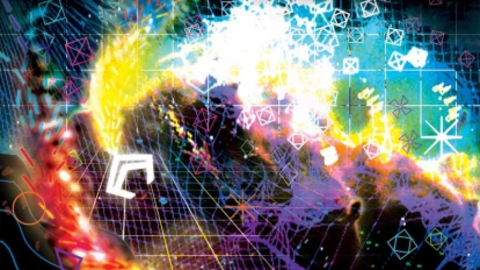 The neon blastfest heads to the Wii with re-engineered controls and multiplayer action.