In many ways, Gears of War 4 knows exactly what makes the series great to begin with, and capitalizes on those strengths in myriad areas. In other respects, however, the sequel feels like a misstep as the Gears franchise continues on its storied path. The result is a fractured mix of inspiration, exhilaration, and irritation.

The storyline follows JD Fenix, son of series regular Marcus Fenix, as he battles a new subterranean threat and the Coalition of Ordered Governments, an organization that has taken a sinister turn since the original Gears of War trilogy. The younger Fenix travels with new characters Kait and Del, both of whom reveal backgrounds and familial ties as the plot progresses.

Unfortunately, much of this narrative feels forced or predictable. The Gears franchise has always hidden a quality story beneath its macho jargon and shallow jokes, but new studio The Coalition doesn't find much depth in its storytelling: the humor is irritating, romances emerge on an insincere whim, and I never felt as if the characters actually cared about each other. Dialogue serves mainly as exposition, without the nuances that could otherwise flesh out complex relationships among the cast. Vistas are gorgeous and character designs portray a ragged society eeking out a living in a post-Gears of War 3 world, but there's not much emotional substance among the wreckage.

What's more, the actual gameplay suffers from pacing and redundancy problems throughout the campaign. The first two hours are the most abrasive, throwing multitudes of simple enemies at JD and his gang as they chew through the waves with conventional weapons in boring situations. It takes several chapters until firefights evolve past simple point-and-shoot scenarios.

But even then, the campaign seems intent on repeating situations time and time again: turret defense sequences, frantic fights against weaker, nimble enemies, and the simple act of clearing an area before a loud gong beckons you to the next skirmish.

This lack of inspiration is all the more frustrating considering the engaging scenarios that do emerge. Gears of War 4 introduces several mini-bosses that demand a new approach to the franchise's tried-and-true combat, and mitigate the feeling of deja vu as the chapters pass. There are also several campaign sections that make use of Gears of War 4's new Horde mode, planting it directly in the narrative during defensive scenarios with JD and his squad.

And Gears of War 4's Horde mode is fantastic. Whereas Gears of War 3's overextended itself, trying too hard to expound upon a solid formula, the wave-defense mode has found both confidence and creativity in its newest iteration. There's a handful of new mini-bosses that arrive on the scene every tenth wave to pound you with artillery or charge your position with claws raised. They wreck fortifications you've built, and shatter your best laid plans.

Rather than have you build turrets in set locations, Horde now gives you a fabricator, a portable station that lets you buy weapons and defenses to build strongholds around the map. This is all done through a currency called Power, which drops when you kill enemies. This small wrinkle is one of the new Horde mode's greatest additions. It forces your team to emerge from the safety of your barricades to gather every last bit of Power, forcing you out of your comfort zone and placing you in danger, should you choose to scavenge before the current wave ends. There's even a character class called the Scout devoted to gathering currency for your team.

Yes, Gears of War 4 also introduces upgradeable character classes to the Horde formula, asking you to fill a role on a team of up to five players. There's a Sniper, a Heavy, and an Engineer devoted to maintaining defensive emplacements. While classes seem like a forced addition on paper, they result in some of the best cooperative scenarios I've seen in the Gears of War franchise.

During one wave, my teammates and I were hunkered down in a well-fortified position on an abandoned farm. We had survived 19 rounds so far, had numerous upgraded turrets that our Engineer was repairing, and our sniper was flush with long-range ammo. However, when wave 20 arrived, so too did a Snatcher, a massive enemy that can swallow players whole before escaping to finish them for good. The enemy rendered our defenses useless--we had to leave our makeshift base, spring around the map, and pick off smaller enemies before killing the Snatcher. All hell broke loose as we did our best to maintain some semblance of a team amidst the panic.

Gears of War 4's Versus section displays the same quality craftsmanship as its wave-based counterpart. There are a host of minor improvements to the way you control your character, and they're all the more apparent when playing against other human players--you can now slide into cover, vault smoothly over barriers, and, most notably, rip enemies over walls when positioned correctly. It removes many of the repetitive stalemates that occurred throughout the original trilogy's multiplayer modes.

Of the new modes present in Gears of War 4, several showcase a more arcade-y side to the franchise's player vs. player combat. Arms Race grants each team specific weapons as they progress through the match, demanding new strategies as you cycle from the explosive Boomshot, to the close-range Gnasher shotgun, to the final weapon, the Boltok pistol.

My personal favorite mode, however, is Dodgeball. As in its real-world counterpart, you have the chance to tag teammates back into the match after they've been eliminated, simply by removing one of your opponents. It's a battle of attrition where one player can turn the tide, changing a three vs. one match into an even bout, or turning the tables completely to gain the upper hand.

It's worth noting that Gears of War 4 suffers from some technical issues, in both its multiplayer and story modes. Certain objectives didn't trigger during my campaign, forcing me to restart the last checkpoint and replay sometimes boring chapters. The game also froze several times in the menus as it tried to load a match, or even just the next menu page. These problems don't ruin the overall experience, but they're irritating enough to cast a pallor over some of the game's sections.

That serves as a microcosm for the entirety of Gears of War 4. This is a shooter teetering on the edge of something greater, but despite the improvements it makes to the storied franchise, its missteps hold it back. There is inspiration here, and creativity in the way Gears of War 4 rethinks its multiplayer modes. But the lackluster campaign and technical issues are blights on an otherwise exhilarating shooter. The result is a whole that doesn't reflect the quality of its often stellar parts.

Mike Mahardy found his groove with the gnasher shotgun again, and continued to use it across Gears of War 4's versus modes. Microsoft provided a copy of the game for review. 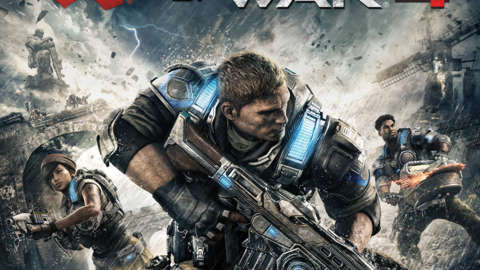 Gears of War 4 is the next installment in the Gears of War series and is exclusive to the Xbox One.