Whether you play it alone or with friends, this uninspired update to the '80s swords-and-sorcery arcade dungeon crawl misses the mark with its boring, mindless action and short, forgettable quest.

Gauntlet first appeared in video game arcades about 20 years ago, and its addictive hack-and-slash action was well worth the 25-cent price of admission. Featuring a memorable assortment of heroes and monsters as well as one of the first successful implementations of four-player cooperative gameplay in an arcade game, Gauntlet quickly became a classic. It's gone on to influence countless similar games, such as the hugely successful Diablo series and various Gauntlet spin-offs and sequels. The latest of these is Gauntlet: Seven Sorrows, a short, forgettable game that seems content merely to copy the design of its ancient predecessor rather than introduce any noteworthy twists or updates to a formula that's been driven into the ground over the years. Four-player cooperative play just doesn't do much to help alleviate the monotony of this game's flat, simple action.

Probably the most interesting thing about Gauntlet: Seven Sorrows is its story--though admittedly, that's not saying much. The narrative is told from the perspective of an emperor's ghost. Seems this emperor once betrayed his four mightiest defenders by attempting to steal their immortality for his own personal gain. Aided in this treachery by six scheming advisors, the emperor still ended up losing his life, because his plan more or less backfired. Meanwhile, the four heroes survived, and the advisors were left to run amok in the chaos that ensued. Brief story sequences introduce each of the game's levels, but once the action starts, the plot takes a backseat. There's really no story progression during the actual missions, and the whole thing comes to a straightforward conclusion as you take down the advisors one after the next. The story also flubs an opportunity to give the four main characters in Gauntlet any sort of personality. The manual offers up long-winded descriptions of how the warrior, elf, valkyrie, and wizard became the emperor's chosen, but they've got no speaking lines or distinguishing features in the actual game.

In the original Gauntlet, each of the four playable characters had slightly different characteristics for his or her attack power, speed, and more. In the new game, differences between the characters still are minor at best. Each fighter has a ranged attack and a smattering of close-combat moves, including guard-crushing attacks useful against shielded foes, and launcher attacks that can pop enemies into the air so you can keep hitting them as they fall. While the four fighters do look different, in practice they play pretty much identically, so there's little replay value to be gained from reattempting the game's levels using different characters.

Gauntlet's role-playing elements are paper-thin, too. You earn experience points as you defeat hordes of foes, and you'll also find gold pieces in each level, which you can use to purchase new attacks and combos between stages. Many of these moves are practically useless, but you might as well buy them for the sake of it, because you'll have earned enough gold to completely max out your character's arsenal by about the halfway point of the game (just a few hours in). Other Gauntlet-inspired games have made up for their simple combat with role-playing elements that compel you to keep finding better and better equipment. But in Gauntlet: Seven Sorrows, the same moves and tactics you'll be using right from the start will carry you all the way to the end. You do find weapon and armor upgrades on occasion, but these seem mostly cosmetic and have no obvious impact on the action.

There's not much to the action itself. In contrast to the mazelike levels of the original Gauntlet, Seven Sorrows' 3D levels are quite linear, requiring you simply to fight your way from one point to the next, occasionally flipping a switch or opening a locked door as you go. Enemies will spew forth from generators liberally strewn throughout the environments, so you'll find yourself hacking and slashing almost nonstop as you go. This action is about as mindless as it gets. A few enemy types hang back and shoot at you, but most just rush straight into your attacks. The wide swing of each of the heroes' weapons lets you cut down droves of foes with ease, so there's little point in stopping to block their strikes, and no real disadvantage to offset liberal use of your character's special moves. Performed with the touch of the D pad, these moves send all the foes around you flying, and can quickly destroy generators to boot.

Given all this, the action quickly takes on a dreary, repetitive feel, and whatever slight thrill you may initially experience from watching a half-dozen enemies get bowled over by your slashes quickly fades. The game at least throws some different-looking environments at you, and some of them have traps you'll need to avoid, but the lack of enemy variety or creative level design prevents Gauntlet: Seven Sorrows from picking up any steam. What's more, the game is really easy at the normal difficulty level, save for a fairly tough next-to-last boss. Higher difficulty modes make enemies stronger and reduce the number of lives you have to complete each level, but don't fundamentally address any of the game's main problems.

The game's throwbacks to the arcade classic are about as superficial and disappointing as everything else about it. Yes, you'll hear an enigmatic announcer say things like "red warrior needs food, badly" when you're running low on health, and a few audio cues (such as for when you grab a key) will sound familiar. But the game passes on bringing back the foes of the arcade original, instead pitting you against throwaway swordsmen most of the way through. Probably the most obvious tie-in to the original game is that Gauntlet: Seven Sorrows lets up to four players have at it simultaneously, either using the same console or online. But there's nothing much about this game that makes it better or more fun when played with others. In fact, in some ways the co-op gameplay is worse than when you're just playing alone, because it's more confusing. In the original Gauntlet, other players' help was almost always welcomed, because the levels became that much easier with the extra firepower...at least, until one of the other guys accidentally shot the food. In Gauntlet: Seven Sorrows, there's rarely a situation that you couldn't easily handle by yourself, and there's nothing about the way the game is structured to really foster cooperation. Basically, playing the game with friends just makes for less stuff for any one of you to kill.

The Xbox and PlayStation 2 versions of the game control identically and have similar visuals, though Xbox version looks a bit cleaner and sharper. It's also easier to get online using Xbox Live (the PS2 version prompts you to jump through some other hoops like entering your age), and of course, you can also plug four controllers into an Xbox for convenient four-player offline play. Visually, Gauntlet: Seven Sorrows is decent but unremarkable. There are a few nice details in some of the environments and the game manages to throw a good number of enemies at you without really slowing down. But the bloodless hack-and-slash combat lacks any real impact, and there are only a few times when you really feel like you're getting flooded by foes. That's partly because the game's camera perspective is close enough to your character that it seems you never get to see more than maybe a dozen bad guys at a time. As for the audio, it's mostly dull. You'll hear your character grunting and groaning, and the announcer chiming in with the same few comments over and over. Some orchestral music hums quietly in the background during all this, while the announcer struggles to keep up with the action in multiplayer matches, repeating the same lines over and over. You could just as well play through the game with the volume all the way down.

Gauntlet: Seven Sorrows is an attempt to revive an old game, but instead it just seems really old itself. Those looking for some good hack-and-slash action could find a much better, deeper, more memorable experience in countless other games out there. And if you consider yourself a fan of Gauntlet, move along, there's nothing to see here. Playing through Seven Sorrows is no trip down memory lane, since this spin-off really shares only the simplistic structure with the arcade original. 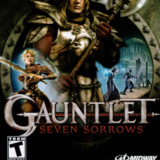 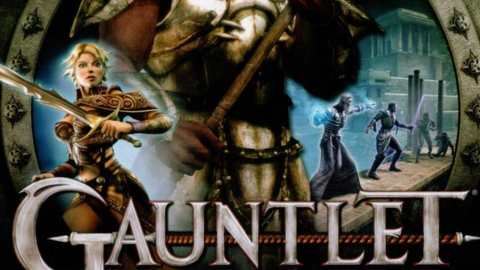 The arcade classic returns with Gauntlet: Seven Sorrows. The game improves upon the old title with a deeper fighting system and light RPG elements.