Gatling Gears is a fun shooter that reminds you how much of a blast destruction can be.

Twin-stick, top-down shooters on Xbox Live Arcade and the Indie Games service are a dime a dozen. Games like Geometry Wars have set the bar high, making it difficult for new games to stand out from the crowd. Entering this crowded arena is Gatling Gears, a solid shooter with enough firepower to land it in the upper echelons of the XBLA library.

Gatling Gears stars Max Brawley, an ace pilot who deserts a corrupt, war-hungry Empire with his high-powered battle mech in tow. Max can't hide out in peace forever, though, because eventually the Empire comes storming back in to ravage his peaceful hamlet, forcing him back into the cockpit to take down the Imperials once and for all. Players familiar with the developer's previous game, Greed Corp, will find many references to that game in both the story and the industrial-revolution-inspired world design of Gatling Gears. Unlike the turn-based warfare of Greed Corp., however, Gatling Gears is all action, all the time.

Gatling Gears starts you off with a very brief tutorial to get you accustomed to the controls. The left stick moves Max's mech, while the right stick aims the direction of the machine's auto-firing Gatling gun. The left and right triggers are used to launch the more powerful (but restricted-usage) grenades and rockets, while the Y button detonates a single-use-per-stage smart bomb that destroys everything onscreen. The controls and the use of the weaponry at your disposal are very easy to grasp, and you'll be happily blasting buildings, stomping soldiers, and pumping opposing machinery full of bullets in no time.

Although you rely on your standard-issue Gatling gun most of the time, it quickly becomes apparent that mastery of the other weapons is also important; the tougher tanks and robust sub-bosses require rockets to put a real dent in their armor, and the big blast radius of grenades can easily take out an army of irritating foot soldiers. You also get weapon upgrades in two different forms: limited-time power-ups and purchasable upgrades. The power-ups are found by defeating certain enemies, and they temporarily grant either superstrong attacks to a specific weapon or complete damage invulnerability. Upgrades have no such time restrictions and can be purchased at the beginning of each area in exchange for gold ingots found scattered throughout the stages. These upgrades come in multiple strength levels for each weapon and can also be traded back for gold to buy other upgrades if, for example, you're in an area where you would prefer to have upgraded grenades rather than an upgraded Gatling gun.

The smooth controls and fun weaponry would be wasted if the stages themselves weren't enjoyable. Fortunately, Gatling Gears features great, action-driven stages and enemy pattern designs that keep you on your toes. A few areas, particularly toward the beginning of the game, have a tendency to drag, but by the later levels, Gatling Gears constantly launches challenging design curveballs at you. The levels look nice, too; you might associate military and mechanical themes with varying shades of brown and gray, but Gatling Gears frequently offers up colorful, nicely rendered environments that add welcome variety. The enemy swarms and routes through each area are carefully structured so that you have time to get used to new enemies and gameplay elements before encountering areas with large enemy waves. They also offer ample bonuses afterward so you can get your bearings before the next challenge gets thrown your way. You'll be thankful for this deliberate pacing when you reach the big boss enemies. Gatling Gears' bosses work beautifully, challenging you to use your weapons and pattern-recognition skills to take down mad machines with crazy, changing gimmicks.

Gatling Gears also deserves commendation for its implementation of co-op play. With such intuitive controls and fun stages, it's easy to grab a buddy either locally or via Xbox Live and have a grand old time blowing things to bits. Xbox Live play is smooth and easy to jump into; it allows you to take all your weapon upgrades with you so if you have a less-skilled online buddy stuck earlier in the game, you can hop in with your superpowered mech and help him out. You still need to be careful, however: If one player goes out of commission, it's game over for the both of you. The two-player game is considerably easier (though still very hectic), particularly in the extra Survival mode levels, which turn the gameplay into an interesting twist on the tower-defense formula. It's not nearly as difficult to protect your buildings from enemy forces when you have double the firepower.

Gatling Gears isn't without a few dents in its shell, however. The length of some levels can start to grate at times, and the number of things happening onscreen can be very distracting, particularly when there are all manner of attacks and explosions flying about. It's easy to lose track of where things are, which can lead to taking damage you might have avoided otherwise. Some of the effects--such as the screen-filling explosion caused by the grenade power-ups--can blind the view of enemy projectiles coming at you. It's also worth noting that we experienced one game-stopping bug during our play sessions. After destroying the final form of the game's third boss, the game stalled, allowing us to move and fire but leaving the boss alive and nonfunctional with zero health, which prevented the stage from being cleared until we restarted. Nevertheless, Gatling Gears is a great experience. Well-designed stages, fun gameplay mechanics, and frantic co-op play combine to make a game that stands well above many of its peers in the genre. Though it may be a tad pricey at 1,200 Microsoft points ($15), your money will be well spent playing with these Gears. 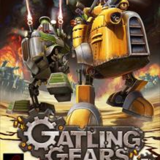 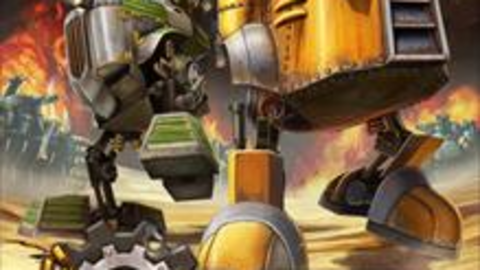 From the team that created the award-winning Greed Corp comes Gatling Gears.