Hectic action, smartly conceived weapons, and one heck of a soundtrack all make up for this shooter's lack of innovation.

Gate of Thunder was one of the original pack-in games included with the TurboDuo, a souped-up system that combined the TurboGrafx-16 console, its CD add-on, and some extra memory into a single unit. So it's only fitting that Gate of Thunder is the first CD-based TurboGrafx game to be made available for the Wii's Virtual Console service. For 800 points, you get seven stages' worth of intense 2D shooter action, memorable boss battles, and an elaborately produced soundtrack that some consider a classic.

If you're familiar with horizontally scrolling shoot-'em-ups such as Gradius and R-Type, you'll feel right at home with Gate of Thunder. You get three ships multiplied by seven continues to get through seven stages, each of which entails dodging enemy fire, avoiding the scenery, and destroying as many enemy ships as you can. The design isn't innovative in the least. You blast them, and they blow up. They blast you, and a new ship appears to replace the one you lost. However, the excitement level is always white knuckle, thanks to the speedy scrolling of the scenery as well as the constant volleys of missiles and plasma unloaded by each successive wave of enemy ships. Furthermore, the numerous subbosses and bosses are ominous, intricate, and require some strategy to defeat.

Thankfully, the weapons system is well conceived. You can blanket the screen with firepower after acquiring only a couple of power-up pods, and the weapons themselves are all nicely balanced. Just tap the button and you'll quickly cycle from a piercing laser, to a less-powerful spread wave, to missiles that deal crazy damage to anything above or below you. Some pods also give you the added benefit of back-up homing missiles and shields. One particularly welcome feature is that you can double-tap the fire button to direct the firepower of your two companion ships directly behind you, which comes in handy for dealing with ships that fly past you or those that appear from the rear.

The visuals aren't especially detailed, but the game makes up for that with some slick background-layer scrolling effects as well as a constant onscreen deluge of ships and missiles. You may also find your interest piqued by some of the scenery elements you have to avoid, such as falling space rocks and giant crushers that actually shove inward from the backdrop. Although the sound effects and voice samples are merely passable, the soundtrack consists of one wonderful track after another of rousing compositions put together with old-school synthesized beats and CD-quality instrument samples. Imagine stereotypical chip-generated video game music mashed up with your favorite orchestral CD and you'll end up with the general gist.

Of course, the game is short, like most shooters are. It also opens with a dull outer-space mission and saves its two "drop your jaw"-caliber stages for the end, which will take most people a couple of hours of practice to reach consistently. Overall, though, if you enjoy space shooters, you'll enjoy going through Gate of Thunder multiple times. That's not a bad return on the roughly eight-dollar asking price. 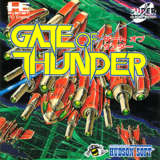 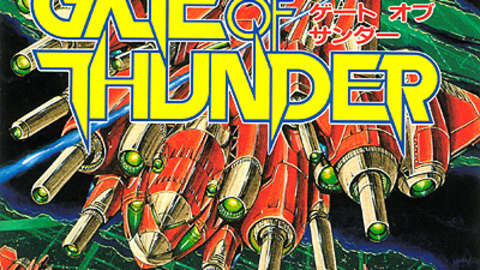