There's no shortage of things to do in Gangs of London--the trouble is that none of it is much fun.

It certainly isn't a lack of content that ends up sinking Gangs of London, nor is it a lack of atmosphere. Ultimately, what turns SCEE London Studio's criminal-themed action game for the PSP from potentially cool to mediocre is its mundane and periodically broken gameplay. If this scenario sounds familiar, it's because this same sort of problem has plagued London Studio's previous forays into the London underworld in the Getaway games. But never has this issue been as unbalanced as it is in Gangs of London. Between the game's dozens of story missions, comic-book-styled story presentation, free-roaming bonus missions, parlor games, and turn-based strategy mode, you'd think that at least one of the things would turn out OK. Sadly, no single aspect of Gangs of London plays well, and there's just not much fun to be had with it.

The bulk of the game is found in the story mode. In this mode, you take control of one of the five ruling gangs of England's most famous city. These gangs run the gamut from old-school English hooligans, run by a crusty old man from the oldest of the old schools, to a crew of Russians that use a military-like ruling structure, to the oft-used Chinese triad. There's not much story, save for brief introductions of each gang at the start of a story, as well as the teensy bits of intro and outro for each mission you take on. The progression of the story mode itself is disjointed. The overall point is to try to take over the territories of the rival gangs, and you do that by performing a series of missions. The trouble is that none of the missions seem connected. One minute you're kidnapping the leader of a female gang, and the next you're helping some character you've never heard of rob someone to pay off his gambling debts. After you complete all the available missions in a given area of the map, you take on the leader of that area's gang, and ultimately take his territory.

You might be able to forgive the scattered nature of the story mode if the missions themselves were worth doing--but unfortunately, they're not. What you get with Gangs of London's missions are pieces of other, better missions from other games of this type. Sometimes you're driving a car, chasing another driver while trying to destroy his car. Sometimes you're driving a car, running away from a driver while he's trying to destroy your car. Sometimes you run around a linear environment, shooting every dim-witted bad guy you come into contact with. Sometimes the game inexplicably gives you the same mission, but without the benefit of a gun, which forces you to use lame stealth mechanics while you pray that there isn't a bad guy around the next corner holding a submachine gun, since there's no indicator as to where an enemy is on the map or which way he's facing. The stealth missions in particular are abysmal--enemies will sometimes randomly turn around on you, even while you're crouched and quiet, and trying to fight an enemy with a knife while he's holding a shotgun is a good way to make you throw your PSP across a room.

All of these missions, save for some of the boss fights, take one to three minutes to complete. You'll be shocked how many times you hop into a car and drive into another car until it catches on fire, and 60 seconds later you're done. Mission objectives repeat constantly, as well, not just over the course of all five gang storylines, but also within each storyline. The number of times you do the same basic driving and shooting missions, with only a marginally different end objective, is ludicrous. By the time you've defeated your first gang, you've essentially seen every mission type the game has to offer.

It also doesn't help that the missions aren't the least bit fun. The shooting and driving mechanics pretty much rob the game of enjoyment right off the bat. When on foot, you're forced to hold down the left trigger to side-strafe, which is a clunky process when you're trying to avoid getting shot from several different angles. When shooting, you can autotarget using the right trigger, but the autotargeting does a lousy job of finding the best possible target. Often you'll find yourself aiming at a car or trying to shoot an enemy that's blocked by one of your own gang members. Though the game purports to include tactical, squad-based gameplay, there's nothing tactical about it. In missions where you have other gang members around, you can try to command them to move forward, stay put, and the like, but most times they don't quite do what you ask. Telling them to join up with you often results in one of them running backward while the others slowly amble toward you at snail-like speeds. You're better off just making sure they take the brunt of the bullets.

Driving is even worse. The car controls in the Getaway games were never all that good, but here they're made 10 times as obnoxious by the overly sensitive PSP analog stick. It's like driving on an ice rink with greasy tires, and the amount of random traffic populating the environments makes keeping your car in good working order a real chore. Fortunately, you don't spend much time driving, since the missions are so short, but when you do drive, it's a hassle. You'll also periodically encounter some weird glitches while driving, especially if you run into pedestrians. Pedestrians don't seem to want to die when you run them down. Instead, they get stuck in a deeply ugly-looking way that causes a rather loud audio glitch, and it stays that way until you veer in an opposing direction, at which point they run off, seemingly unharmed.

There is more to Gangs of London than its lame story missions, but none of these things are much better. You can't freely roam around the realistically modeled city of London in the story mode, but there is a free-ride mode, which includes a few side missions that involve such objectives as escaping the police; pulling a Speed and driving as fast as you can to prevent a bomb from exploding; beating up rioting civilians; and beating up zombies. Yeah, zombies. Anyway, amusing as these missions might sound, they all suffer from the same wonky controls and relative brevity that the story missions suffer from, so they're not any better, overall.

Another mode, titled gang battle, is basically a turn-based strategy game for limeys. You're shown a map of the city, as well as colored sections denoting which territories are owned by each gang. The primary resource is cash, and you use it to purchase new gang members and cards, which give you bonuses on each turn. On a given turn, you get three moves. With these moves, you can add more gang members to each section of territory you own, as well as send gang members into nearby rival territories to attack. The key is to try to send more of your guys than the other gang has in that area and thus take the territory. It's a neat-sounding idea, but the mode doesn't get beyond this base level of strategy. You just keep earning money, adding dudes, sending them after territories, and using the to bulk up your defenses, and you do this until the game is over. You don't even get to fight the gang battles yourself using the main game engine.

Finally, there are the parlor games, all of which can be played multiplayer--not via other PSPs, mind you, but via a single PSP, where you hand the system off to people for their turns. The back of the box does show a game-sharing feature, but it's actually just a single-player demo. The parlor games include the usual array of British pub activities, like darts, skittles, UK and US pool, and a peculiar variation on the popular cell-phone game Snake. The actions for playing these games are pretty simple. For the darts game, for example, you simply tap a button at the right time to set your aim, time another button press to set your angle, and let 'er rip. The pool game doesn't involve much more than aiming your shot with the analog stick and then setting your power using a quick power meter. You can't call any of these games more than a brief, amusing distraction, but for what they are, they're not bad. It's just unfortunate they're not included in a better game.

Gangs of London does a better job with its presentation than with most anything else. The in-game graphics are not the highlight, however. Though the game looks like a scaled-down version of the last Getaway game, the only thing that's impressive about it is the size of the city. The character models are drab and don't animate well, and you'll run into a number of weird glitches, frame rate drops, and camera issues as you play, especially while you're driving. On the plus side, the game does use kind of a neat, comic-book-styled cutscene system, similar to the one in Max Payne. These panels have some nice-looking artwork, and the voice acting that accompanies them is great. It's the same brand of bawdy, English rhyming slang-heavy dialogue that the Getaway games featured, and while it's a bit much at times for those without a master's degree in Cockney, the actors sell the parts well and come off amusingly without hamming it up too terribly. The one odd aspect of the voice acting is its selective bleeping of curses. "F" words, "S" words, "C" words, and the like all get bleeped, but plenty of offensive references to female anatomy go untouched. If you're going to leave all those in, why not leave in the "F" bombs as well? The game already sports an M rating.

Regardless of your affinity for British profanity, Gangs of London isn't a game worth playing. The mission designs go beyond pedestrian into the realm of actively unpleasant less than an hour into the experience, and all the ancillary modes in the world can't make up for weak controls and bland gameplay. The truly perplexing thing about the game is that many of these issues have been around the Getaway series for years now and are somehow made significantly worse in this game. Unless you're absolutely desperate for an expensive parlor-game simulator for your PSP, Gangs of London is best left on the shelf. 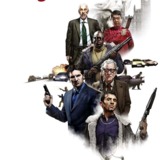 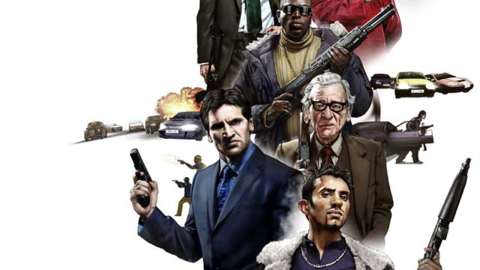 Gangs of London is a portable spinoff of The Getaway, using the styles and themes of the original with new PSP-specific content and features.