Game of Thrones: Episode One - Iron From Ice Review

You play and you cry. There is no middle ground.

The first major decision you make in Telltale’s Game of Thrones breaks you. It’s a deceptively complicated choice, a choice you second-guess for the entirety of the two-hour opening episode. You would think that making a choice between, say, saving one life and saving many lives would be simple. You have to do what’s best for the house you serve, right? But what if it’s not the best thing for you, personally? What is more important: self-preservation or your lord’s legacy?

“When you play the game of thrones, you win or you die. There is no middle ground.” So says Cersei Lannister in the HBO television series Telltale’s game is based on, which itself is based on George R. R. Martin's A Song of Ice and Fire books. Game of Thrones makes you participate in the twisted machinations of said game of thrones in an attempt to protect the reputation and ensure the survival of your family, House Forrester. The Forresters have long served House Stark, a house that is already rapidly spiraling into bad favor when the first episode opens. This places the Forresters in an already precarious political situation, which in predictable Game of Thrones fashion, only gets worse.

Thrones’ story begins just as the War of the Five Kings is heating up. Five lords all seek to claim the Iron Throne and assume kingship over Westeros. The political climate is hot with peril and tensions are strung so high that lords and handmaidens must choose every word carefully, on pain of losing their status and life if they so much as look the wrong way at someone in power.

This stress hangs over everyone involved in the delicate dance of fighting for kingship, but Telltale’s Thrones perfectly communicates the anxiety by focusing on a smaller house that is not directly in the limelight. House Forrester is no House Stark in stature, but in terms of familial loyalty, duty and love, this family is very similar to the ill-fated Wardens of the North. House Forrester is still vital to Westeros, however, as the family controls the majority of the world’s Ironwood, a strain of wood that is in high demand for its durability and strength. These groves of Ironwood are just one more thing you need to keep track of as you guide the Forresters through precarious situations with other lords and ladies. You play as three members affiliated with House Forrester, and the three in question will change with each episode. Telltale’s tried-and-true branching dialogue choices are present in Game of Thrones, along with its simple analog stick shifting and button mashes to maneuver through fights. And there are quite a few fights in this first episode. Prompts appear for trigger-presses that end with the swing of a greatsword or the stab of a pitchfork. Sometimes these prompts call for frantic button mashing to escape burning debris or wrestle out of a soldier's grip.

Game of Thrones is less about combat and more about verbal parlaying. The emphasis on talking is very much a Thrones thing; just as in the show and books, words carry a weight that can make or break your fate. One wrong word to Joffrey and you’re executed on the spot. A flippant comment to Littlefinger and you’re as good as ruined. Failing to curry favor with Margaery, Cersei, or any other powerful lady in court could spell doom for you when you most need help.

Game of Thrones successfully recreates this panic in game form, dropping you in the middle of sticky situations that will be familiar to you if you know the source material. The most chilling of these scenes involves you having to talk your way into favor with a certain unpredictable highborn woman. Your dialogue options suggest that you can lie outright and say everything she wants to hear by feigning absolute loyalty, profess loyalty to the lady you serve and risk bringing mistrust on your head, or go all-in, defending your house and the North in exchange for what could be a horrendous punishment. This scene is the essence of what Game of Thrones tries to convey, a healthy amount of fear coupled with the responsibility to protect your family from extinction.

Every decision you make matters. Everything you do has a consequence, not just for you, but for the house you belong to or the people you serve. If you a kill a man belonging to a rival house, you can bet that rival house will want vengeance. If you reveal your secret plans to another handmaiden, someone else will find out. And if you ask the wrong person to use his or her power to help you, it could not only bring misfortune onto you but onto your new ally as well, affecting your relationship. The Game of Thrones show paints pictures of a ripple effect that never stops rippling, and this same effect is an omnipresent thing in the game. It's difficult to explain without spoiling some very intricate political clockwork, but the game does an excellent job of stage-setting in a way that makes it immediately apparent every choice will haunt you later.

There are a lot of small details in Iron from Ice, many brief moments and markers that you may miss, at first, due to the episode’s slow pacing. Game of Thrones starts at a slow-burn, with an opening episode that is almost entirely stage-setting for the five more episodes to come. It’s never boring, but there are a few scenes that feel a little too long with slow-moving dialogue. For example, a shouting match against a rival lord that won't take no for an answer runs in circles; he asks for what he wants, you say no, he says he won't leave without it, you offer something else, he says no, you have the option to lie to or yell at him, he goes back to his original argument. The pacing is very George R. R. Martin-esque, but in the context of a game it dissipates the momentum. However, these stretches of quieter scenes are worth it when you get to the more heart-pounding climaxes of each playable character’s tale.

One of the biggest charms of Game of Thrones is being a part of major events from the show. It’s exciting (and also sometimes devastating) to fight in familiar battles or chat with well-known characters. These longtime characters are also voiced by their show actors, adding a deeper thrill to these encounters. I was tingling after completing a scene featuring the sadistic Ramsay Snow--I was on edge, my body completely tense. I didn’t realize I had been sitting completely still, barely breathing with mouth agape as I tried to tell Ramsay all the right things that would just make him go away. It’s moments like these that make you feel as though you’re right there in the show, with Ramsay Snow breathing death in your eyes and waving a dagger underneath your nose.

Recreating the sense of anxiety-riddled anticipating that the show is known for is one of the better things going for Telltale’s Thrones, but the best is the Forresters themselves. Spending time with Margaery Tyrell or Tyrion Lannister is enjoyable, but whenever the action turns to these characters you instantly want them to leave. The Forresters are a heartwarming, earthy group that epitomize Telltale’s knack for creating deep, attractive characters. They, like the Starks, are in a bad place due to a poorly-dealt hand of fate, and their plight, the central story, is genuinely gut-wrenching, horrific, and real.

You grow to love these characters because of the brave faces they try to put on and the doubt and pain that nearly destroy them. It’s hard to name one character who does not change in some way due to the events of Iron from Ice, and that character development is both a reflection of author George R.R. Martin’s character design influence and Telltale Game’s ability to birth beautiful broken people that you want to spend time with. You come for Tyrion and Cersei, but you stay for the Forresters.

Telltale has again successfully paired itself with a franchise that knows how to wring emotion from its audience. Game of Thrones is off to a slow but not uneventful start, with an almost unfairly large heap of teases and promises for the next episode. The pacing is true to its source material--slow, taking its own time--but the payoff for major scenes is worth wading through. If the show makes you scream, the game will make you scream, because it’s difficult not to get wrapped up in the struggle to serve and hold up your house. It’s a game about family told in perhaps the most un-family-friendly environment in fantasy fiction, and in a way that will leave you sick with delight and sadness as the credits roll.

Alexa Ray Corriea is the absolute worst about accidentally dropping Game of Thrones spoilers because she gets too excited and can’t help herself. Don't talk to her. 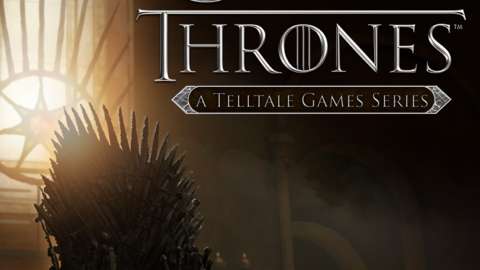 Game of Thrones - A Telltale Games Series is targeted to premiere digitally in 2014 for home consoles, PC/Mac, and mobile devices.

7.4
Sign In to rate Game of Thrones: A Telltale Games Series