Nintendo's new game creation software may not let you make the game of your dreams, but it's a fun-to-use toolkit nonetheless.

Game Builder Garage isn't Nintendo's first foray into game creation software, but its previous efforts have all been narrowly focused. Super Mario Maker and its sequel gave you the tools and freedom to create your own Mario levels, while WarioWare DIY for the DS let you create and share brief microgames. Game Builder Garage, on the other hand, seems to have grander ambitions. Nintendo has billed it as a way to "learn to make games from the minds at Nintendo." While it doesn't quite live up to that sky's-the-limit pitch, it's nonetheless an impressively flexible toolkit and a charming introduction to the basics of game creation.

To further help ease players into the experience, the game cleverly personifies the different nodes as beings called Nodon. These creatures come in many varieties, each representing a different mechanism or element of the game; there are Nodon that conjure specific items like apples and boxes, and others that track time and control the camera. Each type of Nodon looks and sounds distinct, which helps make it easier to remember their different functions.

Game Builder Garage gradually introduces the Nodon and how they work in conjunction with one another through seven guided lessons. Each is divided into several smaller steps that walk you through the programming process, and by the end of the lesson, you will have manually created a little game. The lessons are overseen by an excitable and charming blue dot named Bob, and their bite-size nature breaks down normally complex programming concepts into digestible chunks, making it easy to follow along.

The downside is that the guided lessons are rigid. Until the final step, the game usually doesn't give you any freedom to deviate from the lesson; you must follow the instructions precisely as they are relayed. Moreover, you must complete the lessons in order; you cannot, say, jump to lesson five without first completing the previous four lessons. This restrictiveness is understandable to an extent, as each lesson builds upon the last by introducing progressively more complicated concepts. Even so, they can be excessively hand-holdy, and their lengthy duration--each lesson takes at least 60 minutes to complete in its entirety--means they can feel like a chore if you just want to dive into the later lessons.

After you complete a lesson, the game will put up a "checkpoint" that will task you to apply the knowledge you just learned to solve five small puzzles. The checkpoints are overseen by Bob's counterpart, a white dot named Alice, and they test your understanding of the concepts you just learned. One checkpoint may ask you to figure out how to snag an apple without being able to move the character, which means you'll need to go under the hood and program some kind of workaround. Thanks to their puzzle-like nature, these checkpoints feel satisfying to solve and help reinforce the main lessons. Alice also oversees a guide that further delves into each type of Nodon, effectively offering a series of complimentary lessons. These are a boon, as they provide a quick refresher on the Nodon without having to sit through Bob's often-lengthy explanations.

Once you've completed the first lesson, you'll unlock Free Programming mode, Game Builder Garage's headlining attraction. It's here that you can tinker around with Nodon as you wish, and it's pleasingly flexible; the game features a wealth of Nodon and assets to work with, so you're really only restricted by your own ambitions. That said, there are limits to what you can make. Since the software only features a few different pre-made character and item models, your games will likely end up feeling somewhat generic. Even so, for those inclined, experimenting with different Nodon, figuring out how to combine them to create different effects, and inadvertently stumbling upon a fun gameplay idea is a joy. Whereas Nintendo's seven included "games" are largely rudimentary and designed more to illustrate basic programming concepts rather than to be replayable, Free Programming is the star of the package. It's a delightful little sandbox and the most appealing aspect of Game Builder Garage.

After creating a game, you can upload it to Nintendo's server and share it with other players. Unfortunately, unlike in Super Mario Maker 2, there is no in-game hub where you can browse and play other players' creations; you can only receive another person's game by inputting their download code. This is disappointing considering that much of the joy of Game Builder Garage comes from sharing your creations with the world, so you'll need to turn to outside resources such as social media and dedicated communities if you want to share your games and discover ones made by other players.

Sharing issues aside, Game Builder Garage is an endearing and fun-to-use game creation tool. While the software may not allow you to make the game of your dreams, it's a smartly designed and flexible package that gives you an impressive amount of freedom to create nearly anything you can think of. Even more importantly, it offers an illuminating (if highly simplified) look into the work that goes into creating a game, and that is its most invaluable lesson. 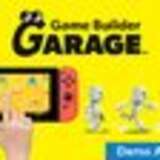 Kevin completed each of Game Builder Garage's guided lessons and spent several hours tinkering around in Free Programming mode. Code was provided by the publisher for this review.