The trademark Wario weirdness is still there, but Game & Wario is too uneven and frustrating to wholly recommend.

Ten years ago, WarioWare, Inc.: Mega Microgame$! for the Game Boy Advance garnered attention and acclaim for its skewering of the minigame trend. The game featured "microgames" lasting only a scant few seconds, punctuated by utterly bizarre imagery and even a bit of retro flair. It was a resounding critical and commercial success, and future installments took advantage of unique features of Nintendo's platforms while still maintaining the series' frenetic pacing. However, Game & Wario, the Wii U follow-up to the franchise, takes things in a different direction, and winds up becoming the uneven minigame mess that the original WarioWare poked fun at so long ago.

Game & Wario is a collection of 16 minigames that make use of both the Wii U's unique GamePad controller and the TV screen. Each game is themed around one of the weird residents of Diamond City, so longtime WarioWare players can expect to see familiar faces as well as some recurring series imagery. (Some of the backgrounds contain funny in-jokes for fans, so keep your eyes peeled.) Twelve games are single-player focused, while the remaining four are multiplayer affairs. Rounding out the package is an additional Miiverse-enabled application.

While the multiplayer and Miiverse applications are available from the outset, the single-player games have to be unlocked by completing the previous game to a satisfactory degree. The games can then be replayed on various additional difficulties for score challenges and to earn extra credits to spend on unlocking extras at the Cluck-a-Pop machine. The problem is that many of the collection's best games aren't unlocked until you've cleared some of the worst of the bunch. For many of these games, once you've cleared them, you'll never feel compelled to touch them again.

The issue that many of the collection's most frustrating games have is that they ask that you use the big, bulky Wii U GamePad as a precision aiming device. Unlike the Wii Remote, the size and shape of the controller makes it difficult to focus precisely, particularly if you're asked to hold it one-handed. The very first game, Arrow (which feels much too similar to Takamaru's Ninja Castle in Nintendo Land), proves frustrating off the bat as your shots miss targets the game indicated were in your line of fire. Camera is a bit more forgiving, but it's essentially a hidden-object game that requires you to have very steady controller-holding hands in order to take clear photos of people and things in the environment.

Other games focus more on the tilt sensitivity of the GamePad with mixed results. Skiing and Bowling are basic implementations of the sports they represent with tilt controls to move or aim. Kung Fu feels like a 3D version of Doodle Jump: you use the tilt function to control where a constantly bouncing character lands. Ashley takes the titular witch on an adventure that initially looks like an interesting parody of cute Japanese arcade shooters, but turns out to simply be a slow-paced tilt-to-move collection and obstacle-avoidance game.

When the tilt sensitivity acts up in these games, it's tough to discern if the problem is you, the controller calibration, or just poor design. But there's poor design present, too--ironically, in a game called Design, where you're asked to draw shapes to very precise measurements. If you don't know exactly what a 25-degree angle or a circle with a 2.5-inch circumference looks like off the top of your head, you'll be tempted to dig out your old geometry class supplies just so you can proceed. Other minigames are just retreads: Bird, one of the final games, is the classic Pyoro bean-eating game that has appeared in almost every WarioWare title in some form. Aside from the visuals, it has barely changed from the original, which you can still buy on the DSiWare eShop.

But among these average and even outright annoying minigames are some true gems. Patchwork is a charming, relaxing puzzle game where you fit shapes into outlines to create pixel images. Gamer puts classic WarioWare-style microgames on the GamePad with an added challenge: you're playing past your bedtime, so you have to look and listen for signs of your seemingly demonic mom checking to see if you're asleep, and hide at appropriate times. The brilliant Taxi is the offspring of Crazy Taxi and a first-person shooter, with some Minecraft-inspired aesthetics thrown in. In this game, you're fighting off alien invaders with a cab-mounted bazooka on the GamePad screen, then picking up passengers and dropping them off at their destinations before a tense battle with the extraterrestrial mothership. It's a creative, fun concept that you can't help but think would be awesome if it were fleshed out as a full game.

Most of these games feel like dull, low-effort products, however, and multiplayer is similarly uneven. Islands has you launching small colonies of Fronk creatures at a target, and suffers from the same precision problems as games like Arrow, but it's still enjoyable in that you can attempt to muck things up for other players by knocking their creatures off the board. Disco is a simple two-player pattern-mimicking game where you try to copy another player's set of controller commands set to funky music. Fruit is a game where one player tries to blend into a crowd and steal fruit while avoiding detection by other players; it's a very cool concept, but too slow-paced for a party atmosphere. Finally, Sketch is the classic Pictionary concept with a bit of wacky Wario imagery tossed in for good measure.

The final bit of the package is a Miiverse-enabled sketch-sharing program and an extension of the Sketch minigame. You can suggest and download "words" to draw quick 60-second sketches of. You can then upload these sketches for the original word suggester to admire and (possibly) giggle at. You can also check trending words to see many images that people have drawn of popular subjects. It's a cute diversion, but hardly a game seller. (You might also encounter connection errors when uploading and downloading.)

Overall, Game & Wario doesn't have the consistency or the creativity expected from the series. Seeing Wario's once-awesome microgame galleries turned into a bog-standard minigame-fest is disappointing in its own right, too. WarioWare farted in the face of conventional game design, and further installments made creative use of new control schemes without losing the pacing and craziness the original established. Game & Wario, in contrast, feels like the aged former punk rocker who has got an office job now but still wants to convince the kids that he's hip and with-it. There's still some spark of that rebellious Wario genius, but for the most part, the game seems to give up and settle for stable mediocrity. 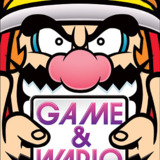