It has several problems that will dampen the experience for all but the most die-hard fans of the series.

Gabriel Knight 3: Blood of the Sacred, Blood of the Damned continues the story of Gabriel Knight, a private detective who is also the sole descendent of a family of monster hunters. Each of the two previous episodes was a traditional adventure game with its own visual style. The first, Sins of the Fathers, featured hand-drawn 2D artwork, while the second, The Beast Within, was one of the only good games to use full-motion video during the glut of FMV games in the mid-'90s. The newest chapter once again switches engines to tell a tale of supernatural horror, but it has several problems that will dampen the experience for all but the most die-hard fans of the series.

Gabriel Knight is the creation of gaming-industry auteur Jane Jensen. For this third installment, she has done extensive research into the history and mythology of Rennes-le-Chateau, a village in the Languedoc region of France and the focal point of many occult mysteries. The game weaves the Knights Templar, the Scottish Rite of Freemasonry, revisionist Catholic heresy, kidnapping, and vampirism into its complex plot, which results in a cross between Umberto Eco's Foucault's Pendulum and an Agatha Christie whodunit. Jensen has obviously done her homework, and the connections she makes between historical fact and speculative legend are fascinating.

Unfortunately, a collection of intriguing theories does not necessarily result in a compelling story. While the ideas that provide the basis for the plot are excellent, the dialogue and voice acting are not. Gabriel Knight himself is a thoroughly unlikable character, thanks in large part to a terrible acting job by Tim Curry. His fake accent and overly dramatic delivery are almost unbearable and will make you appreciate the option to replace the spoken words with subtitles. The dialogue itself is also partially to blame, as it's occasionally bad enough to sink even lower than the bad speech. The script is filled with supposedly funny lines and double entendres that are painfully witless.

As in the previous installment of the Gabriel Knight series, you also assume the role of Gabriel's assistant, Grace Nakimura, at certain points in the game. Her speech is delivered more convincingly, but sometimes it's just as poorly written as Gabriel's. Both characters' response to any situation, no matter how grim, is relentless sarcasm, which would be hard to take in a two-hour movie, much less a 60-hour game.A complete lack of suspense further undermines the story. The plot moves forward at a leisurely pace: Although a baby has been kidnapped, a few murders have occurred, and vampires are afoot, these events never seem particularly dangerous or urgent. This is partly due to Gabriel and Grace being so glib, but it can also be attributed to the game's graphics.

Gabriel Knight 3 is the first in the series to feature a fully 3D engine. It's serviceable in terms of drawing geometry but seems to be missing any kind of complex lighting effects. As a result, every scene is flatly lit and utterly lacking in atmosphere. While the environments are accurately modeled and based on actual locations, the uniform lighting and blurry texture mapping make the game feel more like a simulated architectural walk-through than an occult mystery. In fact, the full-motion video of The Beast Within would have actually been more suitable than Gabriel Knight 3's graphics engine.

The game is structured as a series of sequences that take place across three days of investigation. Certain actions must be taken to advance the story to the next sequence. Early on, the game forces you to solve some puzzles that are ludicrous even when measured against some of the genre's weakest examples. Fortunately, the puzzles generally get better as the story progresses. For example, Grace must solve a series of 12 riddles later in the game by scanning physical evidence into a laptop computer, researching esoteric topics in an occult database, and then analyzing her findings with the help of some translation and mapping software. These riddles make up the bulk of the middle and later sections of the game, and while some of them are pretty difficult, they at least make sense in retrospect.

By the time you've finally finished the game, you won't necessarily be eager to start over again. But if you are so inclined, Gabriel Knight 3 actually has a lot of replay value. Many scenes and items are entirely optional, and scenes can play out in several different ways depending on what you've witnessed and what objects you've collected. Solving the game with a perfect score will definitely take more than a few attempts.

As a whodunit, Gabriel Knight 3 is a letdown. The identity of the villain becomes evident early in the game. It's more of a whydunit, and the "why" is the most interesting part of the story. It's a traditional adventure with some excellent plot elements, interesting challenges, poorly written dialogue, and below-average acting. The 3D engine is more of a gimmick than a true improvement, and along with the dialogue, it actually manages to detract from the sort of atmosphere that a compelling, interactive horror story needs. At one point in the game, a character angrily tells Gabriel Knight to "Shut the hell up." It's a shame that this minor player is the cast member you'll be rooting for. 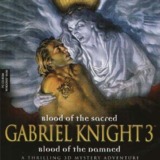