You stomp (or hover) around eight different sections of Los Angeles, blowing up everything in your path.

Future Cop: L.A.P.D. began life as a sequel in EA's hit-and-miss Strike series. But as the game's development progressed, it became apparent that the game really wasn't at all like the previous games in the series. Instead of cruising around various real-world locales in a helicopter and blowing up terrorists, Future Cop puts you in the seat of a mech that can transform into a hovercraft. You stomp (or hover) around eight different sections of Los Angeles, blowing up everything in your path.

OK, there is one major malfunction with Future Cop, so let's just get it out of the way before moving ahead. When you die, you return to the very beginning of the level. Now, these levels aren't short in any way. So when you finally do get blown up, you'll have to trek through the level and destroy everything all over again. It really makes playing the game incredibly frustrating, occasionally to the point of turning it off in disgust.

Other than the obvious problem, the gameplay is just fine. The control is very slick and easy to pick up. Your vehicle has three different weapons, each of which is useful in different situations. As you progress, you'll be able to put different weapons on your gear, but their uses usually remain the same. The game's autotargeting is a nice touch. A laser sight protrudes from your mech, allowing you to target offscreen enemies with ease.

There are two different modes in Future Cop, both of which can be played alone or with a partner. The main mode sets you down in Los Angeles, and you've got to truck across eight different levels to win. Precinct assault mode is a very, very different game. It has a capture-the-flag-type feel to it. Each player has a base with various buttons. Each button constructs a different type of unit, be it a tank, a helicopter, or other, larger units. Building units cost points, which you get for destroying the other player's units. There are also neutral turrets throughout the arena, which can be claimed by getting near them and pressing the action button. The aim of the mode is to get one of your tanks into the opposing player's base. These tanks sort of defend themselves, but pretty much just point at the enemy base and keep moving until they make it or get blown up. When playing against the computer, your opponent will be Sky Captain, a flying drone with a pretty amazing voice.

The graphics in Future Cop look nice. There's some decent light sourcing used throughout the game, and most of the buildings and enemies look nice. The explosions are a high point, both from a graphical as well as an aural standpoint. The rest of the sound effects are also very good.

Overall, Future Cop is a good game. Returning to the beginning of the level after dying really hampers the main game, but the other mode is really outstanding. Definitely worth checking out. 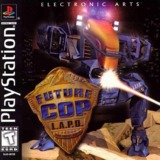 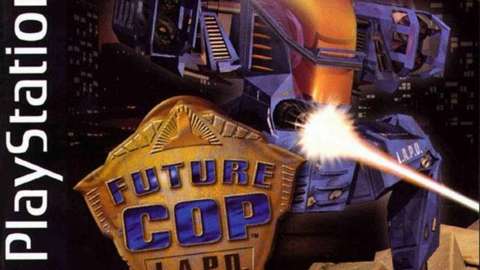 You stomp (or hover) around eight different sections of Los Angeles, blowing up everything in your path.