Fuse is a slick third-person shooter that is just fine to play solo, but a lot of fun with friends.

Video games are packed with mercenaries. The term encompasses heroes and villains, fortune-seekers and power-mongers, faceless grunts and stars of the show. It can be hard to stand out among the crowd, but fortunately for the protagonists of Fuse, they found some very cool weapons to steal. Whether you're encasing enemies in black crystalline deathtraps or vaporizing them with a pulse from your protective shield, it's a lot of fun to team up with friends and take on the challenges of Fuse. Alone, the tepid campaign neither excites nor bores, while the horde-like Echelon mode is all but impossible without at least a few leveled-up friends. Regardless of what mode you play, "with friends" is definitely how this slick near-future shooter thrives, delivering a solid team-based experience with just enough style and substance to keep you entertained.

The campaign follows a team of four mercenaries who take a job to infiltrate a high-security research facility. When things go sour and a nasty alien element called fuse ends up in the hands of some very bad people, the team members do what they must to remain the heroes of this boilerplate action-movie plot. The narrative treads predictably down well-worn paths, showing occasional glimpses of character that make you wish for more. Though the main characters and a few villains are expressive and visually appealing, their personalities are disappointingly limited. At best, they make you smirk with amusement from time to time.

The environments are similarly serviceable, spanning industrial installations and military outposts that offer decent variety but few moments of beauty or intrigue. A well-appointed jungle compound and a mountainous gondola ride are visual highlights in a campaign largely spent in places that value function over form. Most areas are a bit bland to look at but are well designed as combat arenas. Plentiful cover positions and regular flanking opportunities encourage you to move around in combat, exploiting angles and using team tactics to take apart your foes.

Fuse is a third-person, cover-based shooter, and you do spend a fair amount of time moving in and around cover. Fortunately, the controls respond adroitly and make you feel nimble when maneuvering around barriers, allowing you to remain shielded from enemy fire. Movement out in the open can be a bit sluggish, but on the whole, the core action feels crisp, if very conventional.

That is, until you start flexing your character-specific skills. Jacob's crossbow is the most straightforward of the bunch; it focuses on dealing massive damage to single targets, though he can eventually detonate his shots to set nearby enemies on fire. Izzy's assault rifle fires black pellets that, with enough hits, trigger the instant growth of jagged crystal prisons. Enemies trapped within these structures can be easily shattered, though they escape and come for you if you leave them unbroken.

Like Izzy, Naya must also reach a critical mass of hits before her weapon's effect is triggered. Once she does, the target vanishes in a resounding implosion that leaps to any other enemy tagged by Naya's fire, creating an impressive chain of singularities. The final character, Dalton, has the strangest weapon of all. His device generates a large rectangular shield that can catch bullets and grenades, then throw that potential damage back in his enemies' faces. He eventually gains the ability to deploy shields as well, making him a powerful asset in tough fights.

A few other abilities round out the battlefield tactics that you can employ. Izzy can throw a med beacon that heals or revives allies, while Naya can turn invisible for stealthy incursions. Friendly shots fired through Dalton's shield receive a damage boost, given the right skill upgrade, and this boost can make an important difference when you are beset by enemies. When you kill an enemy, the experience points you've earned flash onscreen along with specific monikers like "warpflash" and "shatterburst" that describe different combo kills. These arcade-y touches add some nice flair to the sharp visual effects and combine with some good sound effects to imbue combat with a little extra impact.

In addition to your special weapon, you get a primary weapon, a sidearm, and grenades. This all adds up to a formidable arsenal, but using each character's unique skills in complementary ways is the most enjoyable aspect of playing Fuse with friends. The campaign is smooth sailing when you have a human teammate or two, and the AI is quick to revive you when you get overwhelmed. Rely on the AI for more than that, though, and you're in trouble. They don't reliably bring effective fire to bear on enemies, and they infrequently make use of combo attacks. You can make fine progress in the campaign alone, but Echelon mode is a whole different story.

In Echelon, you take on waves of enemies, sometimes defending an objective or taking out a tough mech target. Clearly calibrated for teams of leveled-up characters, Echelon mode is a death sentence for the solo player, even a maxed-out one. As you use each character in your roster, they get stronger and unlock new skills and attribute bonuses (AI companions level up as well, albeit more slowly). Along with the purchasable team boosts, these improvements can make a big difference in Echelon attempts. It's a mode targeted at players who have played a significant amount of the campaign, and who can use team tactics to survive against tough odds.

But luck factors in as well. Sometimes you have two mechs spawn on a defend-the-objective map, and if one or two players go down in the chaotic cluster of combat, the swarm of foes keeps you down for good. Other times you might have leftover power weapons liberated from crates or previously defeated foes, and beating down the big bad guys becomes a breezy affair. Your Echelon experience can vary widely from match to match, and this haphazardness can be unpleasant. It's no fun to feel like you have no chance.

Still, the challenge of Echelon is a welcome one for folks looking to flex their skills beyond the bounds of the campaign, and if you've got some willing allies, you can definitely have a good time. And that's pretty much true for the whole game. Fuse is calibrated for people to play together, designed in such a way as to be merely serviceable for solo players, but solid fun for groups of gung-ho mercs.

View Comments (274)
Back To Top
7
Good
About GameSpot Reviews 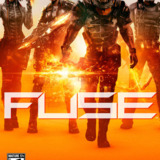 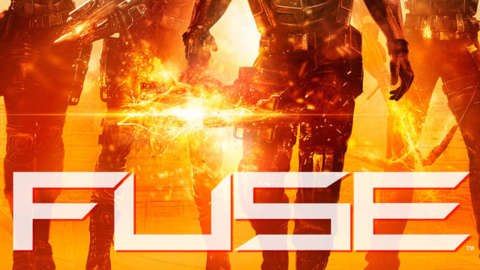 Fuse is a 4-person co-op story-driven action game that invites players to experience what happens when humans access alien technology they were never meant to have.