Ten Hammers maintains a great presentation and adds some minor control tweaks, but overall you're left with a strategy experience that feels very familiar if you played the first game.

When the original Full Spectrum Warrior was released in 2004, it was billed as a realistic military simulator developed for the US Army to teach squad tactics. As a commercial game, it had its own charm with its unique control systems and nice presentation, but ultimately the gameplay felt a little shallow and the control scheme overly restrictive. The sequel, Full Spectrum Warrior: Ten Hammers, offers some minor tweaks to the design as well as a new adversarial multiplayer mode. In spite of these changes, Ten Hammers, for better or for worse, feels like very familiar territory.

Ten Hammers once again puts you in control of infantry fireteams trying to restore order in the fictional country of Zekistan. From the environments in the game, which range from dusty towns to docks in a swampy area, it's pretty safe to assume that Zekistan represents a stereotypical, war-torn state in Central Asia or the Middle East. These environments are generally well detailed, with numerous buildings, wrecked cars, and other bits of debris strewn about that not only breathe life into the world, but also serve as useful cover. Certain portions of the environment (like oxcarts, cars, and boxes) are destructible, which also factors into the gameplay. The detail extends into the character models, which animate smoothly when they run, move into and out of cover, and open fire. Ten Hammers' 12-mission campaign is split up into four chapters, each of which has a lengthy cutscene to tell the game's story as you switch back and forth between a British and American unit. Unfortunately, the writing and voice acting in these chapters is pretty cheesy.

You'll control more than just infantry in Ten Hammers--many missions will let you take control of an armored vehicle or specialized infantry, like an indigenous scout, as a third unit. In the case of the armored vehicle, you'll have many of the same movement and precision fire options as you do with a regular fireteam. These Bradley vehicles are great for eliminating infantry with small arms, but they're very vulnerable to RPG fire. The indigenous scout can be useful as an extra set of eyes, as he can spot enemies from far off without arousing suspicion.

As in the original game, you don't directly move any characters in Ten Hammers. Instead, you issue orders to (usually) a pair of four-man fireteams using a context-sensitive cursor. You point and click the cursor at a spot on the ground. A delay ensues, which simulates the time delay for the sergeant to order his fireteam, at which point they'll run to the spot you designated. The trick is to always move your teams from one piece of cover to another, while the other team covers them. The cursor will snap to any piece of nearby cover, like low walls and corners, which makes it easy and convenient to set your teams up in ideal places. You'll still set up fire sectors by pointing your troops in a general direction. Ten Hammers offers a new interface feature that lets you designate a move point for one team from the perspective of a different fireteam. This feature makes it even easier to execute the bounding overwatch maneuvers that are so key to keeping your men safe from enemy fire while moving. There's another new feature that lets you easily split your four-man teams up into pairs, so you can perform more-complicated maneuvers. However, it's not always to your advantage to split up your teams. Since the volume of fire you can pour on an entrenched enemy determines their level of suppression (and thus, their ability to accurately shoot back at you), splitting your teams into pairs can be disadvantageous at times. The flexibility is nice, though.

The other main difference in control between Ten Hammers and the original game is precision fire mode. In the first Full Spectrum Warrior, there was no way to take control of individual soldiers and fire their guns. The only weapons you could aim manually were smoke and frag grenades, and M203 rounds, which is still the case in Ten Hammers. However, in this game, you can take individual control of one of your fireteam members to aim and shoot at entrenched enemies. Doing so with different members of your fireteam yields different results. The team leader and rifleman can shoot at and eliminate an enemy when he pops his head up from under cover, much like a sniper. The automatic rifleman can lay down a withering hail of suppressive fire with his machine gun to keep an enemy pinned down--this drains his ammo very quickly, however. The grenadier fires his underslung grenade launcher, which is great for eliminating two or more nearby enemies, or for getting at targets inside a window. This isn't much different from calling for a grenade launcher strike in the first game, but this time your grenadier doesn't have to step out from behind cover to shoot. Unfortunately, there are many cases where firing from behind a wall that's too high, or firing from a window, will result in the grenadier blowing himself and the rest of the team up, which can be very annoying. It's worth mentioning though, that precision fire mode isn't the same as aiming the crosshair and shooting the gun yourself. What you're doing is holding the cursor over an enemy, and after second or so, a red dot will pop up that indicates you're ready to fire. Hit the button, and a split second later, your man will shoot. If the enemy isn't completely out of sight, he'll die. It's effective enough, but it feels like a strange compromise between the first game, and just giving you the ability to shoot the gun yourself. It's almost as if the designers still wanted to keep a thin layer of abstraction there to maintain the idea that this is a tactical game, not a shooter.

Despite the tweaks in interface, the campaign in Ten Hammers ends up feeling a lot like the first game. You'll sweep through areas infested with enemies, eliminating them through suppression and flanking maneuvers, or in many cases, just using precision fire mode, which trivializes many encounters. This time there are buildings that you can get into and garrison for an elevated fighting position, which is another slight improvement over the first game. But for the most part, you're still killing all the insurgents you can find on a given level while moving through a linear-feeling map that offers a few wide-open expanses for tactical maneuvering. The AI-controlled enemies are not quite an improvement from the first game. They're definitely more active, though, as they move around a lot. However, this behavior seems inexplicably random. Sure, they'll smartly run from a thrown grenade, unless they're being suppressed. Sometimes they'll even flank you. But they'll often run away from a perfectly good bit of cover to another piece, just for the sake of it, and get gunned down as they're doing it. Sometimes they'll run straight at and past your position, and your squad will somehow miss while shooting at that enemy who's running into point-blank range. These lapses in AI are frustrating when they happen.

The game still does a great job at conveying the chaos of a pitched battle. The staccato report from automatic-weapon fire is nice and sharp, and you'll even hear muffled shots being fired in the background that do not correspond with your fire or shots from the enemy--this gives the ambience of being a small part of a larger conflict. You'll also hear quite a bit of cursing from men who are under your control, which ramps up along with some dynamic music as the shooting begins. If, for some reason you're opposed to excessive cussing, this game is probably not for you. But given that you're playing a war game where enemies vaporize into a red mist when a grenade goes off near them, cussing's probably not going to be the foremost concern on your mind.

The campaign should keep you occupied for about 10 to 12 hours, and once you're done with that, you can increase the difficulty, which forces you to be even more careful about your maneuvering. A new adversarial mode, playable for up to eight players over system link or online, is available. This mode is somewhat similar to the squad-maneuvering multiplayer in Brothers in Arms, as you'll still be controlling your troops in the same way as in the single-player game. But this time around, the two sides are not symmetric. The American troops move in fireteams and have better weaponry, along with the ability to heal wounded units at captured medical stations. The insurgent side moves around as single units, but has the advantage of numbers and the ability to recruit more from NPC civilians on the map. These matches provide an interesting complement to the single-player game, but given the limitations in control, it's not necessarily that compelling to play, as battles can boil down to who spots whom first. The two player coop mode from the original game also returns here, and allows you to play most of the campaign missions with you and a friend each controlling a fire team.

Full Spectrum Warrior: Ten Hammers provides some interesting control upgrades, as well as a longer campaign, plus an adversarial multiplayer mode to play online. However, the overall feel of the game is still very similar to the original, which should please those who liked the first one, but may turn off those who are looking for a bigger leap. Controls that are still overly abstract and unwieldy at times, as well as uneven AI, make for a product that ends up being much more interesting as a design idea than as an actual game. 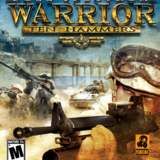