Boars are well known for their ability to solve puzzles. It's rivaled only by their talents as miners and archeologists. Full Bore: The First Dig puts this analytical ability to the test, inviting you to push and dig your way through its open world in search of gems while uncovering a story that is darker than its charming animation would have you believe.

More than anything else, Full Bore is about manipulating blocks. While some puzzles are of a straightforward "dig here to get a reward" variety, others demand careful planning and require you to think several steps ahead about where you might push one block or dig through another. You can stomp, which can have different effects on different nearby blocks (such as knocking down loose sand blocks), and you can build momentum into a sort of speed boost by digging the same types of blocks continuously, but for the most part, you move up, down, left, or right. You cannot jump, which makes it important to push blocks into steplike formations.

Despite initial appearances, this is not a game in the vein of Terraria or Steamworld Dig. While those games emphasize exploration and the upgrading of tools, any digging you do in Full Bore is in the service of puzzles, using different blocks to reach different places. Make no mistake: this is a puzzle game, not a digging simulator.

That said, the environment is open and free to experience in a relatively nonlinear manner. You explore the world of Full Bore in a Metroidvania-like fashion, but the catch is that you do not gain new abilities along the way. You never find an upgrade that lets you dig new types of rock or navigate the world in a different fashion. Your progress is halted only by your own ignorance of the game's full range of mechanics. Aside from a few early button prompts to teach you the basic controls, it's up to you to learn how different blocks work and how you can get around with no real tools at your disposal. Finding your way around the world is easy. A handy map always keeps track of your progress, and a mysterious area full of creepy shrines allows you to warp around at will.

The key advantage of this openness is that if you ever find yourself terribly stuck you can probably move on anyway. Don't feel like solving a particular puzzle? There's a good chance you can skip it. While you must still be clever in how you get from place to place on your adventure, almost all of the tougher puzzles are optional and can be bypassed without a second thought. This helps avoid the frustrations of blocked progress, though you might have to do some tedious walking to return to a puzzle you skipped earlier. In fact, it can be fun to go back to the beginning of the game and realize how many puzzles and passageways you obliviously meander past before you knew how everything worked. Finding a well-hidden door to a new area can be exciting.

There is one notable obstruction to the joy of relaxed discovery: a forced race against a drill that forces you to think fast rather than take your time. While at first this action sequence seems like a nice change of pace that demands speed as well as brains, it ends up being one of Full Bore's most frustrating detours. The puzzle requires carefully pushing blocks on top of each other as a stack, and one wrong move can ruin the entire thing (while you can reset to your last checkpoint, there is no “undo” button). The window of time you have to solve the puzzle is tiny, giving you little time to move and less time to think. As a result, I banged my head against the boxes repeatedly (literally, in the boar’s case) until I finally lucked into a solution. Normally I would have been able to skip such a frustrating experience, but it wasn’t an option in this case.

But not every puzzle is equally frustrating, whether timed or not. Solving certain puzzles made me feel like a genius for working out the proper logic, such as when I methodically rearranged two columns of levitating blocks to form a bridge. When the game sticks firmly to its mechanics, there is genuine joy in piecing its secrets together.

While having an expansive world to explore has its upsides, the problem with this freedom is that there's little impetus to solve any given conundrum. Since most of the puzzles aren't gating your progress, they instead serve as the path to collectible gems and pieces of lore. The lore speaks for itself; if you want most of the game's backstory, you should seek out the computer terminals hidden throughout the game. These terminals vaguely explore a deeper mystery hidden within the caves, which might involve science experiments gone wrong and potentially the extinction of the entire human race, and shed narrative light on the weird temples and shrines you glimpse. Gems, on the other hand, have no apparent value other than raising your completion percentage. Why should you spend time collecting them, other than because they're there?

This lack of impetus to push forward might be a symptom of the fact that Full Bore: The First Dig is only part one of a full game. Paying for one gets you both--like buying a season pass for an episodic game--so you don't have to worry about being charged extra to see the ending, but as it stands now, the game ends abruptly and unceremoniously, telling you in no uncertain terms that "this game isn't quite finished yet." It's possible there is a point to gem collecting that isn't made clear until later. It remains to be seen how well part two will hold up (and hopefully it will offer new mechanics and not just more of the same), but even considering only the content in First Dig, you're getting several hours of puzzling adventure.

Full Bore's bluesy music is catchy, the animations are equally charming and unsettling, the puzzles are often fun to solve, and there are hints of a good, dark mystery behind the greater plot. If the back half of the game (expected to be released later this year) expands on the first half's foundation, it might prove an excellent package, but you should consider conducting an expedition posthaste in any case. There are intellectual riches ready to be unearthed. 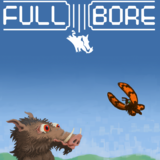 Britton Peele has never been a boar, but he has always had a fondness for solving puzzles and for digging holes haphazardly. He uncovered roughly 65 percent of the secrets hidden underground and reached the end of the game before writing this review. 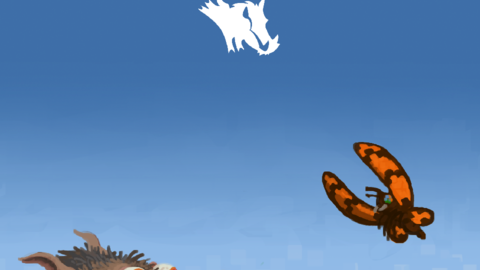 Full Bore is a block puzzler with an exploratory twist.