Full Auto is a neat idea, but unfortunately it's just one neat idea, stretched across the entire game. And that wears thin pretty quickly.

While we've seen plenty of racing games on the Xbox 360 and plenty of combative games as well, we've yet to see a combination of the two. The system gets its first car-combat game in Full Auto, a racing-while-shooting extravaganza from Sega and Pseudo Interactive. Full Auto has its heart in the right place, but without enough variants on the core theme, you'll run out of gas long before it runs out of objectives.

In Full Auto, you're put behind the wheel of a car with two weapons mounted on it. Most often, that means you'll have one front-firing weapon and one rear weapon that's dropped behind you. As you play through the career mode, you unlock more cars and more weapon configurations. So you'll start with a machine gun up front and mines behind, but you'll eventually get rocket launchers, smoke screens, rear-firing grenades, a shotgun, and so on. You don't individually pick weapons; instead, you pick them in sets of two, and this is how the developers attempt to keep things balanced--though, naturally, the weapon sets you get later in the career mode are more powerful than what you start with.

Your goal in each race is slightly different, but for the most part, you're just going to always want to finish each race in first place. Aside from your own personal driving skill and your weapons, you've got some other tools at your disposal. Sliding out around corners fills a boost meter. When it's full, you can bust out a turbo boost. And you also have an "unwreck" meter that you can use to rewind the action for a few seconds, and then pick up the action a second or two before you made some horrific mistake and correct it. In theory, applying the time-control mechanics found in Blinx, Prince of Persia, or a TiVo to a racing game is a neat idea. But the racing physics are loose enough that you only really make huge mistakes when you're first learning a track. So that limits unwreck's usefulness a bit, because you'll eventually get to a point where you don't really need it.

There are multiple race types and car classes in Full Auto. Different races include the standard lap-based races, point-to-point races, knockout races where the last-place racer on each lap is eliminated, rampage races that fill the track with target cars for you to take out, and down-and-back, where you race to a point, turn around, and race back the other way. In the career mode, you'll take on these events to earn medals and unlock new cars, paint jobs, and new events. The career mode is fairly lengthy, but it's roughly the same action from start to finish. For the most part, you're just racing and shooting the whole time, which isn't nearly as exciting as that might initially sound. More variety, either by giving up more tracks to race on or by concocting more interesting events, would have really helped. You'll unlock just over 20 cars, each with their own ratings in durability, which governs how long your armor lasts when you're getting hit, as well as handling and speed. Naturally, the faster cars also tend to not be able to take as much damage.

In addition to the career mode, there's an arcade mode that lets you race on anything you've unlocked. There's also a two-player mode, which doesn't do the frame rate any favors, but it's still playable. The game also has online play via Xbox Live for up to eight players. The online works just fine and gives you most of the same options you get in the offline game, though the time-shifting unwreck ability isn't available online. The multiplayer is functional, and it offers leaderboards and all the standard Xbox Live stuff you'd expect. It just isn't terribly exciting, though, and doesn't add much to the overall package.

Graphically, Full Auto looks sharp when it's not moving. The car models look nice, they're shiny, and they get banged up quite well as they take damage. Unfortunately, the game just doesn't maintain a smooth frame rate. It's often choppy, especially when the game zooms up close to an exploding enemy for a quick look at what your destructive antics have caused. That also makes the game feel sluggish. It really doesn't deliver a very good sense of speed. The explosions, however, usually look pretty nice.

Soundwise, the game has the average set of sound effects you'd expect from a game that includes both cars and weapons. The soundtrack is comprised of electronic music that defaults to a very low volume during races, so you'll hardly notice it's there at all. There's also a very annoying bug that prevents you from using custom soundtracks. Any time you hit a loading screen, your music source automatically reverts to the game's default soundtrack.

Overall, Full Auto doesn't have enough variety to remain entertaining for very long. You might want to rent it and mess around with it for a few days, but the career mode gets repetitive well before it ends and the online doesn't bring much to the overall package. The game just has a one-dimensional feel that it never seems to shake, regardless of how many times you try to rewind time and fix it. 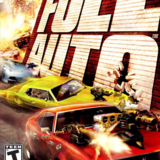 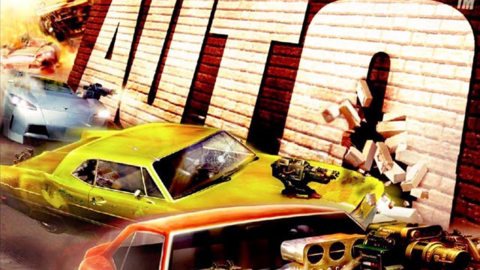 Racing and combat combine in the arcade-style racing game Full Auto. You can choose from 20 cars and 10 different weapons, which can be used to outrun and outgun your opponents.