A pneumatic leg slams into a neon breastplate, dislodging a ball with curious, flattened sides--futuristic-looking in that characteristically impractical sort of way, like a concept car with inaccessible wheel wells. It’s a turnover in favor of Sporting Automata, and one of its robots lumbers into the phosphorescent glow of the end zone, where it spikes the ball and does a few celebratory sit-ups.

This is Cortex, an object lesson in a brand of futurism that's surprisingly hard to come by in the world of electronic sports. Its gridiron is littered with extruded geometries and embossed with cosmetic circuitry patterns. Broad-shouldered athlete-simulacra smash into each other like promo animations for the NFL on FOX as their head coach/Matrix operators look on, bottom-lit by monitor glow. It's a wildly speculative vision of what sports could one day be. It’s the kind of thing you used to see a lot more of earlier in the digital era, and a far cry from the current tack of e-sports with its gently iterative shooters and fighting games.

Frozen Cortex's other hereditary through-line runs straight back to football. In a planning phase prior to any action, two players simultaneously slip step-by-step instructions to their team of five robots, setting up running routes, passes, blocks, or zone coverage. The goal is to score by reaching the thin strip of the end zone or crossing smaller "extra point" tiles strewn across the randomly generated maps. Waypoints can be laid down with simple clicks of the mouse, and a bot will faithfully trace a direct route through them to the end of its line. With a full set of paths and nodes diagrammed out for the five robots, the traditional playmaking X’s and O’s here begin to take on the look of an electrical schematic, and it’s easy to imagine some subsequent Frozen Cortex ‘16 version introducing stutter-step resistors and spin-move inductors, or maybe a "battery" symbol for a stiff-arm to the face.

A lot of Frozen Cortex’s tactical potency is owed to the fact that it allows players to sketch out and demo their opponent’s game plan exactly as if it were their own. It’s a subtly brilliant little inclusion that opens up the opportunity to tailor-make counters to highly specific plays. Of course, the awareness that your opponent can just as easily construct a 1:1 model for any play you might conjure up ends up bleeding into your strategic subconscious, too. Against a well-versed player, a match of Cortex becomes an exercise in recursion: "They’ll be expecting the obvious pass--but they’ll also be expecting that I expect that they expect the obvious pass. But then again…"

You can imagine the effect this can have on turn length. Outside of a specialized mode with a thirty-second play clock, players can take as long as they want--days, even--to submit their move. But it’s all well accounted for in Frozen Cortex’s elegant matchmaking system, which allows you to field multiple games simultaneously and even enable email notifications in case your turn comes up while you’re away. While the server population never seems to stretch beyond thirty players at a given time, games are easy enough to come by. The measured, deliberate pace seems to attract a crowd that's more genial than most, if sometimes prone to "forgetting" about your match soon after you burn them for a big score.

This all means that it only takes a match or two to pick up the fundamentals, which is as long as I can recommend bothering with Frozen Cortex’s single-player mode.

With both players’ interpretations of the ensuing play in hand, the game crashes them into each other and films the resulting chaos like Jake Gyllenhaal’s creepy Nightcrawler cameraman, tailing runners with an uncomfortably narrow chase view or leaping sideways to frame the secondary getting burned on a long pass. A quibble, but it’s easy to lose track of a robot during these rare and irregular perspective changes, especially when a given part of the playing field so often looks like any other.

Learning to respect the deep ball is the first harsh lesson in the education of a Cortex player. A bot can hurl the rock from one end of the small field clear to the other--as long as there aren’t any tall blocks in the way--and drop it in the end zone to be caught or picked up by a nearby teammate. The longest passes freeze at their apex, ending the turn. This ostensibly allows the defense time to swoop in for an interception, but the effect is like a crystallization of that wonderful moment when an NFL cameraman begins that telltale, frantic sideways pan--the moment anyone watching suddenly realizes that something’s just gone dramatically wrong (or, less often for a Texans fan like me, right) in the backfield.

Unlike passes, runs draw out through the full length of a turn. True to real football, they’re the grind-it-out option, leaning on the cumulative effect of bonus point tiles for a win by attrition. Because of the idiosyncratic way that blocking works in Frozen Cortex, stopping the run requires a patient defense and timely risks. If it lapses enough to allow a robot to scamper through to the end zone after hitting a string of extra points, it’s a coup.

Two circles around each bot govern all collisions in a game chock full of them: one for blocking and one for tackling. A robot that’s "first on scene"--that is to say, reaches an area and goes stationary before the opponent does--will block any comers trying to run past its circle on their prescribed routes. But stationary bots will automatically bypass would-be blockers to snuff out ball handlers that enter their larger tackling radius. It's a strategic wrinkle that forgoes the random number generators so endemic to sports games in favor of something more aboveboard and ultimately more intuitive, too.

This all means that it only takes a match or two to pick up the fundamentals, which is as long as I can recommend bothering with Frozen Cortex’s single-player mode. There are two main formats: a one-and-done "Knockout" mode and a standard single-season league. In league play, the AI provides stiff initial competition, but it quickly fades as you use the perfunctory free agent system to outspend it on new robots with better stats. There’s an overarching text-based narrative involving an investigation into thrown matches, but it goes nowhere fast and rings especially hollow because Frozen Cortex actually allows you to bet against your own team and throw the game without consequences.

It's weird to cite a game for trying to go deeper or tell a story. But the futuristic coating that Frozen Cortex paints over its sport works best as a surface treatment. And if you don't cut into it, it looks great. The teams have slick, expressive names like "Heavy Perspective" or "SXT Vision," and their logos look like the glyph symbols in Blade that denote secret vampire rave nightclubs. The industrial electronica tracks thrum along as naturally as a pulse. A news ticker drip feeds evocative little blurbs like "Core 4’ Teams to Meet with WRC and League to Discuss Player Rights." It's only in the actual exposition that these things end up belabored, as the league's talking heads try to pack an entire personality into each of the tweet-sized messages they send before each match.

Maybe that's a mark in favor of replacing the human element in futuristic games like this. If you could only excise all those flimsy, unreliable human bodies, with their proclivities for head trauma and contract renegotiation demands, you'd perhaps reach something purer--sport ascended from the flesh, so to speak. Bigger but more thoughtful. Gladiatorial but safe. With blitzes that play out like chess, with mechanized athletes that can pull any move if you can just hit the right combination of buttons. Some ultimate game where nerd and jock fuse together and assume their final form. 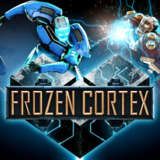 Nick Capozzoli played sixteen hours of Frozen Cortex for the purpose of this review. His favorite multiplayer match he played was a 2-0 grind-it-out victory because DEFENSE WINS CHAMPIONSHIPS. 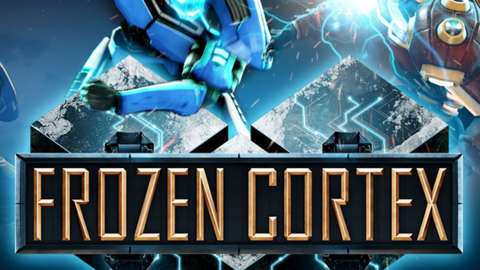 Frozen Cortex is a simultaneous turn-based strategy game from Mode 7, the creators of Frozen Synapse.