It could certainly be said that the turn-based strategy genre doesn't have nearly enough giant robot war machines with fancy German names. Square Enix's Front Mission series devotes itself to helping fill this very void, coupling tales of war and political intrigue with tactical battles featuring human-driven military mechs called "wanzers." Front Mission 4 treads much the same territory as its brethren, introducing a new gameplay twist in the Link System and keeping lots and lots of mech customization options. Unfortunately, the game loses some of its shine to some tedious pacing, some visual issues, and, in some cases, the weight of its own complexity.

The events in Front Mission 4 take place six years after the original Front Mission (the first two games in the series were not released outside of Japan). Humanity is coming to grips with a new age of modern warfare built around the mobile wanzers (for extra German effect, it's pronounced "vanzers"). When peace starts to come apart at the seams, you'll get a front-row seat from the perspective of two main characters. Elsa is a Frenchwoman and a fresh recruit to the ranks of Durandal, a civilian corps dedicated to both the research of wanzers and the new application of technology to improve their performances. Darril is a UCS--or United Confederate States--sergeant on assignment in Venezuela, sent to ostensibly help put down a succession there. However, war (and work, for that matter) really isn't his thing. While they initially become involved in separate conflicts, it soon becomes apparent that a nefarious global conspiracy is afoot, and it's up to you to restore harmony.

Nefarious global conspiracies are all well and good, but in Front Mission, the war is the thing, and at the heart of all battles are your versatile, powerful wanzers. Each wanzer can be equipped with a wide range of weaponry, from melee weapons (like rods and pilebunkers), to ranged weapons (like shotguns and machine guns), to precise weapons (like rifles, bazookas, and shoulder-mounted missile launchers), and much more. Both your own and enemy wanzers comprise four main parts: the body, the left arm, the right arm, and the legs. Each part has its own hit point value and can be damaged in battle. If a part's HPs go to 0, it is no longer functional until it is repaired. A lost arm results in the loss of use of whatever weapon it was holding, whereas a lost set of legs reduces your movement to one square (the smallest unit of battlefield movement) and makes evasive maneuvers impossible. The body is the part you want to keep your closest eye on, though, because a wanzer that loses its body--regardless of the status of its other components--is defeated and must leave the battle. Losing all of your units will result in the forfeit a battle. This is quite detrimental to gameplay, because some maps will have additional objectives for you to complete as you wipe out enemy forces, like protecting certain locations or units, for instance.

Formulating your strategy is dictated by your available amount of action points, or AP. Each pilot has a certain AP pool that you'll be working from, and all of your actions while fighting--from moving, to firing weapons, to using a repair pack--all require AP. In general, weaker attacks cost fewer AP than stronger ones. So, for example, you'd spend one AP on a melee weapon or six AP on a round from a bazooka. In addition to a given wanzer's raw offensive and defensive capabilities, pilots can gain access to special abilities via upgrades to their computers. As you defeat enemies, pilots will earn experience points that can be used to purchase these upgrades, which have a variety of effects. Some will reduce an enemy's accuracy; some will boost your attack power; some will raise your defense; and so on. Pilots can also earn link points, which enable you to use the Link System, which is basically a setting that allows your teammates to help each other out when attacking or counterattacking. You can link up to three characters for offensive attacks and up to three characters for defensive counters, and if these linked team members are within range, they will fire their weapons simultaneously. All abilities other than linking are passive, however, so you won't be able to choose when they come into play.

While the wanzers are great fun to play with and customize, the pacing of battles seems tuned to match the motion of mechs--that is, it's plodding and often ponderous. At default speed, wanzers take an excruciating amount of time to clank into position, target their foes, fire their weapons, and wait for their enemies to then slowly turn to engage them. Thankfully, you can speed this up both in the settings and by leaning on the X button while you play. But even a speedy mech takes some time to go through the motions, and some of the maps are quite, quite long to begin with. When you engage a foe, the perspective changes to a close-up view of the action, which looks great but is unskippable. As a result, expect to see your units firing their guns over and over again. As you progress through the game and gain access to better and more-varied wanzer parts and pilot-computer upgrades, the time you spend between battles getting your units up to snuff takes longer and longer as well. The wide array of equipment you can use is absolutely a lot of the appeal of Front Mission, but the sheer number of menus and back-and-forth tweaking you must engage in so that you can move on gets to be extreme.

Visually, Front Mission 4 has its ups and downs. The wanzers themselves look really good, on the whole, and feature great animation. Additionally, they present a nice mix of looks according to the parts you use and how you customize them. The characters are represented only by portraits, and there are only a few of these portraits used to represent a range of emotions. However, the art is detailed, and it gives the characters a lot of personality. (The character designer for Front Mission 4, Yusuke Naora, most recently worked on the visually appealing Unlimited SaGa.) The environments in the game combine to represent the biggest graphical offender, particularly with regard to the large outdoor areas, which, more often than not, are bland and featureless. Furthermore, they appear to be scrubbed clean of most of their color. Some areas look like little more than plain tilesets, so it's a real shame to have to lead imposing wanzers through drab, uninteresting surroundings. Since you have to spend lots of time on some of these maps, the cumulative effect of awful environments really detracts from the game.

The sound fares much better, thanks to both a very nice--if limited in variety--musical score and a wide range of good sound effects. When your wanzer fires off a burst of ammunition, you can clearly hear bullets either punching into the metal exoskeleton of your target or whizzing past their mark. Each weapon also has a distinctive sound to its fire, so you can often identify weapons simply by listening to them. The voice acting in the game, while not outstanding, is quite competent, with good emotion and inflection in the cast.

Ultimately, those most likely to enjoy Front Mission 4 are already Front Mission fans. The best points of the game--the wanzers, their customization, and their ensuing battles--are mitigated by the oftentimes glacial pacing and unnecessary obfuscation of the upgrade system. However, those with a penchant for mechs and a wealth of options for their upkeep--in addition to some patience--will find Front Mission 4 a worthy outlet for their interests. 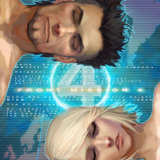